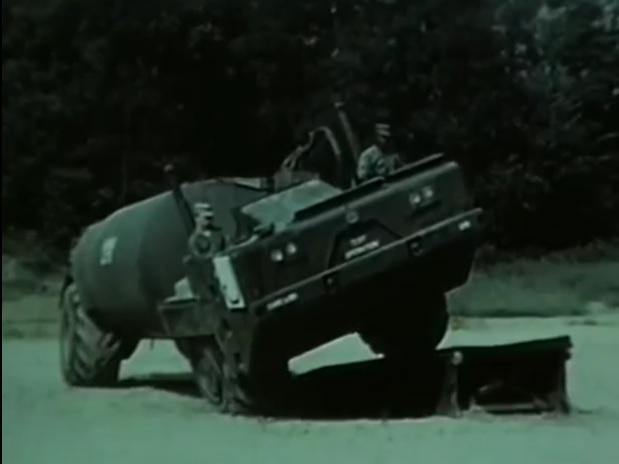 The defense industry is big business in virtually every country on Earth, American included and there are lots of manufacturing operations out there that have ties to defense that you’d never expect and some that you readily would. Take the heavy equipment industry for starters. You may not think a dump truck or a front end loader have much to do with the military but you’d be very wrong. A perfect example of this was the M520 Goer truck that was actually built by Caterpillar and used for many years by the US Army. This thing was an overgrown and bad ass version of a scraper or a bottom dump construction truck that was amphibious, unstoppable, and highly effective in doing its jobs of taking people and things to places where other trucks simply could not.

In the late 1950s the Army started to look at how they could get some of the benefits from large articulated Earth moving equipment into their program and they floated out some contracts for experimental vehicles to companies like Caterpillar, Clark, and LeTourneau. As it turned out the Caterpillar version was the one selected and after years of testing and tweaking, Cat built 1,300 of them which were used right up into the 1980s until the much more modern HEMTTs showed up.

The video below dates from the early 1960s and it shows the M520 Goer doing all different kinds of things from climbing what is basically an RTI ramp, floating across a pond, slogging through mud, and navigating through rocks and big berms. The truck you will see here is the tanker version. There was a wrecker version and a cargo version also produced to fit different roles as they were needed. Used in Vietnam, everything we have read seems to suggest that they did their job reliably and with the sure footed nature the Army hoped that they would.

Downsides? It had no suspension, like literally none. Governed at 31mph, we have read that most guys didn’t go that fast and if they did the only way to keep the thing somewhat under control was to kind of gently weave it back and forth on the road. After seasickness set in that practice could not have lasted long at all. Before finding the awesome video below we had never heard of these 30,000lb beats and now we want to go bulldoze a forest with one. Pretty cool!

The Days When Car Companies Staged Street Races And Used Them To Sell High Performance Cars Were Better Than Today (Video) Video: The Tucker Combat Car - The Other Forward Thinking And Inventive Vehicle Preston Tucker Developed