In This Episode Of Finnegan’s Garage The C10 Gets An LT4 And Magnum T56! 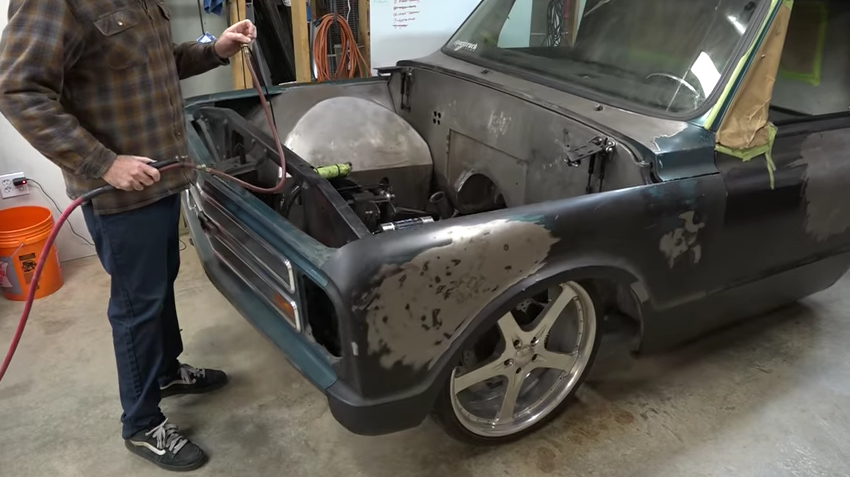 Mike Finnegan is so much cooler than any of you people out there know, if all you know him for is Hot Rod and Roadkill. In fact, if you are fans of his, only because of those two titles, he should be offended. Not you, him. You see there is an entirely different group of “hot rodders” out there that know Mike from way back. Back when he learned how to weld, learned how to cut stuff up, and learned what building something totally bitchin and bad ass, for no reason than because it made him happy, was all about. It’s called Minitrucking bitches! And it’s what got Mike started and what makes him so much cooler than most of you realize.

It’s also why the C10 in this video has something called a “body drop” on it. And why it lays the rockers on the ground thanks to a custom chassis, custom air ride suspension, and lots of trickery. My greatest disappointment in anything Finnegan related in recent years was his move all the way across the country. It spawned this adventure called Finnegan’s Garage, but it also took him so far away that I can’t come play in Finnegan’s Garage. Damn it man!

But I digress. Check out this episode as Finnegan shoves the LT4 and T56 into his C10 chassis after pulling apart more of the C10 that he originally started building well over a decade ago, sold, and then bought back. Smile, you know you’ve done it yourself. LOL

Store Bought C Clamps Kinda Suck! ChuckE2009 Shows How To Build Your Own Not The Ghia You Were Expecting: This Volkswagen Type 34 Is Rare, Mostly Original And Driven!

5 thoughts on “In This Episode Of Finnegan’s Garage The C10 Gets An LT4 And Magnum T56!”