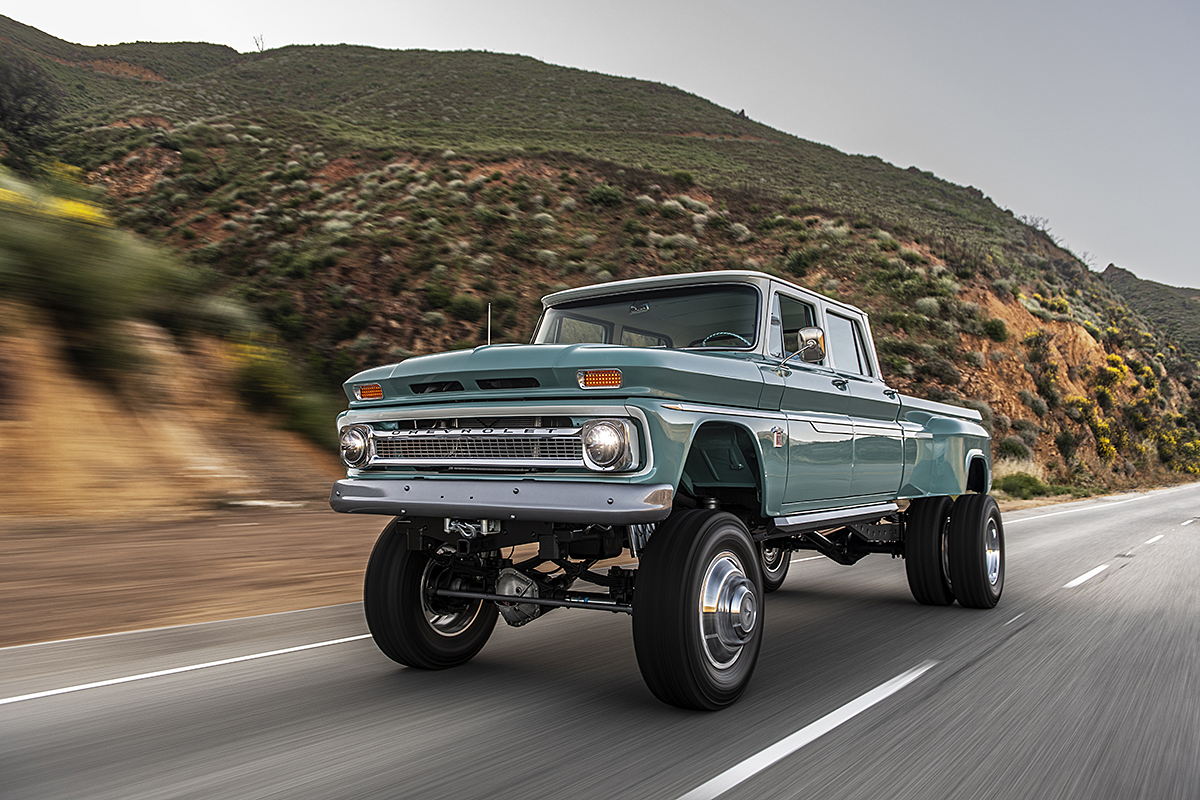 If you aren’t familiar with the crew over at Rtech Fabrications, you certainly need to be. They build trucks that never came from the factory and build them in a way that makes you question whether they started out with a stock crew cab or not. The amount of work and customization that goes into each and every one of the trucks that comes out of Rtech is staggering and you will definitely want to check out all the photos below. This thing is awesome. 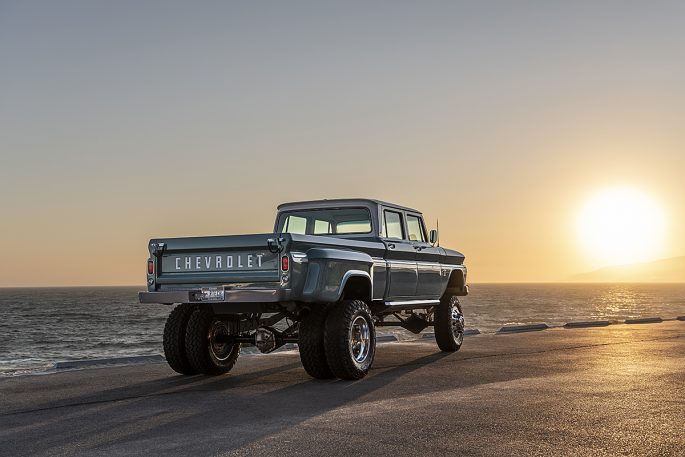 “The reaction to The Ponderosa has been exceptional,” says Rtech Fabrications Founder Randall Robertson. “The Brothers events are some of the premier Chevy truck shows in the country, and it is an extreme honor to win the ‘Brothers Choice’ award three times now: The Ponderosa this year, last year with The Duke 1972 K50 Crew Cab, and previously with Cowboy, our 1970 K20 Crew Cab.”

As with all Rtech Fabrications projects, The Ponderosa was a ground-up build. A 1972 8,300-pound GVWR C30 chassis was sourced as the foundation for the 175-inch-wheelbase Crew Cab conversion. Rtech fabricated custom mounts for the suspension and added crossmembers in the proper locations to support the powertrain components. The lift is provided by Skyjacker leafsprings. Ride is controlled by Bilstein 5160 remote-reservoir shocks and innovative Rtech rear traction bars that multi-task as lift blocks. 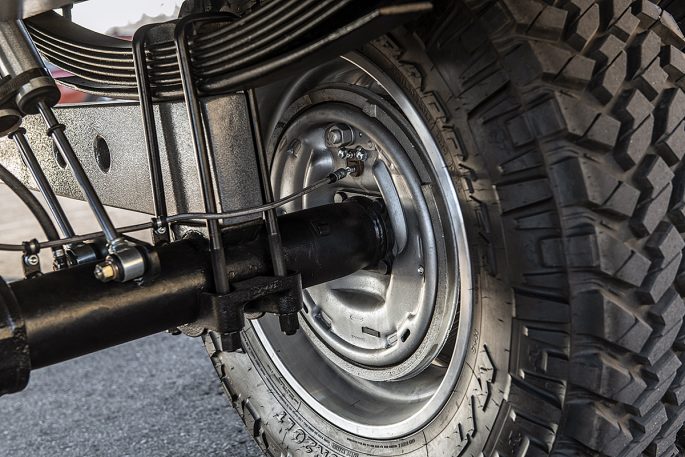 Numerous other upgrades were required to control the added weight of 37×11.50R20 Nitto Trail Grapplers duallies on 20×8.25 American Force wheels. Steering is bolstered with a Saginaw 708 box, modified by Red Head Steering Gears for increased hydraulic power. Brakes follow factory GM K30 spec: Bendix/Bosch hydroboost, front slotted/cross-drilled disc brakes and rear 13-inch drums. The front axle is a Dana 60, which has an innovative locking-hub setup that is accessed with an Allen wrench through the wheels’ center caps. The rear axle is a Dana 70; both differentials have 4.10:1 gearsets and are protected by G2 aluminum covers. Also, Rtech added its custom 60-gallon fuel tank made from TIG-welded ¼-inch 6061 aluminum. Its placement was strategically chosen for optimal weight distribution, and the tank was custom-contoured to clear suspension components.

To power The Ponderosa, Rtech went with an American-made Cummins diesel from the Ram portfolio instead of choosing an Isuzu-developed GM Duramax. A 1996 12-valve 5.9L Cummins was chose for its renowned 300,000-mile durability. Rtech built the engine to produce about 550 horsepower and 1,300 lb.-ft. of torque. Modifications include a ported/polished head, a Competition Cams camshaft, Mahle pistons, a BD Diesel manifold and upgraded turbocharger, a custom intercooler, Dynamite Diesel Stage 3 injectors, a K&N intake, and a Flowmaster 4-inch exhaust system. Cooling is controlled by a Champion 3-core aluminum radiator and dual Derale electric fans. AMSOIL synthetic lubricant increase component life truck-wide. 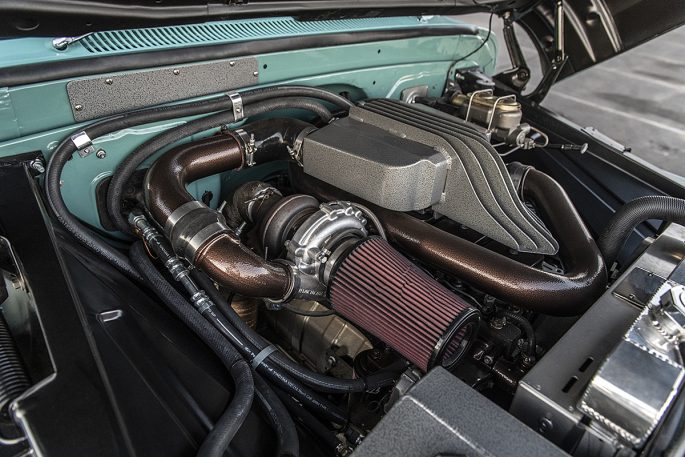 Another Rtech upgrade includes adding thick-steel tubular rocker panels for structural rigidity and protection. To ease ingress/egress, AMP Research Power Step XL electric running boards are used. Rtech makes custom brackets for them so that the Power Steps are flush to the body when retracted. As a custom touch, Rtech painted the Power Steps silverto match the custom bumpers.

Speaking of which, both bumpers purposely remain factory. The front bumper is augmented by a Warn 12,000-pound winch and a custom crossmember with integrated Class V receiver hitch. A chromed grille from a 1966 Chevy was used to further make the Ponderosa appear period correct. 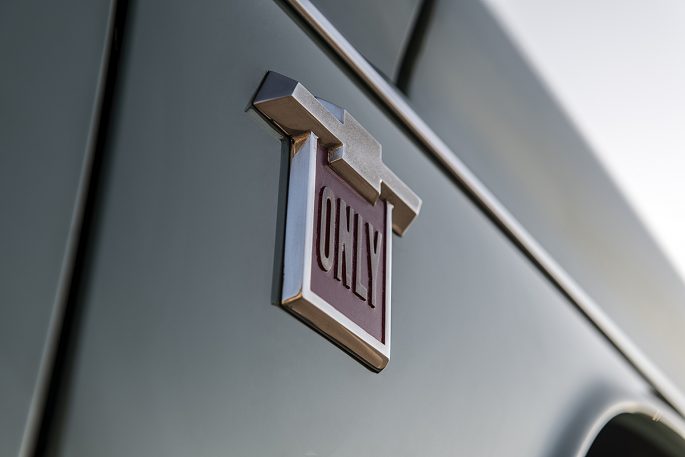 Inside, The Ponderosa combines the best of the old and the new. Rtech Fabrications executed the upholstery in factory-reproduction green vinyl and cloth in the factory 1966 GM pattern using materials sourced from SMS Auto Fabrics. Seating is 1966 GMC Sport Trim buckets, and the carpeting is Daytona-weave nylon. The custom console lid was created from a GM hood. To update the electronics, Rtech utilized a Speedway Motors wiring harness. A Bluetooth-compatible RetroSound Hermosa head unit is backed by a Kenwood amplifier and speakers. Other dash details are OE-style Dakota Digital gauges and controls for the Old Air HVAC controls. The Ponderosa also features cruise control from Dakota Digital and a period-correct nav system: a Hull Manufacturing compass.

In all, The Ponderosa 1966 Chevy Crew Cab 4×4 represents a departure for Rtech Fabrications, which is known as a 1967-1972 Chevy/GMC specialist. “One of the main cornerstones of our business is to preserve the original look of a factory-made truck from that era,” Randall Robertson continues. “Feedback from truck fans we’ve spoken to is that we achieved that and more with the Ponderosa.”

Old-School Cammers: If You Thought It Was Just Ford And Mopar, Check This Out! August 2019 Somernites Cruise: One Of The Biggest Cruises Recorded!