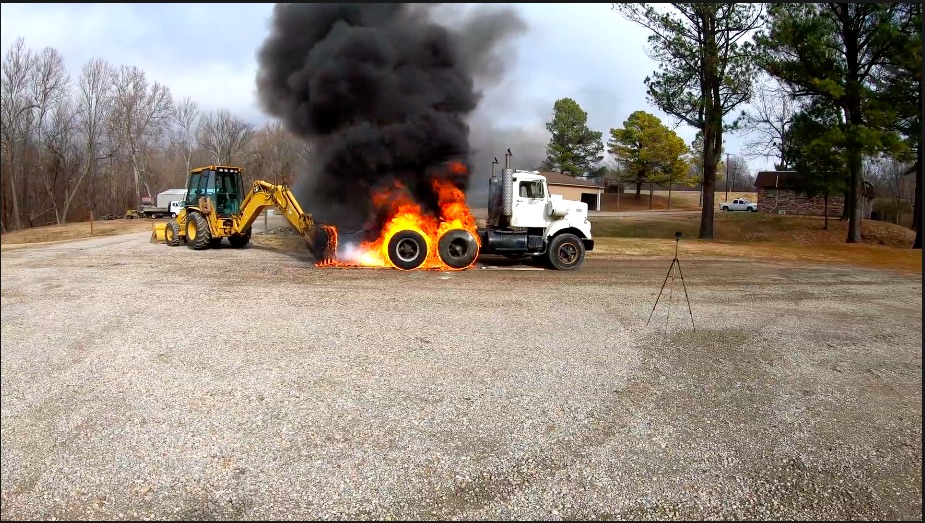 Oh, internet how we love thee. The KT3406E YouTube channel has been home to some of the most wild and awesome big rig videos ever created. These are the guys who ran a rig on ether until the engine expired, they just did an “experiment” that fed dirt into the engine of a forlorn truck until it was dead and then they pulled it apart, but this one may top them all. You are going to watch a response video that is highlighted by a 1974 White Road Boss with an 8-71 Detroit Diesel burning the tires until they literally catch on fire.

The rig is chained to a backhoe, set on some wood, and then it’s tached up, clutch dumped, and left with a cinderblock on the throttle. The smoke is copious. The noise is fantastic. The fire is cool until it really gets going and the guys do get reasonably close to actually losing the entire truck, which would have sucked out loud.

One of the closing lines in the video where the dude says, “You know its good when there’s rubber and pieces of the tire cord on the hood…” pretty well sums ‘er up. This is awesome.

Press play below to watch this blazing infero of a burnout – 1974 White Road Boss!

Vintage Viciousness: This 1986 Video From The Bowling Green National Pulling Championships Features The Huge 9,000lb Modified Class 2021 Jeep Grand Cherokee: The Fifth Generation Of The Iconic SUV Is On The Way