Hip To Be Square: This 1977 Chevy Promotional Film For The K5 Blazer Has It All, Even The Blazer Chalet! 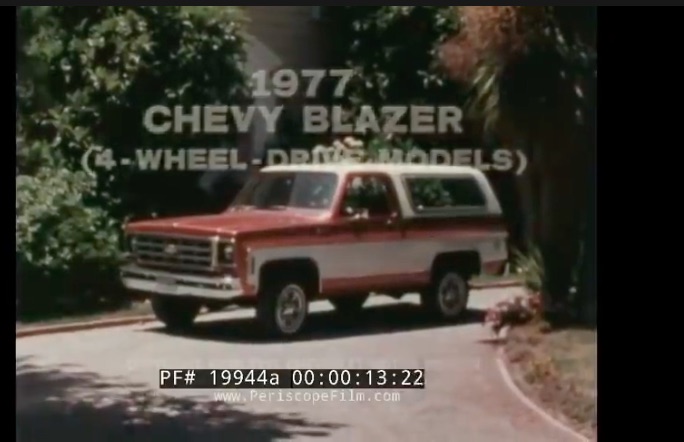 We kind of wish we had a backyard full of late 1970s K5 Blazers. Why? Because we’d be freaking billionaires. The money that these trucks are commanding now is just insane but hey, people are paying and restoring, and loving on these short wheelbase, simple, fun rigs. The film below is pretty cool because it takes us through the whole 1977 Blazer lineup from the 2WD model clearly designed for city dwellers and demonstrated by a female driver.

The neatest thing about this film is the profile of the now coveted but rarely seen Blazer Chalet package. This was the factory installed camper that had a pop up roof, room for four people and all kinds of amenities jabbed into a space that we’re not sure a normal human could even turn around in.

There’s good footage of the rigs on the street, on the dirt, in the mud, and generally being used. 1977 was the first year that the 305 was introduced. At that point it was a 2-bbl engine only and sat below the 350 and 400ci options in the V8 lineup.

This is a fun watch and boy are these things valuable now.

A More Handsome Godzilla: The 2021 Nissan GT-R T-spec Is One Of The Final Special Editions Of A Special Car Next Level: We've All Seen A Coffee Table Made With A Block and Rods But We've Never Seen One Like THIS