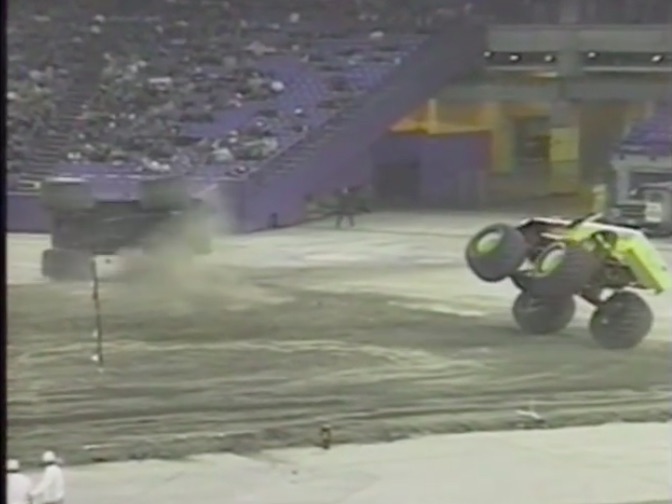 Let’s be kids again, shall we? This trip back to 1992 is great because we don’t just see the biggest names of the monster truck world engaged in battle, we see the top pullers, and the top mud boggers as well. The defining feature of this video may be the wreckage or it may be the whammy bar ripping over-the-top sound track that is 100% early 1990s.

A few things were about to change drastically in the world at the time this video was made and no one likely knew it at the time. The first would be the landscape of monster truck racing. The trucks we see in this video were in a transition period with (many of them employing) advanced suspension systems and steel bodies. It would not be long until trucks like Snake Bite would provide the foundation for monster truck racing rather than the tried and true steel bodied rigs that had been the mainstay of the sport.

The there’s the music. What we have here is a soundtrack of late inning hair metal. That program would come to a screeching halt with the introduction and explosive popularity of grunge music from the Seattle scene. The wailing and whammy bar sound track here would be pretty gauche just a year or less from when this deal was released. Such were the times.

In the world of back flipping trucks with bodies that look like dogs and lobsters, we’ll take this era of monster truckin’ all day…everyday.

Press play below to travel straight back to 1992 in all of its glory!