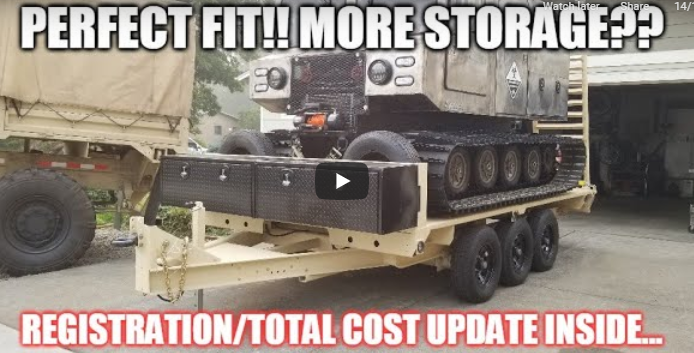 In this installment of the Army Trailer build there is some added storage going in, the build costs will be covered, more mods are being made, and the process of registering and titling this thing becomes a real chore. But it’s complete, and we think the thing is rad. We would love to be hauling this trailer behind his truck and with that tracked awesomeness behind it. Wouldn’t you?

This M1083A1 trailer build is pretty impressive. Building a triple axle trailer at home is in itself a pretty impressive project, but to take that on with the goal of adding a flatbed from an M1083A1 so he can tow it behind his army truck is taking badass to another level.

It has triple 5,000 lb torsion axles going under it and the design is pretty simple. He is calling it a short and simple build, but the videos are good because they show each “step” in the build. If you haven’t ever built a trailer, this is a good video series to watch. It’s not rocket science, that’s for sure, but you want to make sure that your axle spacing and locations are right so that the trailer will pull right and not sway. This is important regardless of the trailer size, but can you imagine one like this being set up wrong and getting out of control while going down the road? That would suck out loud.

What To Pack In Your Drag Week Or Race Week Trailer: Motion Raceworks Thought They Might Show Us How It's Done Power Tour Photos: Mike Brooks Had A Great Time On Power Tour And Shared All Kinds Of Photos From His Trip!