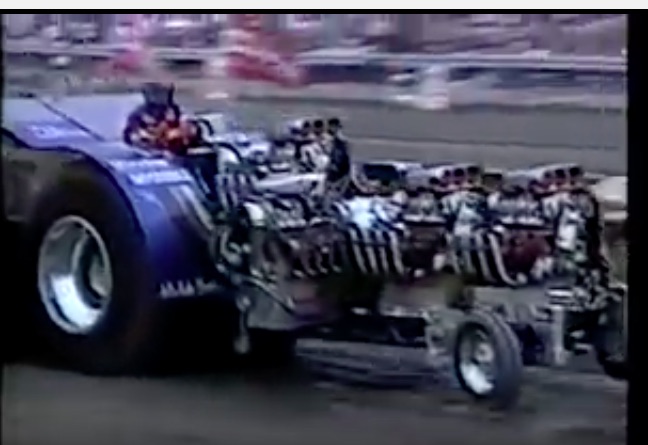 Three aircraft engines, six Rodeck big blocks, five Chrysler hemis, a pair of helicopter turbines, and a partridge in a pear tree. That’s a short look at just a few of the power combos being employed in this video which was made in 1986. Shot at the Bowling Green, Ohio NTPA national pulling championships, we’re focused solely on the big guns. These are the 9,000lb modified tractors and they are all but unlimited in what they can do for power. As many engines of whatever variety you can find are not only encouraged but mandatory.

Of note in this video. You’ll see Gardner Stone driving the famed “General” tractor. He’s the guy with the multiple boosted Allison airplane engines. Stone hails from Vermont and has also risen to notable status in the drag racing world driving a very serious Cobra Jet Mustang. The famed Banter Brothers are featured here as well. Do they make the pull off at the end? That’s what you’ll have to figure out by watching! Lots of the sport’s notable heroes from the 1980s are featured in the video as part of the sport’s most incredible class.

Depending on how you look at it, a fuel dragster is either tame or completely nutty as compared to these guys. It is tame if you like the look of six engines hanging off the front of a tractor and it is nutty if you consider that it is making equivalent to these tractors with a single engine that only displaces 500ci. We think it is more than OK to love them both (spoiler alert, we do).

This is a nicely produced video with some basic commentary and professional level editing. It is not something that a drunken shake fan shot from the stands or something. We think you will dig this look into the highest reaches of pulling more than 30 years ago. Big power, baby!

One thought on “Vintage Viciousness: This 1986 Video From The Bowling Green National Pulling Championships Features The Huge 9,000lb Modified Class”