Cool, Or Weird? What Do You Think Of This 1979 Ford Raptor? 590 Horsepower, And All The Raptor Goodness In An Old Body 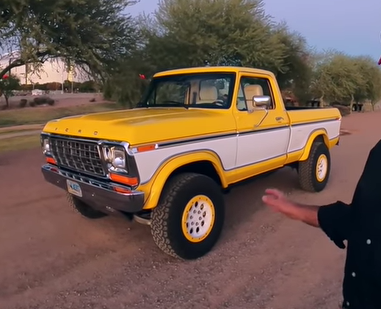 There have been so many attempts to put old bodies on newer cars and trucks over the years, and sometimes they work awesome and sometimes they are an utter failure. I remember seeing a Camaro at the SEMA Show a few years ago that had me and Lohnes puking in our mouths. There was nothing good about it, and yet the guy was there with a booth trying to sell kits that I can’t even describe without feeling nauseous. With that said, I can tell you that there have been a few older vehicles with all the new stuff under them that have come from Chevrolet and Ford at the SEMA show as well. And I have seen a few guys make it work in their own home or custom shops. But it’s hard to do!

And often it is the stuff people don’t think about that make it not work. Dashes for example. New car and truck dashes are way bigger than older cars and trucks, so that makes them tough to fit sometimes. I remember seeing one where the driving position was so bad because the dash was at least 8 inches deeper than the original to the car. It made it so uncomfortable and weird to sit in, and just didn’t look right when you opened the doors. But there are things you can do to fix that, or to massage it, so that things do fit right.

This 1979 Ford Raptor, which is combining a late model Raptor with a super clean Dent Side Ford, has a lot going on to make it look right. But have they pulled it off? You tell us. The fabrication and execution are very well done and I can imagine they have real time and money in this project. There is no way this was an easy one to do.

Gen 5 Or Gen 6? Which Junkyard Big Block Should You Be Grabbing From Your Local Salvage Yard? Boosted Bikes: Turbocharged and Supercharged Motorcycles Are Cool - Some Factory and Some Hot Rods!

3 thoughts on “Cool, Or Weird? What Do You Think Of This 1979 Ford Raptor? 590 Horsepower, And All The Raptor Goodness In An Old Body”