Morris Minors Are Cool, But This One Is Lifted, 4-Wheel Drive, CARBON FIBER And A Serious Bad Ass Compared To Stock 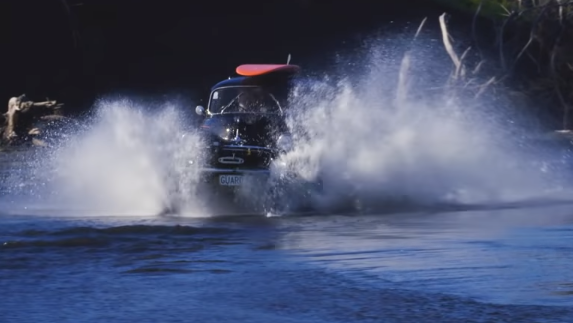 My dad was 5 or something when my Grandpa Reynolds let him drive the car for the firs time. It was a Morris Minor, and it didn’t last long. At the bottom of their street, unable to reach the pedals well enough to stop, they ran into a pole or a tree. I can’t remember which. So every time I ever see one, it reminds me of that story, plus they are just cool little cars. Sure they made no power and were tiny, but that’s why they are cool. They were built for a time and place where a fast car wouldn’t really get you there any quicker, and where bigger would have made it way harder to get around all the little streets and roads of Great Britain. This one is not that. Well, not all that anyway.

As you can imagine, this is NOT a Morris Minor underneath, but rather a Suzuki Vitara. Also known as a Suzuki Sidekick, or Geo Tracker, in the United States they are most often used to provide donor engines for guys building Suzuki Samurai’s into crawlers. But there isn’t anything wrong with these little machines, who’s light weight and good power make them reliable and capable. But what possesses someone to throw a Morris Minor body on one? Watch the video and you’ll find out, but know that there is a lot more going on with this little Morris than you might think.

Yes it is a “woody” by the looks of it, but that wood is strategically placed on Carbon Fiber body sides and roof panels. So the front half is Morris and the back half is all custom. This thing is awesome. It’s got a roll bar in it, two sets of wheels and tires so that in daily driver mode it runs on All-Terrains and when the rough stuff is planned the Mud Terrains come out. It’s even got a winch and all the other required recovery gear. This thing actually does go wheeling!

It is very well done, looks like a restored car in a lot of ways, and yet is about as custom as one could get. We approve whole heartedly!

One thought on “Morris Minors Are Cool, But This One Is Lifted, 4-Wheel Drive, CARBON FIBER And A Serious Bad Ass Compared To Stock”