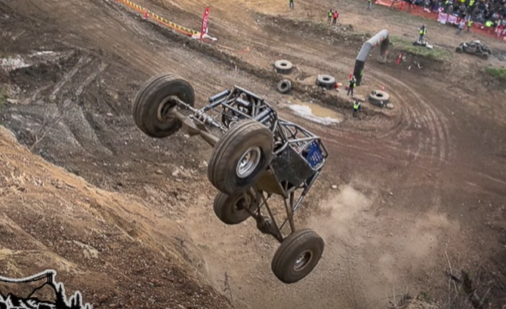 Tim Cameron is a badass when it comes to two things. One, building badass rock bouncing rigs, and two, driving them flat out up some of the most insane hills in the country. If you haven’t seen rock bouncing before then buckle up because the highlight video below is going to excite you. These racers throw themselves and their rides up hills and over rocks at speeds like you can’t believe. It’s some of the most violent high speed action you’ll see, and yet sometimes these rides fly through the air as smooth as a ballerina, so you just never know. In 2021 Tim Cameron was the man to beat, which won’t surprise anyone who’s seen him drive before. The rigs that come out of his shop are as capable as anything that has ever hit the mountain and they have huge power and sound like a million bucks when flying up the mountainside.

Cameron has built tube chassis rigs with big inch big block power, a Whipple Charged LS454, and more. They are usually power glide equipped and feature big solid axles at both ends. He has built himself an IFS rig though too. They have tons of suspension travel, and the ability to accelerate as quick as a drag car. Watch and you’ll see what we mean.

OPGI NEWYEAR22 Means Savings Of Up To 40% on Sheet Metal, Resto, and High-Po Parts! Dyno Video: This Little Holden 308 Is A Stock Appearing Screamer And We Dig It.