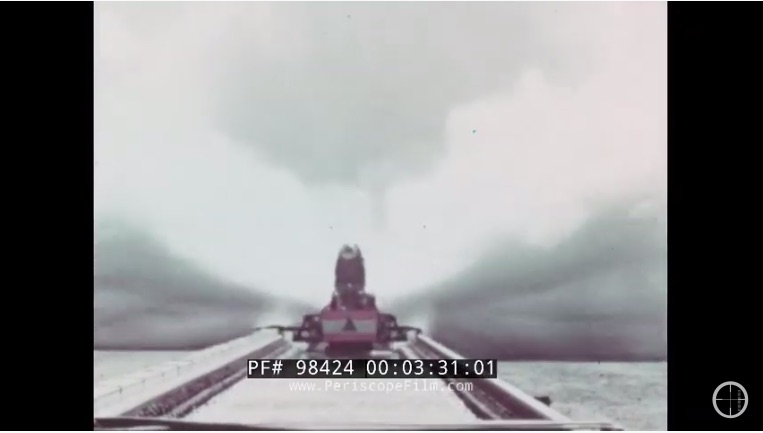 This is some wild mechanical history. You are going to watch “Space Age Railroad” which is the historic story of the rocket sled track at Holloman Air Force Base in New Mexico. Started as a 3500ft rocket sled course, by the time this film was made in the 1970s, it was already 10x that length. The film is narrated by a guy who sounds like a Disney villain and Dr John Stapp the man who became so famous for riding rocket sleds on the tracks to test the effects of wind, acceleration, and deceleration on the human body. He had massive, massive balls.

This facility is still being used. In fact, we ran a video showing a 6,500mph pass down the rails recently. Back when this was made, such numbers were still science fiction but this place helped to develop airplanes, rockets, and continues to be very important in the development of rockets and weapons for the military.

At this point in history, 100 different vehicles were available for the use of engineers. Tiny mono-rail machines, massive dual track sleds, they had something for everyone. Not every test at the place was designed to set a record for massive speed. Some were far more subtle than that.

Holloman opened in 1942 and it was basically located on the lunar surface. Even today in 2019 the place is still in nowheresville. That’s where all the good stuff happens, right?

By the time this film was made the facility was able to monitor some 100 data channels. How many times has that doubled over in the last 50 years? Loads.

Hilarious GM Promotional Video From 1966 - How Chevy Bagged On The Red Hot Mustang With Corvairs, Novas, and Chevelles LSFest 2021 Photos: More Cars, Trucks, Boats, Customs, And Who Knows What Else At LSFest In Bowling Green.

One thought on “Space Age Railroad: The Story Of The Rocket Sled Track At Holloman Air Force Base – Amazing History!”