This 1979 Ford Dent Side F-350 Got An Awesome Restomod Rebuild That We Totally Approve Of. Watch The Build Recap Here 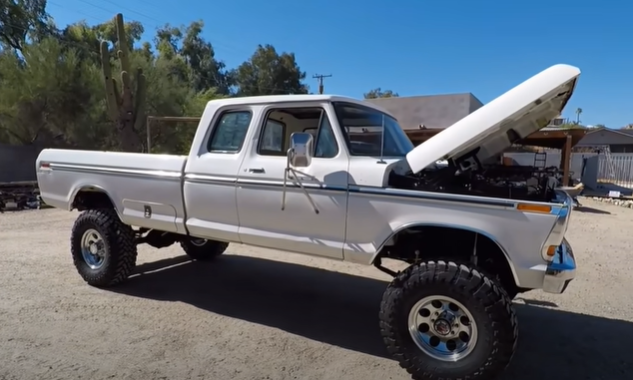 My Uncle Jerry had a Supercab Ford when I was a kid, and although we were diehard Chevrolet folks on our side of the family, there was still something cool about his truck. I remember going to the drive-in movies and sitting in the back seat watching Battle Star Galactica. His was yellow, and two wheel drive, but this one reminds me of it. This one here looks like it started out as a pretty solid old truck, but Austin Coulson made it into something special. He spent time fixing a couple spots on the body that needed attention, but without painting the whole truck, and redid everything else on it. I’m talking everything.

It got a lift, wheels and tires, rear disc brakes, Vintage Air, a Holley EFI Sniper kit, all new cooling system, new interior, electronics, and more. And Austin did it all himself. When the original 400M was found to have too much wear to do a garage rebuild on, he grabbed a 460 from the wrecking yard and rebuilt it in the garage after having the heads freshened up. When the trans needed a rebuild, you guessed it, he did it. The interior had he and the wife working feverishly to make it good. And it’s real good. This is not a sort of put together truck, this one is done right and anyone would be proud to have it in their garage. No doubt.

I love watching builds over time, because they are inspiring for those of us that have lots of projects in progress. But I also like seeing the time lapse videos of them going together because it shows progress in a hurry. Now I want to go back and watch every episode of the rebuild on this one, just because the work he did and the way it ended up really turned out good. Check out the video and then go back and watch the entire build episode by episode.

Here We Go Again: The Bloodhound LSR Project Is Up For Sale Once More - Proven To 628mph So Far This Custom Squarebody Silverado C10 Is Cruiser Greatness And Could Be Yours. It's Ready To Road Trip Now!

One thought on “This 1979 Ford Dent Side F-350 Got An Awesome Restomod Rebuild That We Totally Approve Of. Watch The Build Recap Here”