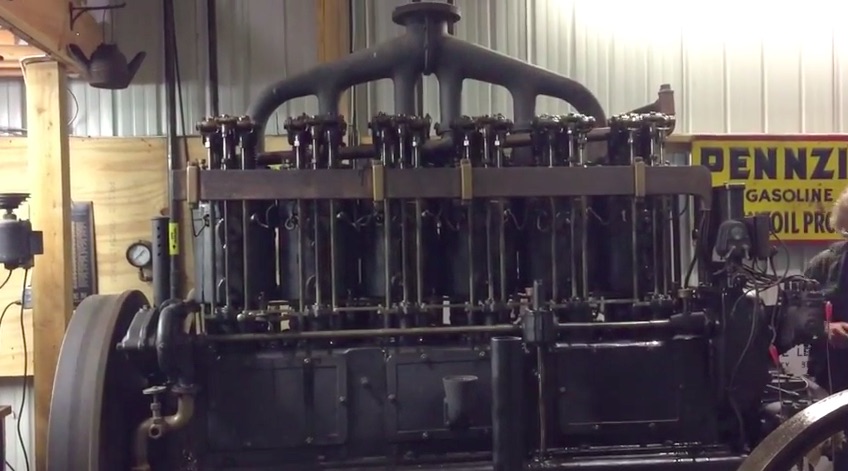 There’s just something about massive old engines that you have to love. In this case we’re looking at a Hall-Scott rail car engine that likely dates from around 1910 or thereabouts. Before most rail cars were electrified they actually used big engines like this to trundle around on their routes. We’re talking about the rail cars that would have been running short routes in a city or something of that nature, not full blown locomotives.

This six cylinder engine is physically huge but unfortunately we have not been able to dig any specs up about it. We do know that it runs on gasoline and that it has overhead valves but after that, your guess is as good as ours. While the horsepower number would likely be laughable, the torque that this baby produces has to be industrial strength.

The Hall-Scott company was very well respected and they built scads of engines. Lots of them went into fire trucks and other equipment. Known as everlastingly durable and reliable pieces, the company went until 1958 when the sold their engine division to the Hercules company and the name quietly disappeared from the market. A run of nearly 50 years in the most aggressively innovating period in internal combustion history is pretty damned good.

Hundreds and hundreds of other companies went by the wayside while Hall-Scott trooped on, building the huge beasts of burden that kept many vital systems and operations moving along (however slowly) in America.

Do You Know How To Decode GM Body Designations? OPGI Has It Handled For You! Dyno Music: Watch A 378ci Naturally Aspirated Cleveland Ford Crank Out 780+ HP At 8,000+ RPM

One thought on “Big Torque: Watch This Massive, Old Hall-Scott Rail Car Engine Fire Up And Clack Away”