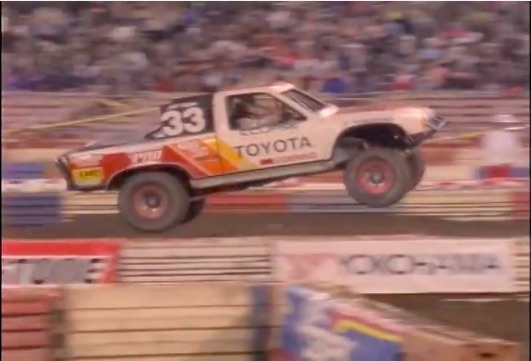 I don’t want to know how many quarters I dumped into an “Ivan ‘Ironman’ Stewart’s Super Off Road” arcade game when I was a kid…the figures might make me sick. Nothing got me worked up into a fervor faster than trying to whip a pixelated Toyota race truck around a course, just to have my non-driving little brother somehow shove me into a wall and win. Driving off-road in the 8-bit world, I sucked. Ivan “Ironman” Stewart’s driving does not suck. The guy’s 1990 driving season was the lesson to each and every off-road racer out there: just freaking win everything. And if you can’t win, hope that your teammate can drive just as well. Stewart and Jeff Huber were the targets to beat for Mickey Thompson races, SCORE and HDRA events for the whole year. If you were into off-road racing, you knew the Toyota trucks well. The guys ran against stiff competition, but in the end. when it mattered, the top post on the podium saw one of two guys wearing white with red trim holding a trophy. From the treacherous miles running Baja to the arena battle inside of Seattle’s Kingdome, if it said Toyota on it, bet on it.

That's Not Supposed To Do That: This 13-second Ford Escort GT Is A Surprise For Anyone...Who Doesn't See That Huge Intercooler! Hot-Rodding A Desk Engine: Turning A 16-Cylinder Sterling Engine Into An Electric Turbine!