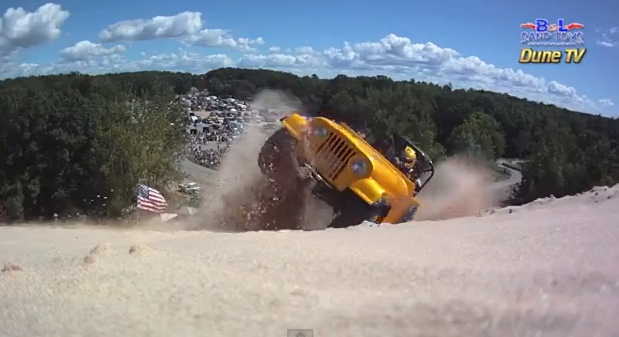 We’ve had Ben Dozeman’s crazy “Bad Company” Jeep on the pages of BangShift before. This is the same machine we showed you video of pulling power wheelies at will in the Silver Lake sand dunes. This time the Jeep is back but instead of cheating the laws of physics with wheelies in the dunes, it is cheating certain doom on a sand hill climb run gone bad.

Dozeman launches off and begins to ascend the hill at a very high rate of speed. The truck, as usual is carrying the front tires and being its crazy self. Things go wrong in a hurry when the wheelie bar bends and the Jeep launches skyward on the steepest, most nearly vertical portion of the hill. Porpoising up the hill, the truck eventually lands on its side and if it rolled one way, it would have headed down the hill in a death spiral, tearing itself to shreds on the way down. Instead it rolled the other way, onto the wheels and Dozeman hammered it, launching the Jeep over the crest of the huge dune.

This Jeep is totally awesome and Ben Dozeman is our new hero! He gets the unintentional stunt driver of the year award for this run!

Press play below to see the Bad Company Jeep make a crazy and near catastrophic hill climb run!

Video: Harley Plus Nitrous = Human Torch! Big Cat Prowling: This 9.50-capable 1971 Mercury Cougar Is What Luxury Sport Should Look Like