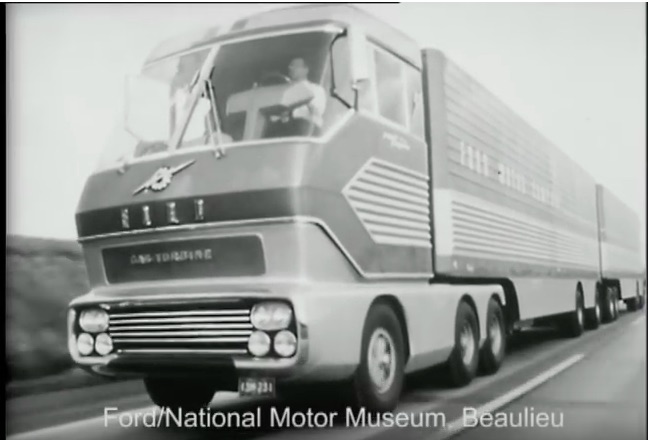 Over the years we have posted lots about Chrysler’s turbine program and talked about how it was the most robust automotive turbine program that any of the OEM companies had embarked on. While I still hold that to be true, Ford’s turbine efforts were not all that far behind Chrysler’s. The major difference was that Chrysler was more public with their desires and their products than Ford was. Ford’s most public foray into the world of turbine power was their famed Big Red truck. We have written about this thing in the past but we have not found video until today. This is radical stuff!

The truck was huge by the standards of the day and completely futuristic. Power was derived from a gas burning turbine and as you can see, it was enough power to move this behemoth down the road and get it to the transcontinental list of appearances Ford had lined up for it. The cab was funny by today’s standards but for the 1960s it was Jetsons stuff. An oven to cook a Hungry Man dinner? A floating gauge console? A ladder that deployed and retracted automatically? A beverage dispenser?! What kind of sorcery was this? It was the kind that got heinous fuel economy and basically proved to Ford that they were going nowhere with this whole thing.

The Big Red truck is awesome and is rumored to still exist. We have no seen “modern” photos of it in a long time so we have our doubts but we hope that the big rig lives somewhere and is intact.

Beech Ridge Spectator Drags: Semi-Civilized Lap Racing For The Delinquents Of Maine! Video From The 1976 Hulman Classic Captures Some Of The Coolest Old Sprint Car Action