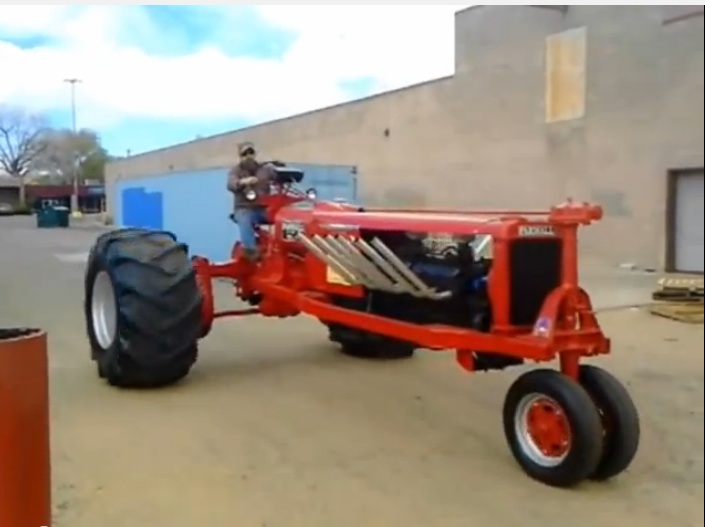 The 702ci GMC V12 was a torque making, fuel chugging monster that certainly had its place in history and the fact that there are still a bunch of them floating around today certain speaks to their toughness. They were not hot rod engine but huge beasts of burden that had applications in heavy trucks, fire engines, generators, huge pumps, and other stationary work. They are cool to look at and while some people will say that they are two V6 engines joined up, that really isn’t the case. There’s a steel crank that weighs about 200lbs anchoring the whole thing and with massively heavy pistons and rods, they do not rev in factory form. Want to pull the heads? Just loosen all 56 bolts! Roughly 5,000 of these engines were produced by General Motors 50 some years ago. All that said, the big guy certainly looks fantastic in this tractor!

We have absolutely no idea what the application for this tractor is. It may be a puller but there’s no protective cage for the driver (or even a hoop) there’s no wheelie stands coming down from the axle to prevent the thing from levering over backwards, and those humongo tires look fantastic but seem more fit for the monster truck world than that of Farmalls, John Deeres, and Case tractors. We really don’t care if it was built to do a specific thing because it is so visually crazy. The super wide rear axle is pretty cool looking as are the huge gear reduction hubs on the end of said axle. The low compression V12 sounds pretty mean through all of those zoomies when the driver whacks the throttle a couple of times as well.

Lastly, the precision backing job to get this big guy into the shop at the end of the video needs to be mentioned. There is ZERO margin for error, here and the guy sticks it home with virtually no trouble. What do you think? Cool overkill? Useless? Weird? Watch and tell us!

Watch the Wildest Heavy Haul Fail We've Ever Seen - No Brakes And A Massive Mess Inside The Shop: This Video Featuring Kelly Racing In Australia Is An Amazing Look At Supercar Competition