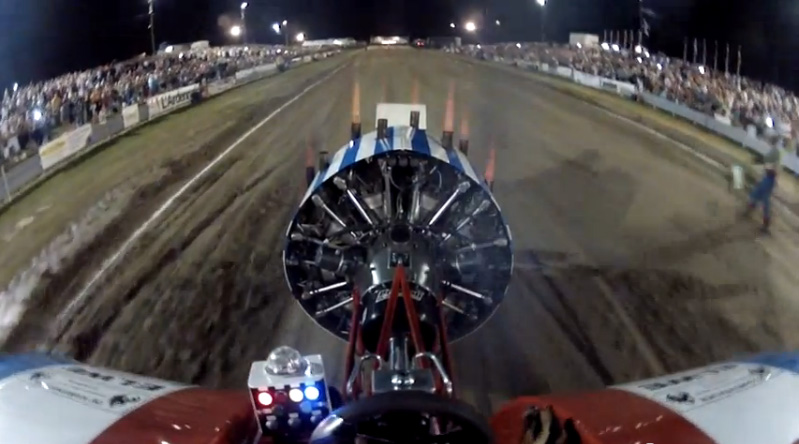 Giant radial engines, the likes of which powered military and commercial propellor planes during and after WWII are incredible pieces. They sound like nothing else in the world, make our digit horsepower, and when you think about how stuff is actually working inside of them, it’ll really blow you mind. The fact that the engines made as much power as they did, even at altitude is a testament to their burly history. Over in Europe where the rules in tractor pulling seem a little different than ours, there are a few competitive tractors running radials instead of multiple hemi engines, or tank engines, or giant diesels.

As you’ll see in this video the engine is hanging pretty far our on the nose of the tractor and because we have the driver’s eye perspective from the camera placement we can see that the arrangement for the driveline is essentially the huge radial with a clutch can on the back of it like you’d find on a dragster and a driveshaft coming right from the back of the can to the rear end. The coolest thing is to watch all of the exhaust pipes when the driver puts the throttle to the wood. There are cones of flame coming out of every pipe and the engine looks like some sort of satanic birthday cake.

Now, one thing we need clarification on is the job of the crew guy. He clearly engages and disengages the reverser, allowing the tractor to backup but what exactly does he do out in front of the engine? What is he turning or or activating up there? If you know, spill the beans because we’d love to hear from you. Now, onto the video!

Thanks for the tip Rich Hein!

PRESS PLAY BELOW TO SEE A RADIAL TIRE TRACTOR SPIT FIRE AND RUN THE SLED OUT THE BACK DOOR!

Listen Up: Greg Anderson and Ron Capps On The NHRA Insider Podcast - A Pair Of Hot Shoes! Dare To Be Different, Circa 1990: This 1987 Saab 900 Pro Street Build Is Truly Wild!