Leverage And Torque Rule: Watch This Log Skidder Operator Save Another Machine From A Frozen Lake In Maine 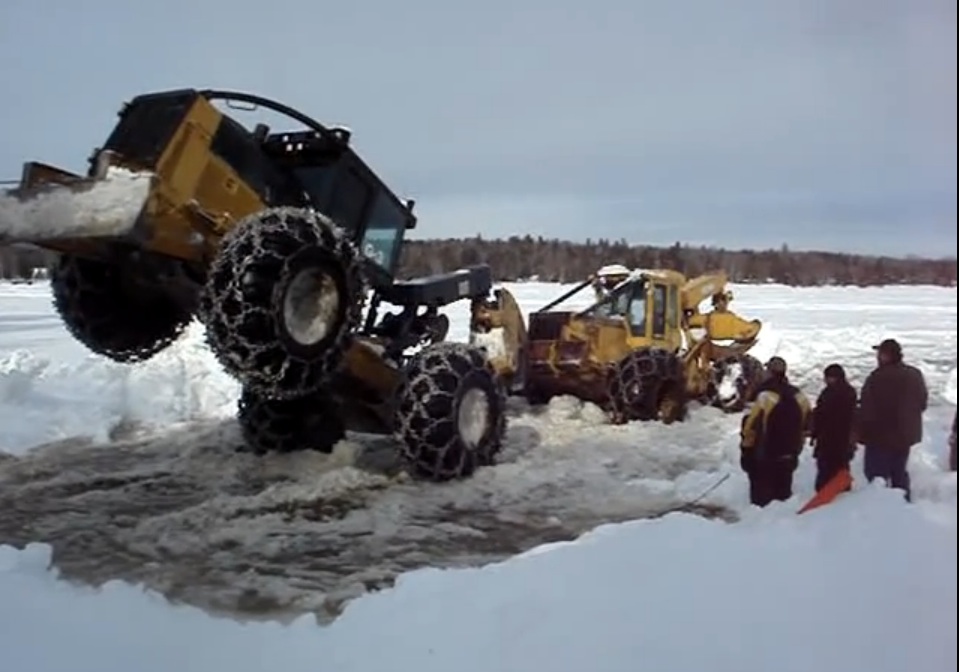 We have all had one of those “good idea at the time” situations turn bad on us in a hurry, right? Thankfully for me anyway it has not involved a vehicle that weighs 15 tons and a frozen lake. According to the information under this video on YouTube, the stuck log skidder was dragging an ice fishing shack out onto the lake when it broke partially through the ice and became stranded. The footage you will see below is from the moment that the stranded skidder was dragged to safety. What you aren’t going to see is the other full day of work that was put in to get to this point. Yes, it took two days to get the machine out. We have no idea how much that cost but we’re guessing that it was more than $50.00. Just taking a shot there.

Here’s why this operator is the man. The guy clearly went into this job with a program and it even kind of fooled the guys standing there watching. As he gives the Caterpillar skidder that he’s driving the oats, it climbs up on the back tires and the guy taping says, “So much for that idea,” but the reality is, the guy was doing it right. Watch closely and you will see him extend the arm on the back of the machine, making the leverage his wheelstanding skidder is applying to the back of the truck machine more forceful and allowing him to bust it free and drag it to safety.

Note that the stuck machine, even when being pulls skids along with the tires locked up. That is because (again according to the video comments and description) everything in the driveline was frozen completely solid. Once they thawed it out and checked it over, the guys fired it up and reports are that the machine is back in the forest, dragging felled trees to loading areas. Grunt force trauma right here!

2 thoughts on “Leverage And Torque Rule: Watch This Log Skidder Operator Save Another Machine From A Frozen Lake In Maine”