Video: The Massive M25 Dragon Wagon Was A Tank Recovery Truck And Tank Hauler In WWII – A Beast! 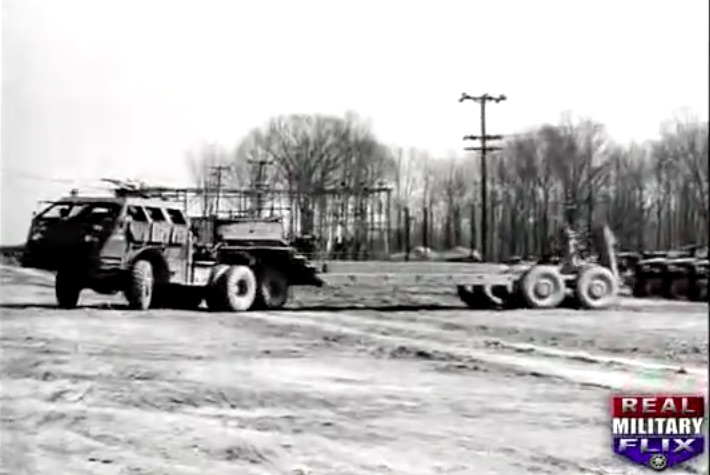 The amazing thing about WWII era military vehicles is that just when you think you have seen them all, you find another one that may be cooler than the rest. In this case we’re talking about the M25 (later the M26) six wheel drive truck that was affectionately known as the Dragon Wagon. The M25 Dragon Wagon was a tank hauler, designed to pull Shermans down the road on the M15 trailer that they were designed to ride on. When in the field, the truck was armed with a .50 machine gun and had armor plating to cover the windows and engine so it could wade into “hot” areas and pull out stick or otherwise busted tanks for repairs.

Perhaps the most cool part of the whole truck is the engine that it used. A Hall-Scott 440 was the chosen power plant. The 440 designation really doesn’t have anything to do with the physical specs of the engine. We’re talking about an inline six that displaced 1,090ci! This monster used a 5.75″ bore and a 7″ stroke. It made about 240hp at 2,000 RPM and something like 810 lb/ft of torque at 1,800 RPM. Long story short, it was one of the largest, if not the largest gasoline engine ever installed in a military truck.

Equipped with twin 60-ton winches and a third 35-ton winch, this was a truck that was designed to pull or forcibly drag anything it needed to at any time. The six wheel drive allowed it to claw itself into and out of virtually any terrain as well. Weighing about 50,000lbs empty, the truck is about 25ft long and 11.5 feet tall. Introduced late in the war, the truck had a 10 year life span before being replaced in 1955.

Oh, about that armor plating. You are talking about 3/4-in steel basically the whole way around. Not built for speed or beauty, it was a beast of burden that filled its role perfectly.

Vice Grip Garage Competes In The Indy 800! - Wrecked at 3rd | Behind the Scenes | Independence Damage Update 12 Angry Cylinders: This Video Tells The Story, The History, and the Legend Of The Ferrari 250 Series From End to End

One thought on “Video: The Massive M25 Dragon Wagon Was A Tank Recovery Truck And Tank Hauler In WWII – A Beast!”