Playing In The Snow: Diesel Trucks Dance Together In A Snowy Parking Lot

Dec 20, 2014Bryan McTaggartBangShift XL, XL VideosComments Off on Playing In The Snow: Diesel Trucks Dance Together In A Snowy Parking Lot 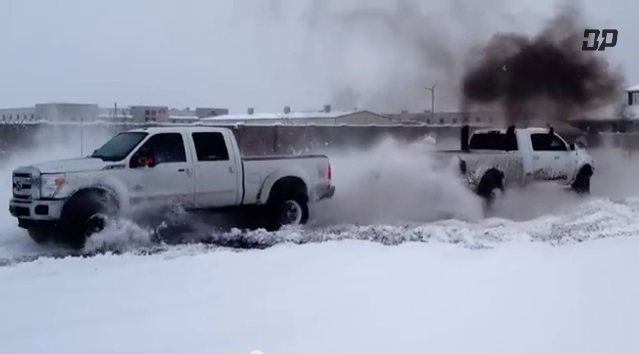 Donuts in the snow…is there anything better in the winter? It doesn’t take effort, or even a lot of power to look like a pro when enough of the white stuff is on the ground. However, these two high-horsepower diesel fanatics decided that if one truck spinning around in the snow was good, then two trucks, linked together, twirling in the snow would be a sight too pretty to ignore, and they just might be right. There is a claimed 1200 horsepower between the 2010 Dodge and the 2011 Ford, so they seem pretty evenly matched. Once the two rigs are chained together it’s all about smoke and slush as they spin giant eight-wheeled donuts. Not wanting to feel left out, a Duramax GMC joins in the fun and goes for a spin with the Dodge, but the dance is cut short when the chain snaps.

All that’s missing is some good Fantasia-like music as these two big girls dance in the parking lot on a winter’s day. Click play below for all of the diesel-powered goodness:

Rough Start: The Fastest (And Cheapest!) Way Into The Friendly Skies! Six Minutes Of Non-Stop Drag Race Wheelstands From Urban Hillbilly Video - This One Is Hot Off The Presses