Free Truck? We’re All About That! Here’s The Story Behind The Rescue Of This Dentside Ford! 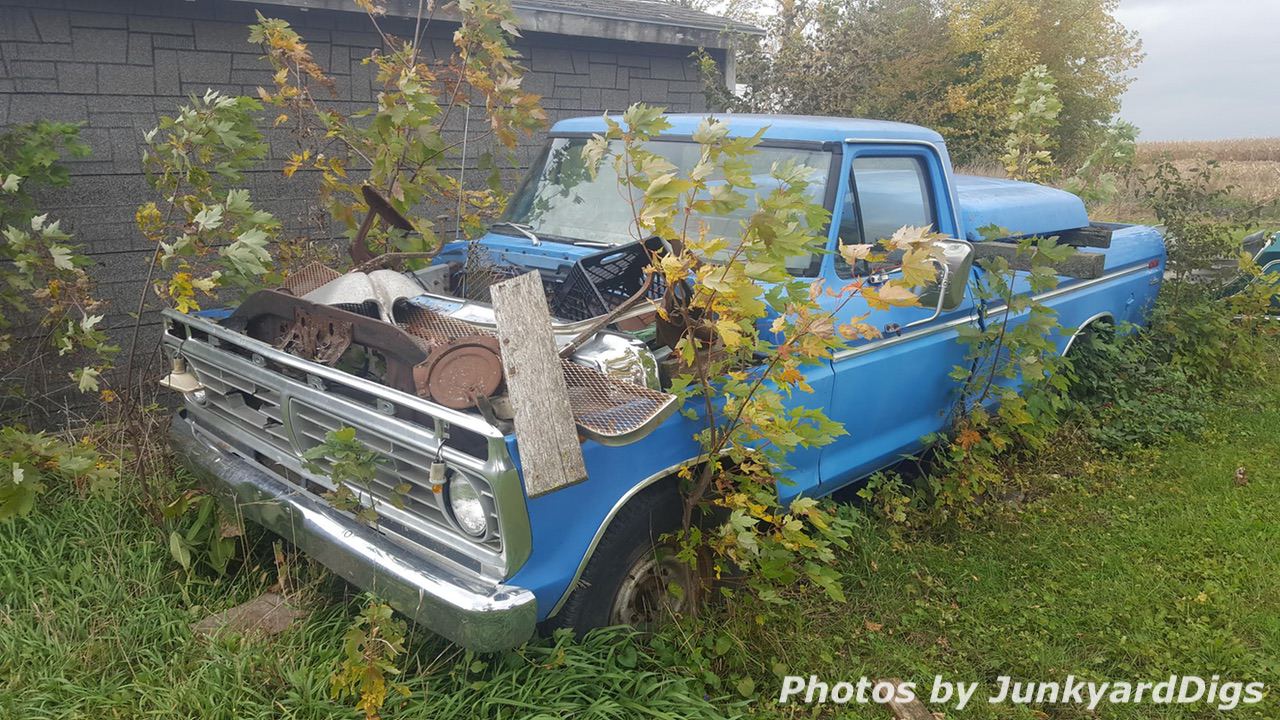 (Words and Photos: Kevin Brown)  We all love a good deal, especially when it comes to cars and car parts, and especially when those cars or parts are free! I was lucky enough to happen across one such a deal a few years back that, actually, makes a pretty good story! So without further ado, here’s how I found my free ‘75 F250!

To set the feel for this story, I have to back up for a second and tell you a bit about the area I live in. I grew up in north-central Iowa, which if you’re familiar with, is potentially the most boring area ever if you’re a gear-head. I live an hour from the nearest O’Reilly’s, and 2.5 hours from the nearest drag strip. Iowa’s winters are hell on cars, rusting most until the frames split and destroy anything left that hadn’t already fallen off from corrosion. If you are lucky enough to happen across a solid classic car, there’s a high chance it’s either a four door passenger car with a base model driveline, or a 3/4 ton truck. Vehicles here are influenced by the heavy farming in the area, and were either a workhorse or a family hauler. Very few toys were present in early years. Besides this, being a hot rodder is an oddity in my home town, and I may still be the only young one in my area. Now, on with the story!

One particularly monotonous day at college, I was cruising through the classifieds on Facebook when I came across a rare Suzuki GT185 that had been abandoned in a barn for years. Being a fan of old two stroke street bikes, I raced home that Friday evening, grabbed a buddy, and set out with cash in hand to pick up the bike. Since we had already scored one sweet barn find, we figured why not test our luck and try to find another? We turned down some back roads we were both unfamiliar with, grabbed another gear, and kept hunting. 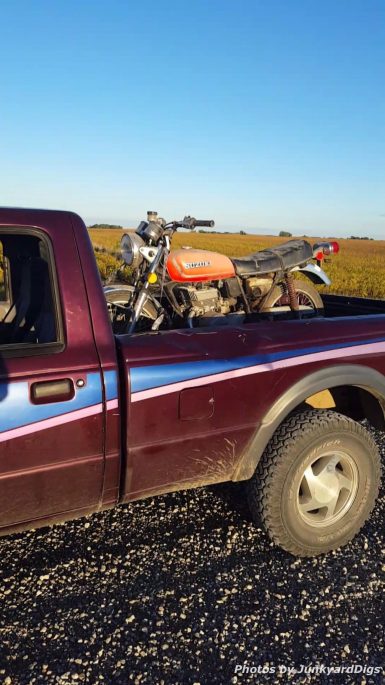 A couple hours later we were easily a good 20 miles south of home in the middle of who knows where, when I began to smell something getting hot. We had stopped at maybe 10 farmsteads, all of which had no old cars or bikes anywhere on them. I pulled to the side of the road and popped the hood to figure out why the truck was smoking. A couple minutes of hunting led me to find the front left caliper was sticking and starting to get plenty hot. Thankfully it had rained pretty good two days prior so we started to make our way home, stopping every time the brakes began to drag, at which point we would find a puddle and dump rain water on the caliper, thusly cooling the boiling brake fluid, and allowing us to continue on for another mile. 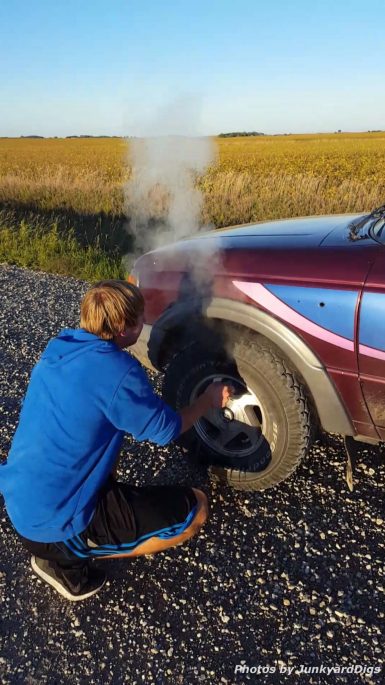 Being that we were essentially in limp mode, I chose an alternate route home that lead through
a tiny town called Galt, which had a population of about… maybe, seven? A solid baseball toss would go
from one end of the town to the other. Once again the Ranger’s caliper start to drag and required us to
pull over to find more rain water. That was when I saw it. Tucked up against a dilapidated shed was what
appeared to be a mid-70s F250. Usually an old truck isn’t a special occurrence for my area, but this one
was different. This one was ridiculously solid for an Iowan truck. I took a couple quick pictures to show
my dad then continued limping the Ranger towards home. 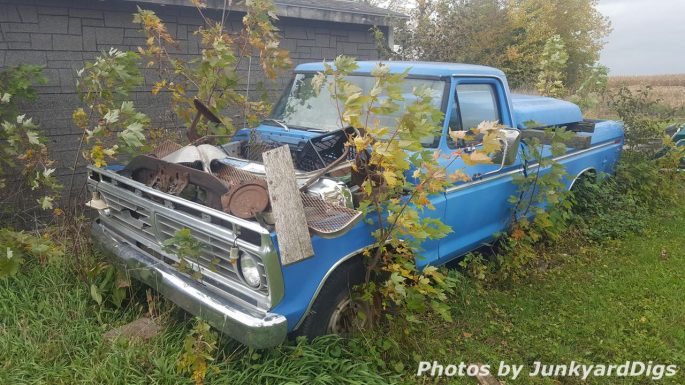 About a month later I headed back to Galt to take a second look at the truck. This time one of the neighbors was working outside. I pulled in and walked up to the friendly man introducing myself, and asked if he knew who had owned the Ford that was abandoned by the house next door. Sure enough he did and happily gave me the man’s name and number. I thanked him and walked back to the truck smiling. The name he had given me was a coworker of my dad’s, and a family friend for as long as I could remember. This was my “in”!

Soon enough I got in touch with John, the owner, and asked what he wanted for the truck. “What, that old blue one with no driveline?” he said, “You can have it!” DEAL! We hooked up the trailer and later brought home my first classic vehicle. And thus began my addiction for finding and saving classic trucks and cars! 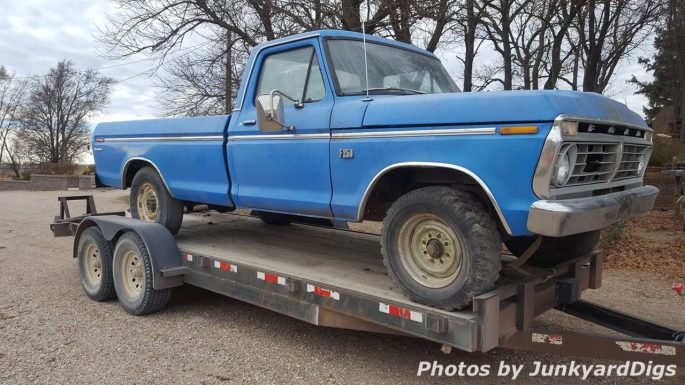 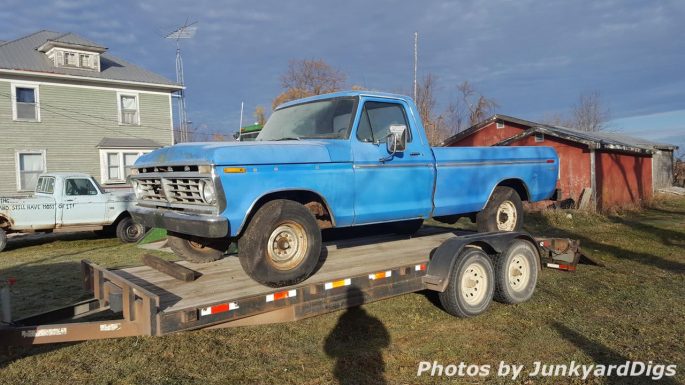 You can see more of Kevin’s handiwork on his YouTube channel, Junkyard Digs. -ed.

Holley Hot Rod Reunion 2018 Gallery: The Show Car Picks And A Tribute To A Legend One Last Hook: Here's Our Final Full Pull Of Photos From The 2018 NTPA Mule City 300

One thought on “Free Truck? We’re All About That! Here’s The Story Behind The Rescue Of This Dentside Ford!”