On Top Of The World: Here’s The Full 1957 Chevy Promotional Film Featuring Trucks On The Alcan Highway 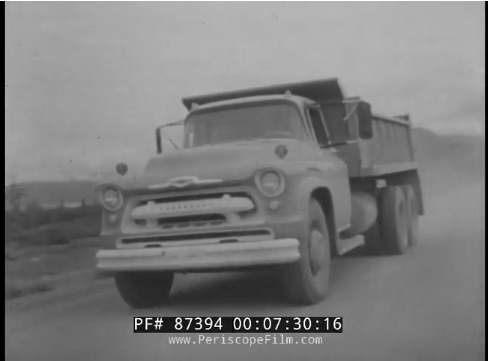 This is a fantastic film from the late 1950s that we think you’ll dig, especially if you enjoy the history of American trucks. Today, manufacturers put their rigs through a load of sometimes corny “tests” to show how tough they are. Back in the 1950s, companies actually did some crazy stuff with their trucks and filmed those antics for the same reasons they do today…sales. Back in 1957, Chevrolet pulled one of the great stunts of all time when they sent a fleet of trucks varying from standard pickups to huge semi-trucks from the proving ground in Michigan all the way up the Alcan Highway in Alaska…and back.

The coolest part of this movie is the fact that the big trucks were sent up the road with a load strapped to their back, at least some the time. The biggest truck hauled some huge pipes, there was a multi-axle dump truck that was loaded with what appears to be stone at least some of the time, and there were box trucks, panels, and other varieties as well. Six cylinder and eight cylinder engines were used along with manual and automatic transmissions. In fact, the dump truck used a slush box the whole time!

These trucks covered thousands and thousands of miles on rough roads and according to the propaganda film, seemed to handle ’em with no issues whatsoever. We know that this is basically a sales film for the ’57 trucks but we can’t help but enjoy every second of it. The scenery and the rigs are awesome.

Watch the full 1957 Chevy promotional film on the Alcan Highway –

BangShift Question Of The Day: What Was The 1970s Best/Worst Factory Special Paint Job Watching This Turn Of The Century 10hp Engine Start Up And Run Is Absolute Gearhead Magic