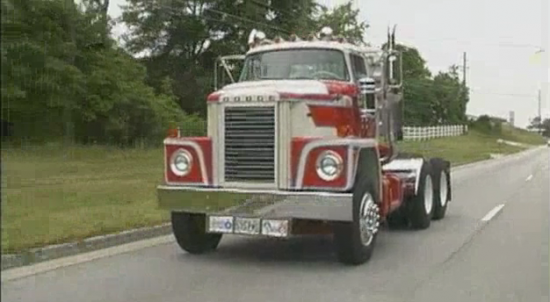 Not many people remember that Detroit’s Big Three were heavily involved with the Big Rig business in the 1970s. Dodge was in the mix along with Ford and Chevy/GMC. In some sense, they were out almost as quickly as they were in. Dodge was done producing big rigs by 1976. Few of them remain today becuase their production numbers were so minimal late in life. The other reason, of course is because large trucks get worked to death, parked and scrapped.

This video rules not because of exploitive gear bangin’ but more because we get to see and ride along with a rare truck that has been restored to better than new condition. The test subject is a 1973 Dodge 900 powered by a sweet sounding and perfectly running Detroit Diesel. You can hear the motor working all the time in the video and there is some good shiftin’ around the 1:30 mark!