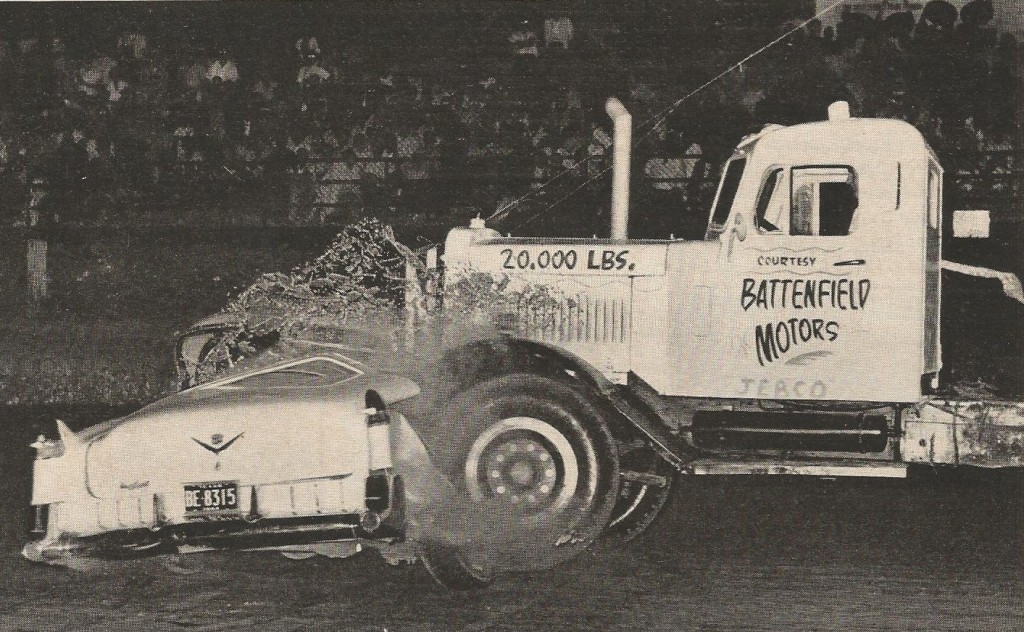 If you have been reading BangShift for any length of time, you know that I am obsessed with digging up these little nuggets of greatness that have been stored away in my memory banks and occasionally bubble to the surface. Remember a few years ago when a 1959 Chevy was crashed into a 2009 Chevy and the world recoiled in horror when the big old ‘Chevy folded up like a wet napkin made of jagged steel? Never mind that the test was chock full of bogus stuff and key in on that public reaction. It came from all corners, old cars are death traps! New cars are amazing! Yadda, yadda, yadda. The fact is, junk like that test has been happening for decades on end in order to advance someone’s agenda in one way or another. In 1964 a similar stunt was pulled, but this time it was different. There was a counter stunt that proved how inane and simply dumb the first event was. It involved a Connecticut Police Commissioner and a plucky car dealer from Texas who wasn’t going to let a crusading copper quash his car business.

In 1964, Connecticut’s top cop was a man by the name of Leo J Mulcahy and he devised a series of crash tests to prove once and for all that small cars were dangerous and posed some sort of hazard to their passengers and other drivers on the road. I can find no reason why he wanted to do this other than perhaps he was buddies with a Caddy or Lincoln dealer that was looking to move some more units. That literally may have been the case as Mulcahy went public with a statement to Time magazine that literally reads, “We want to create a buyer resistance to small cars and to arouse public awareness of the dangers of riding in small cars.” Wow, that’s some old school honesty right there!

The aptly named “Motor Vehicle Research Company” was the testing organization that did the crashing and bashing. As best we can tell their depth of scientific research on the cars post wreck was along the line of, “Woah! See how messed up the small car is and how the big car is OK?” The whole operation sounds like something out of a Mel Brooks movie. Hedley Lamar would have been elated at an event such as this.

According to research we have done into old newspaper clippings and stories about the event, it initially hit the papers in just the manner that Mulcahy wanted it to. Lots of reporters talking about decimated small cars, running photos of decimated small cars, and adhering to the weird party line that the esteemed Police Commish was trying to establish. Then….things changed.

Time and Newsweek reported on the event and they actually did reporting and talked to engineers and automotive experts who essentially told them that yes, the tests seems to have proved that the laws of physics were alive and well that day in CT, but simply wrecking cars into one another without any more consideration other than damage level was a pointless exercise. And while it was good to have some eggheads on the side of thinking people everywhere, the guy who would really blow this whole thing out of the water was a fairly obscure Rambler dealer in Texas.

As it turns out, where mangled small cars are shown and law enforcement officials are talking to the public about how dangerous they are, the small car selling business suffers or in theory it could. Jay Battenfield from Amarillo, Texas had read the stories and heard the reports from the Connecticut exercise and saw right through it for what it was…a gussied us farce. Deciding to fight farce with face (the best strategy in our opinion), Battenfield staged his own testing in front of some huge crowds.

Going along the same logic as the Connecticut testers, you remember, the pros at the “Motor Vehicle Research Company”, Jay Battenfield gathered a bunch of the largest cars anyone would find on the highways and byways of America and staged crashes between them and a….massive big rig truck. Genius! While the truck’s claimed 20,000lb weight seems a little shifty to us it was still a real deal big rig (complete with an actual driver, you can see him in there) doing the exact same bunk tests that were performed in Connecticut. As you can see in this photo, that massive Caddy is starting to flop like wet noodles as the weight of the big truck is coming to bear. Bet it looks a lot like a crunched up VW Beetle after being struck by a Chrysler New Yorker.

Those big barges must have been as unsafe as the small cars because the truck came out heaps better than they did, right Commish? We would have loved to have been in the office when word got back to Mulcahy about Battenfield’s event. He probably blew his stack. It was covered by lots of media and made the Connecticut look just as Battenfield had hoped, bush league.

We’re not sure what became of the Commissioner in Connecticut after the testing and through his life, but I do know that Battenfield was a very successful car dealer and later created one of the more famous “art cars” of all time called the Jewel Box. The car was built as a tribute and memory to his wife was who ironically killed when her car was swept up by a snow plow and essentially deposited under a big rig on the freeway one winter. She died on impact.

The photo below represents both a moment in time and one of the finest usages of actions speaking louder than words to prove someone is a horse’s ass ever. Man, I LOVE junk like this! 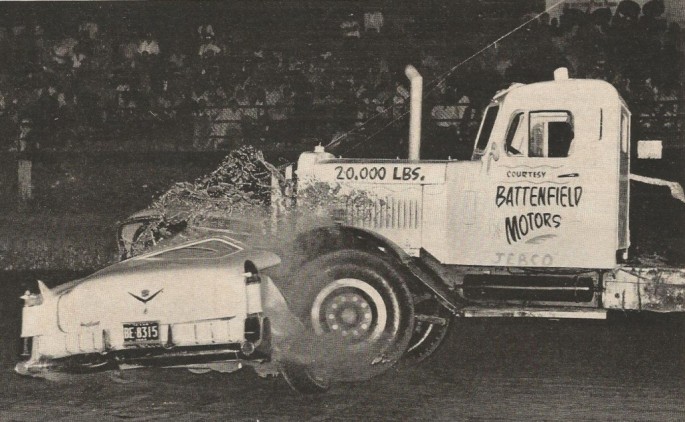 Ride Along In The Rear Of A Ladder Truck As A Tillerman Handles His Business Hand Painted Hot Rod Truck Doors: Pinstriping, Lettering & Silver Leaf