Thee Minutes Of Muck And Pain: Wild Video Of Dirt Bike Racers Wiping Out In The Same Mucky Pit Following A Jump – Hilarious and Painful Looking 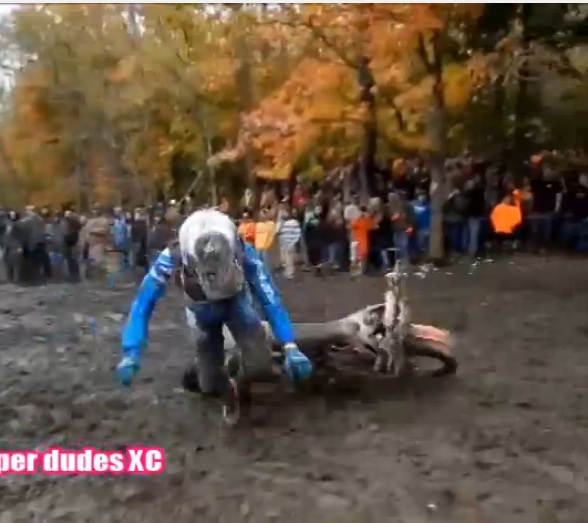 I admire people that race dirt bikes because in my limited experience on them, I barely had the skills to ride one in a wide circle let along fling off of jumps, slog through mud, and bash off rocks for fun. Well, it isn’t always fun as evidenced by this pretty hilarious video that was taken at a dirt bike race at an off road park of some sort. The best part of the video is that seemingly the entire crowd is huddled around one area of the course and that is obviously the spot where stuff goes down…this video is three minutes of stuff going down. That stuff is riders crashing hard, riders wiping out, and riders burying their junk so deeply in the mire it may still be there.

The tricky part about this course is that no matter how you approach it, failure is imminent. If you go slowly you will nose into a pit and get stuck. If you go fast, chances are you will botch the jump and get thrown from your mount. If you are lucky enough to stay on after landing the jump you will catch a mud rut and get launched over the handle bars. This video is literally three minutes of every possible way to leave the seat of the motorcycle. Some are gentle, some are violent, and all are completely hilarious. All but the one guy who actually seems to get run over a little bit. That moment sucks a little but the rest of it is comedy gold.

Mooneyes New Year’s Party Coverage: Our Photos From SoCal's First Car Show And Race Of The Year Keep Coming! Ride Along In The Rear Of A Ladder Truck As A Tillerman Handles His Business