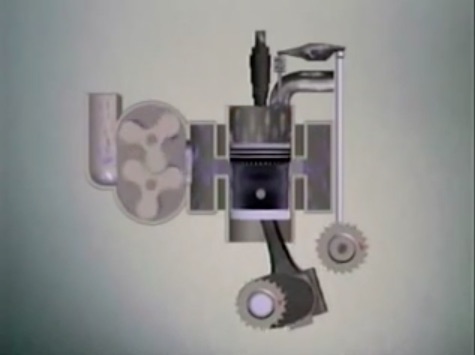 While the two stroke diesel engine is not as common as it once was we thought it would be cool to show you some neat animation that depicts just how these things work. There’s lots of confusion out there among people who are not really into diesels about how a two stroke operates so let this clear some of that up. The biggest thing is that people think that two strokes are supercharged and the ones which are turbocharged they believe that the engines are supercharged AND turbocharged.

This is not the case but it is easy to understand why. When hot rodders started mounting blowers from two stroke GMC diesel engines on their cars they became superchargers. Naturally when you see one you’d suspect that it is performing the same duty on whatever engine it happens to be bolted to. In this video you’ll get a super clear understanding of what the blower is doing and why the engine literally would not run without it.

The stern sounding British guy who narrates this one is kind of funny as well. You’ll see how the air gets into the cylinder (remember, there is no intake valve like in a traditional four stroke engine) and the general principles of how the whole system works. This is good education!

Truly Custom: Watch Don Groff Run His Custom Built Toyota 1JZ V12 Powered Open Wheel Car On The Dyno Ride Along For A Lap Down The Tiny (and not extravagantly lit) 330' Mountain Motor Dragway In Kentucky