Jan 08, 2022Brian LohnesBangShift XL, XL VideosComments Off on This Video Of A Bombardier Sidewalk Plow Pulling A Big Rig Out Of The Mud Is Totally Awesome 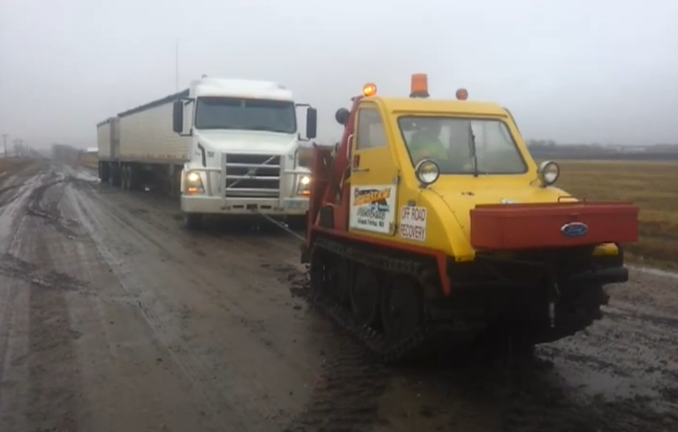 If you don’t live in a place where it snows, chances are that you’ve never heard of a Bombardier sidewalk plow and that’s a shame. These little tracked bastards have cleared the way for millions and millions of kids to walk to school, for old ladies to shuffle to the corner store, and for the mailman to make his appointed rounds during the snowy season. The look like little one man tanks with plow blades and they pretty much are. Known for their reliability and intrepid nature, these machines are still in use around the country, doing what they were designed to do and in some cases, like this one, stuff that no one ever dreamed of.

Bombardier tracked vehicles were made in a bunch of different sizes and not all of them were sidewalk plows. Some were designed to be used in the logging industry or in other woodland ventures and others were for industrial applications. The machine you are going to watch save this big rig started off as a plow and has been modified as an off road towing and recovery vehicle which is flipping genius. This one sounds like it has a six cylinder gas engine in it, which makes sense because the 300ci Ford was a mainstay in these bad boys.

With a ton of gear reduction and traction for days with its tank tracks, the little Bonbardier makes short work of pulling the rig out of the mud and back on the road. The truck is empty but it does have a pair of trailers attached to it, so we still think that it is a pretty impressive feat! The best part of the whole situation in our eyes is that this is a 1973 machine so the towing company guy probably bought it at a surplus auction for like zero money and it now makes him a mint doing off road or large tows like this. This isn’t a tractor…it is a cash machine!

Beware, if you watch this video you are going to slide down into the depths of YouTube Bombardier videos and get trapped there for hours. It is snowing like a son of a gun here at Eastern BS World HQ today so we’ll be down there with you. Come on in…the water is fine!

Grippo's Best Of 2021: Joe Grippo Gives Us His Year In Review After Sharing Great Photos In 2021 This Account of Dwight Eisenhower's 1919 Cross Country Trip Is Fantastic - Punishing Journey!