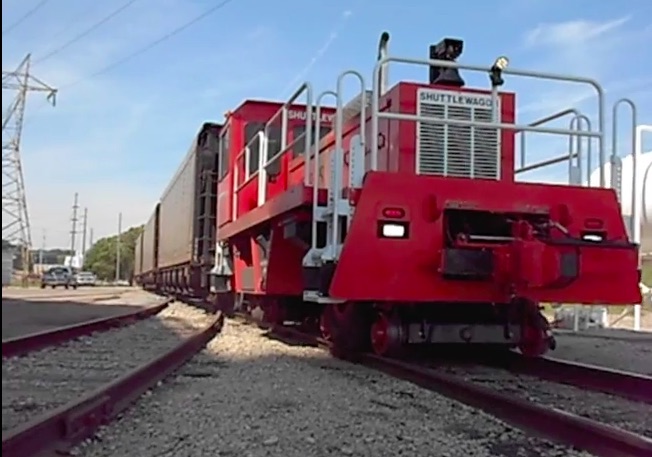 In the realm of stuff that we never knew existed, the Nordco Shuttlewagon is king. Working with the mundane title “rail car mover” what you see here is basically the most extreme version of a Hy-rail truck in the sense that this machine is designed to move as many as 40 rail cars at a time but it is also mobile enough to be used as a snow plow in a parking lot or other area. Powered by diesel engines that make 300hp, they literally look like an old school locomotive engine on wheels. How did we discover these awesome creations? My wife and I saw one being hauled on the back of a big truck on our way home from the Ohio Mile and I was immediately curious as to what it was that we saw. It took about three seconds of Google to find out lots more than I ever knew about the world of the Nordco Shuttlewagon.

There are a couple series of Shuttlewagons including an electric powered model. We’re more interested the diesel stuff so that’s where we’ll spend our time here today. As is our typical style we’ll go right to the biggest model we can find which is called the NVX8040. It weighs in at 100,000lbs and uses a Cummins engine for power. The transmission is actually a John Deere unit and has four speeds forward and four in reverse. Capable of going 18mph on the street or on the rails, it has options like nitrogen filled tires, air conditioning, and all kinds of other aids and equipment to suit the different environments and loads that it will be tasked to move.

As you would imagine, this thing has some pretty mondo axles under it. While we do not know who makes them we do know that they are talked about as being equipped with “heavy duty no spin differentials” and the axles are of the planetary type. The big 8040 can exert some 60,000lbs of drawbar pull. That’s awesome!

Seeing them on the tracks is one thing but below we actually have video of a Shuttlewagon plowing snow! We’d love to have a shot to play with one of these massive machines like this! The unit you will see plowing is not the big 8040, it is from the smaller Commander series line but it rules nonetheless. We love finding out about new machines that we didn’t know about before, especially when they are as cool as this!

Check out these videos of different models of the Shuttlewagon working –

It's Tops! This Historic Sales Video For The Allis-Chalmers HD-19 Crawler Tractor Is A Fun Watch Off Into The Sunset: Darrell Waltrip Announces His Retirement From NASCAR Announcing