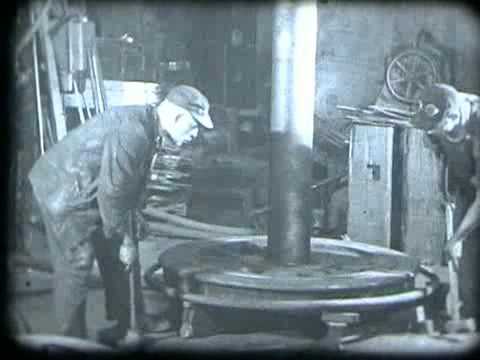 No hype, no BS, no exaggeration, this video is friggin’ awesome. This is footage from 1928 news reels showing the construction of a massive 3,600hp locomotive in Canada. It made us want to smash our computer on the ground for the simple fact that computerized automation and design has killed lots of the skill sets used in this video. To see men building wooden bucks to come up with the actual shape of the engine, the huge boiler plates being formed, the massive connecting rods (drive rods) being forged by a press the size of a house and four brave guys, molten iron being poured into molds, the engine being literally lowered onto its axles, etc, is beyond description. It is 15-minutes of a window into a world that no longer exists and it is enthralling.

We are of course romanticizing the whole thing. These jobs were probably an 11 on a 0-10 scale of awful. From the heat and dust, to the ever present danger of sudden death from huge pieces of metal swinging around, we’re not able to place ourselves in this locomotive factory, but damn, it sure is amazing to watch these fellows go about their business.

We have to guess that this engine was designed to haul huge trains over the mountainous western Canadian region. With over 3,600hp on tap and torque measured in planetary volumes, it probably did the job with ease for decades on end.

We’ve got nothing else to say about this other than WATCH THIS DAMNED VIDEO!