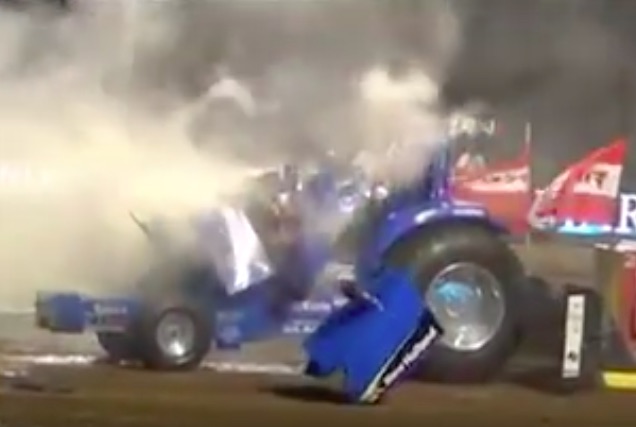 While we have tons and tons of respect for the guys in the drag racing world that run “a lot” of boost, they have nothing on the pulling tractor guys. These guys have been force feeding engines with ever larger compounding setups for decades and the way they have tried to keep their stuff together has been interesting to say the least. From the development of ultra-servers duty head studs to the usage of chains and straps to hold the cylinder heads onto engines during max boost to the necessity of retention systems when the massive chunks of billet aluminum actual break into pieces and try to fly into the atmosphere, testing the bounds of pressure is nothing for these guys. We have heard of pressures topping 150psi but a LOT in some of the most serious machines.

This New Holland is a serious machine and while we don’t know the specifics of the combo we can tell you just by watching this level of destruction that it was really, really, working hard right before it came undone. Because of the clouds of smoke, steam, and sadness along with the shrapnel-like remains of the body, it is impossible to say exactly what has happened but whatever did go down was violent and quick. We have seen huge iron engine blocks blown open like baked potatoes and the aforementioned cylinder head failures, etc. The devilish nature of this video is the fact that there was no warning for the driver or anyone else that this was coming. Occasionally you can see the color of the exhaust change the instant before the engine gives up or you can hear the thing kind of nose over onto its face but not this time. That sucker was working right up to the moment that it wasn’t.

As weird as it is to say, sometimes it takes a deal like this to actually appreciate what all is going on inside these engines and what kinds of internal stresses they face. On a clean pull the thing makes smoke, sounds good, and then shuts down. It looks so easy. Newsflash: it ain’t!

Press play to see what happens to this pulling tractor when it all goes wrong under boost !