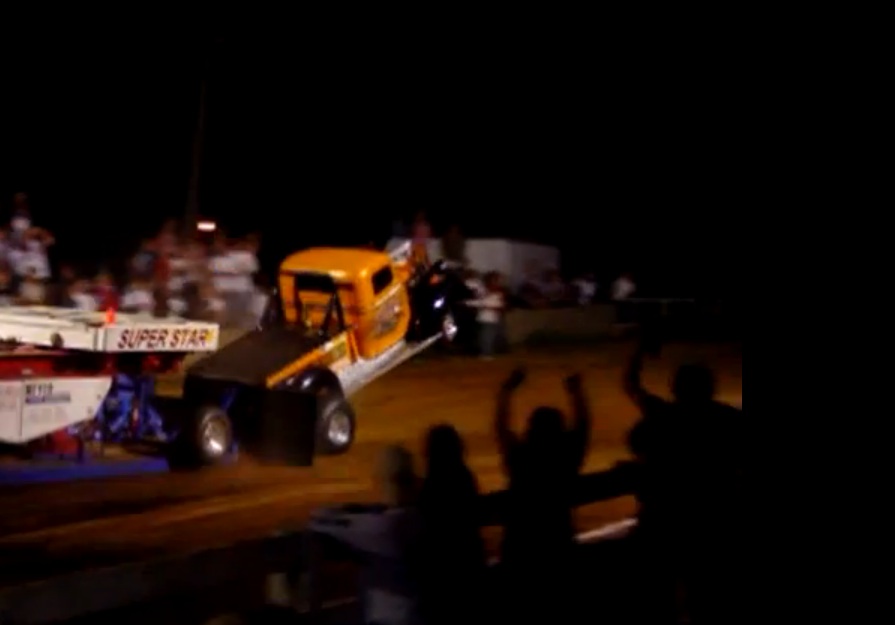 BangShift contributor ace Doug Gregory has a YouTube page and he has posted  links that we saw to videos that really spun out crank, specifically these were clips of 1980s pulling and monster truck stuff featuring the vehicles we worshipped as kids. Perhaps king of them all in the pulling realm was the Orange Blossom Special, a 1937 Chevy truck that had zoomies and the front end perpetually five feet in the air. Alan Gaines was the man behind the truck and it wasn’t just a pretty face. It was a USHRA pulling champion and a contender year in and year out. It was also astonishingly famous during its heyday being featured on the Bigfoot and friends Saturday morning network cartoon and replicated millions of times over in children’s toys. I had this truck in several variations, including one which may have been called the “power puller” where you had speeds, ranges, and all kinds of fun stuff to play with on it.

In this video we see Gaines at the wheel making an exhibition pull in front of a crowd that is literally going nuts for him. I probably would have been shedding tears of joy if I were in the crowd last night. Sadly the closest I have ever gotten to seeing this beast in person is through a television screen or computer monitor. I have it on my “list of stuff to do” to get out there and actually get a first hand look at this roaring beast.

If you were a kid of the 1980s or just someone who like things that are great, press play below. Thanks to Doug for this living and breathing trip down memory lane. Man this thing is great!

Go For A Lap of Road America in a Jerico Equipped 1970 Mustang Road Racer From Revival To Restoration: Starting Work On A Flood Victim 1978 Ford!