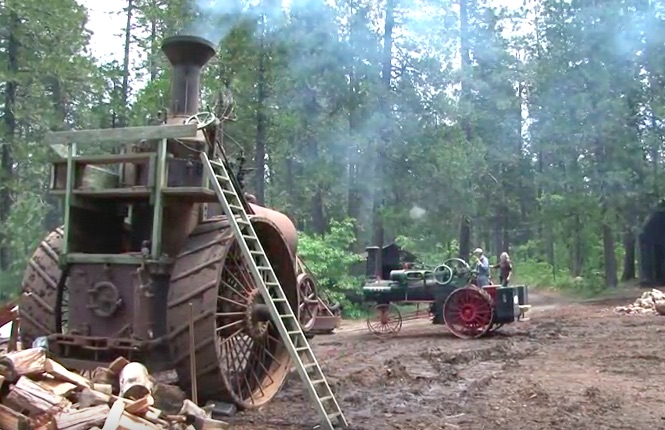 Oh if these things could talk! This fun video takes a look at two big old steam tractors as they are fired up and driven to a common location to have a “reunion”. That’s probably too heavy a word but it is the one they used in the title so I am using it here. The two machines you are looking at are a 1909 Case and a 1906 Best. The Best is the absolutely gigantic three wheeler that requires the large wooden step ladder to get onto. The Case is a huge unit in and unto itself but next to the Best it looks like a half scale toy.

The sad thing about these big machines is not the number of them left because there are more than you think but rather the number of people who can safely operate them. As you will see there are multiple petcocks that need to be opened and monitored, bled, and closed back up as the steam is coming up in the tractor. Once the thing gets to pressure keeping the boiler making the right amount of heat is enough to drive you batty. The good thing is that steam enthusiasts revel in stuff like this and we love watching the videos so everyone wins.

We have told this story before but the Best and the Holt company merged in 1925 to form the Caterpillar company that still exists as a global leader in equipment today. Case is a name that is still present in the farms and working areas of this country and that’s cool too.

Anyway, it is nearly impossible to get the size and scope of the Best tractor through video. Only when someone passes by one of those incredible huge steel wheels do you realize how massive the thing is! The Case is no spring chicken itself and there is some great footage of the driver steering the thing around corners by making literally dozens and dozens of turns at the wheel. We believe it is a she that was doing the work with all that hair flopping around, right?

While there maybe no overt drama there is a lot of cool video showing these elderly machines trundling through the woods, and eventually to their meeting site. Which tractor would you pick? I loves me some Best!