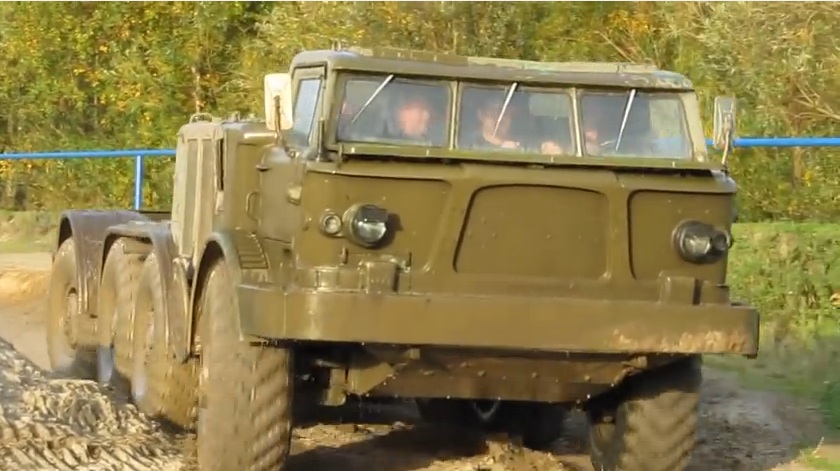 BangShifter Josh Moe sent us the tip on this cool video that was taken in Germany featuring a massive Russian ZiL-135 eight wheel drive truck dominating an off road course like it is cruising to church on Sunday morning. While the Russian military may have lacked some of the creativity and advanced technology of its rivals during the Cold War, it certainly never fell behind in toughness, simplicity, and machines that could operate in the worst conditions possible. The ZiL-135 is a perfect example of this. Roughly as complicated as a hammer and slightly less creative in design, this vehicles was intended to haul surface to surface missiles wherever they needed to be carried to for launching against the enemy. These trucks were built from the late 1950s right through the mid 1990s with few if any changes. Powered by a pair of (roughly) 420ci has V8s (which you can actually see working when the truck passes by the camera) the Zil-135 would get 1-mpg when loaded and hauling at its rated top speed of 40mph. The truck had a range of about 250 miles with a full tank of gas, which means that it has one huge ass tank. The combined horsepower total of those two big V8s? How about 360. Your small block has way more. The transmission was either a six speed auto or a five speed stick. The manual must have come in the sport model or something.

One of the things that struck us was how stiff this sucker is. We have showed you videos in the past of other multi-wheel drive military vehicles from around the world and they have lots of articulation and movement. This thing articulates like a steel beam. Perhaps the theory was that as long as this is and as many wheels as it drives there would always be something in contact with the ground to keep it moving forward or backward.

With no missiles on its back the truck weighed in at 11.75 tons and since we’re not quite up to snuff on missile weight we have no idea what it weighed when the cargo was added. Call us nuts comrades, but with the stiffness of how this truck rides, we’d be scared poopless that something would shake loose or otherwise detonate the explosive cargo riding above us when this machine was in missile transport mode. At just over 30ft long and 10ft wide, parallel parking this thing in downtown Moscow would be a real pain in the backside but then again, with a missile on top things may open up for you.

Watch a Drag Race Engine Make a Dyno Pull From 8,000 RPM UP! This 1966 Chevy II Nova Is Retro Cool And With Some Love Would Be A Rad Rocky Mountain Race Week Machine