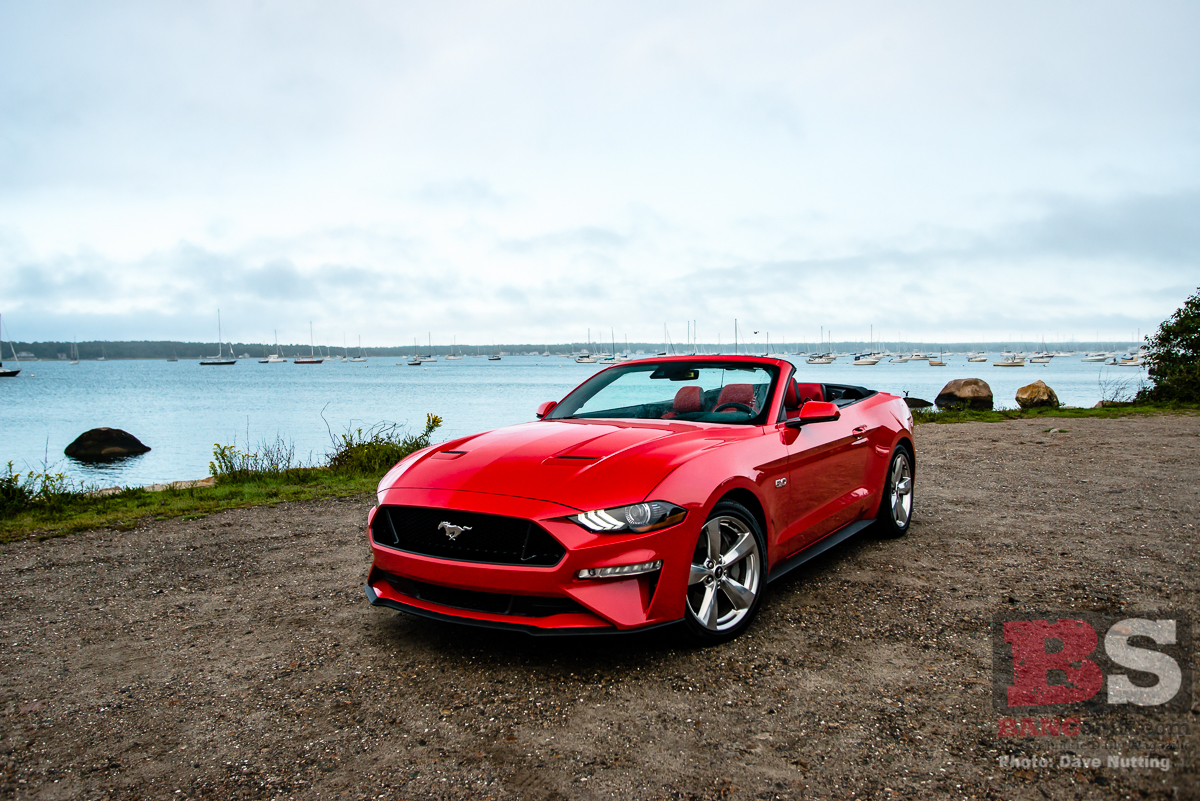 (Photos by Dave Nutting) –  Yawn you say, scroll on by. A drop top, automatic Mustang. Boring. While this adult version of the Mustang perhaps lacks the wanton fury of the 8,000 RPM GT350R, it is the right car for the buyer who wants it and those are far more in number than the specialized weapon version we just mentioned. Having recently been able to spend some time with this car and cruise it, I can honestly say that it’s has moments when you worry about Mustang’s future and then loads more time when you just enjoy the experience of being behind the wheel of the most modern iteration of Ford’s wonder car that’s been in production since 1964. 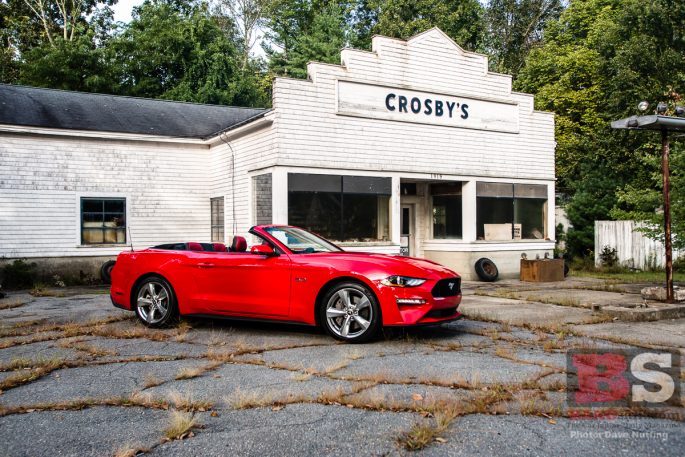 The worries creep in when you see just how nice the thing is and when you see a $50,000 price tag. This GT Premium model was definitely optioned to appeal to a specific buyer and it’s basically the same person who goes and buys an automatic base Corvette to take to the golf course and on drives occasionally. With the leather interior, upgraded sound system, and myriad of comfort-based options it is easy to think that the cars have gone soft and will get more squishy as time goes on.

And then you find the drive modes.

And then you find the active exhaust settings.

And then you feel like you are racing an SCCA class car. 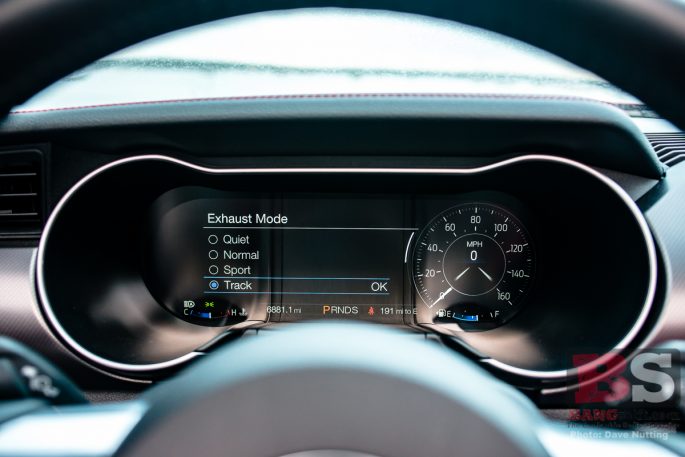 Back in the day “drive modes” basically dragged shift points out and called it a day. The “performance” button in some cars was just plain sad. With the level of electronic complexity and control of today’s cars, the settings you choose define your experience and this Mustang is the most stark example we have ever seen of it. Going from Normal to Sport or Track makes the wheel weighty as the electronic steering gives less assistance. It turns the 10s speed into a brainy unit that knows what gear it needs to be in for what you want to be doing. It turns the exhaust into a straight through roar factory that makes the factory 460hp engine sound like every one of them is trying to escape through the rear tires.

This thing goes from Clark Kent to Super Man and back in no time. It goes from commuter to autocrosser just as quick. 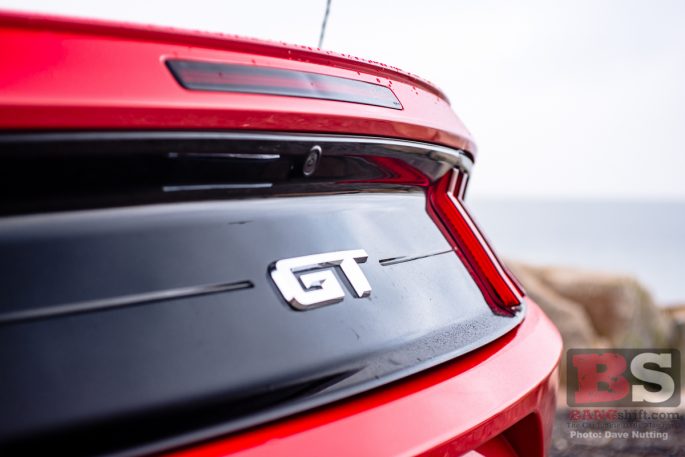 The craziest thing about the evolution of the Mustang is that you used to have to settle for buying a specific model to have the car you wanted. The Shelby for Chevy killing performance, the LX during the 1990s for low buck fun, the V6 convertible for sensible cruising around. Now, you buy one Mustang and get a few different cars in that same wrapper. This thing really is unbelievable..and it is a convertible, which in my person book of tastes, knocks five points right off the top and normally causes me to scowl. This car does not get the penalty or the inside down smile. I thoroughly loved it.

This may not be the most BangShifty way to get your 2019 Mustang GT but it sure is one of the most interesting. Don’t just take my word for it….(Story continues below)

Let’s face the facts: The drop-top Ford Mustang is nothing new.  Hell, the first-ever Mustang sold to the public was a convertible! That said, this Mustang is among the best, if not THE best, Mustang built to date. It sits among the best “pedestrian” pony cars ever offered to the public. Yes, that’s a bold statement, but hear me out. 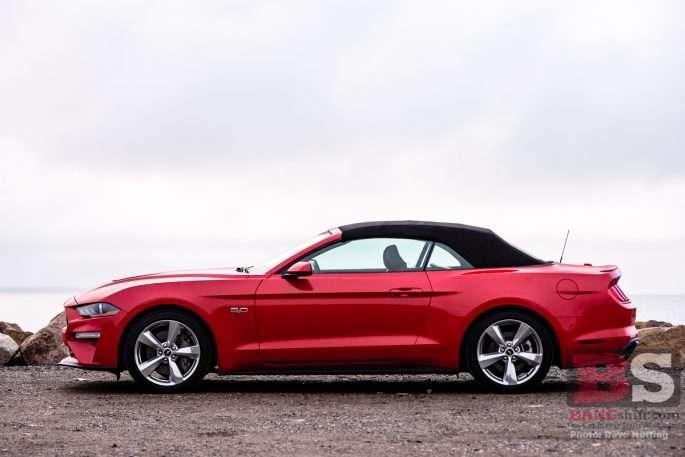 I’m no stranger to these cars, and pony cars in general. I’ve owned Fox Body cars in the past, as well as their GM F-Body counterparts over the years. I even have a perpetually under-the-knife 1979 Trans Am sitting in my driveway. A good friend of mine owns a 2011 GT which I’ve spent some time piloting around as well. All of those cars are good at making rumbly V8 noises and going fast, with comfort and the ease of everyday use taking a back seat to everything else. This thing, however, is a car that transcends genres and needs. Its like a swiss army knife on wheels.

Want a fast-looking car that stands out in a crowd? Check. These are available in a number of retina-pleasing colors, including the Race Red hue you see here. According to Ford’s Build and Price tool, there are no less than seven sets of optional wheels for the car, with one to fit everyone’s tastes.

How about a classic cruiser to hop in for trips to the local ice cream stand? This is your chariot. Once I figured out how to lower the top, it was super easy and quick to raise and lower. Since you are reading this on BangShift, the question begs: is this a legitimate performance car that you can daily drive?

Oh yes. Very much so.

In fact, this is one of the best performance rides I have driven in terms of everyday use. There’s a driving mode for just about every situation built right in, and even multiple steering modes to change up the feel of the car. Switching the steering to Comfort and keeping the driving mode on Normal is the best option for giving dear old mom a ride in the car. It loosens up the steering and softens up the 10-speed automatic’s shifts to a nice, cushy feel akin to her Buick. You get just a faint note of engine rumble in the exhaust note, but she won’t notice.

Click the steering and driving modes onto their respective Sport settings, and things start to get interesting. The gear indicator that pops up on the left of the gauge cluster sprouts a little “S” under it, and the steering tightens up along with the shifts. Since this car also has the optional multi-mode exhaust, you can hear the 460 horsies let loose a bit more. Yes, the car has that weird thing that’s common on many new sporty cars that pumps engine noise through the stereo, but with the top down, all you could hear was the actual exhaust note coming out the back. And that exhaust… oh man, it sounds AMAZING. The Rich Sounds of V8 Pleasure ™are still reverberating in my brain just thinking about it. It’s raspy and borderline obnoxious under throttle, but unlike that absurdly loud cat-back you bolted onto your old 1991 5.0 notchback back in the day, a flick of a switch shuts it up when you need to take a break. Many people lament performance cars with automatic transmissions, myself included. But if manufacturers keep building ones like the one in this Mustang, I really won’t mind. In Sport Mode, it behaved properly and even relinquished some control to the driver through the flappy paddles jutting out behind the wheel. It holds gears as long as you want, and even stays in them when you let off the gas. If you spend any time sitting in bumper to bumper traffic on your commute, consider it. It’s quite the upgrade over the Hurst Dual Gate-shifted TH350 in my Trans Am, that’s for sure! 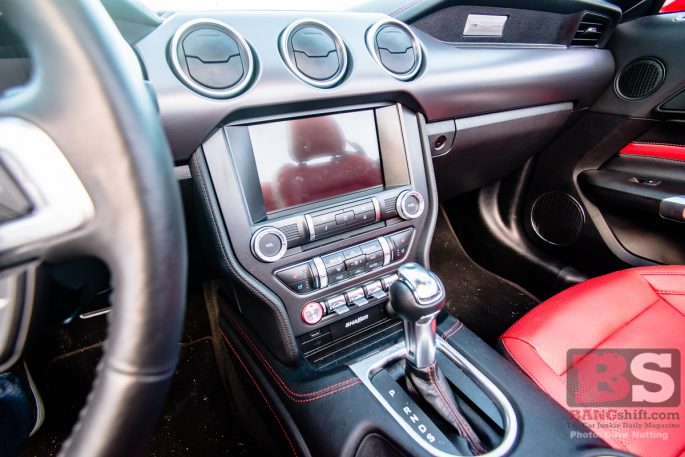 There’s another driving mode of note for the performance-minded, and that’s Track Mode. When you switch this on, it even tells you to consult the owner’s manual before piloting it into errant crowds and jersey barriers. In this mode, all bets are off, and so are all the safety nannies. I’m glad that this made it past the lawyers for when you really want to let loose, but on the street, Sport Mode is honestly all you need. If you plan on thrashing the thing at a local track day or street night at the drag strip, Track Mode is here for you.

And as a nod for those who live where the weather gets cold enough to hurt your face for a few months out of the year, there’s a mode for that as well. It does the opposite of Track Mode and increases the sensitivity of all the safety systems. Since there wasn’t a foot of snow on the ground on this pleasant late summer morning, we couldn’t really test it, but word has it that it works well in conjunction with the right rubber wrapping the wheels. 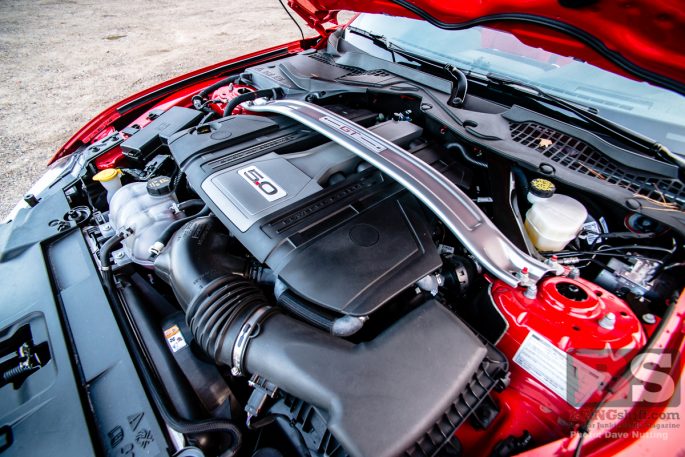 What about the rest of the car? While I haven’t been behind the wheel of the current Camaro, I did take a loaded 2018 Challenger GT AWD for a spin recently. Even though the Dodge Challenger is larger inside, I found it surprisingly easier for my XXL American carcass to get comfortable in the Mustang, both with the top up and down. It was very easy to find a good seating position, and I had easy access to all of the many controls. It 100% passes the Tony Test. The stock GT seats are supportive, and for less “substantial” individuals, they also offer Recaro buckets as an option. And about those controls: it has more buttons and switches inside the cockpit than a late 1980’s Pontiac, which I didn’t think was possible, but here we are. This was a GT Premium, which gets you leather seats (these ones were red, too!), an upgraded infotainment system, and more. I’ve driven contemporary luxury barges with less luxury than this car. We’ve come a long way from the rattle traps we all think of when talking about pony cars.

While all of this does come at a cost (this car stickers for a hair above the $50K mark), it’s a hell of a car that can stand up to the luxury performance convertibles from just about any manufacturer out there, and it’s not even trying to do that! With the recent news that Ford is ditching their non-Crossover cars in the US except the Mustang, I can certainly see why they are keeping it around. It’s better than ever, and (hopefully) not going anywhere anytime soon.