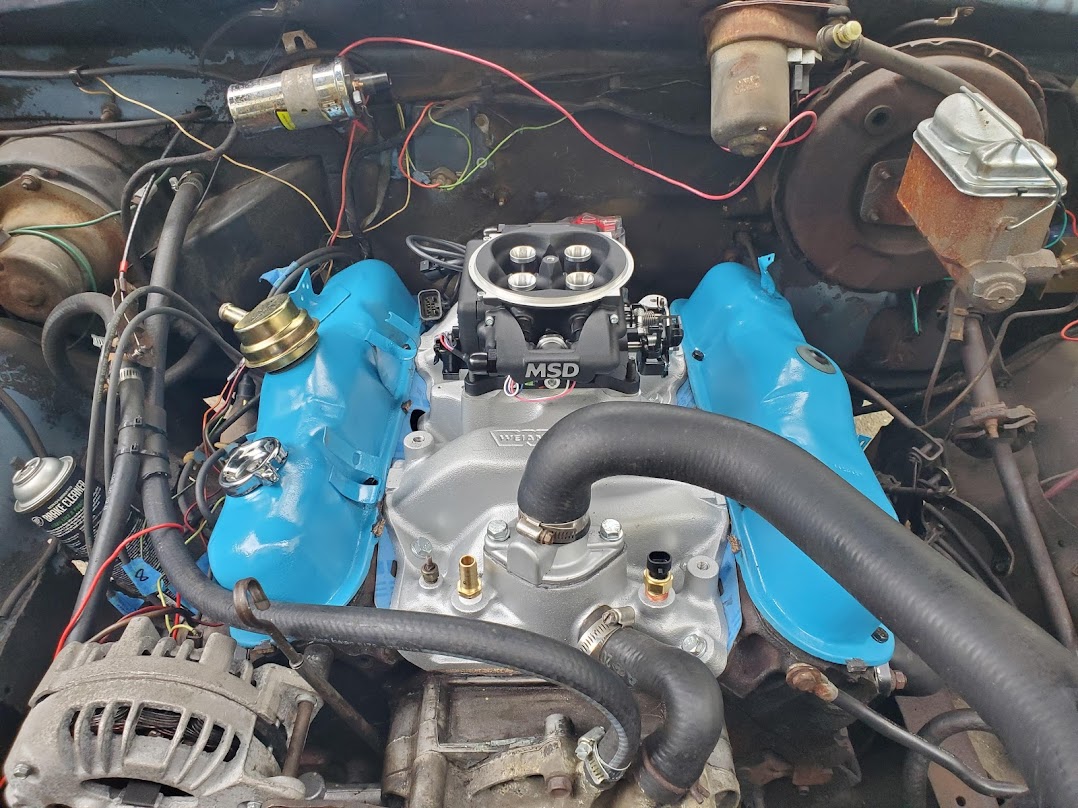 Welcome back to our coverage of Project Power Laggin’! Follow along as we take a tired 1979 Dodge W150 Power Wagon we found in Central Maine and transform it from a derelict roadside attraction to a dependable, powerful weekend workhorse that lives up to it’s given name! In this installment, we prep the truck’s stock LA 318 V8 to accept our MSD Atomic 2 EFI with a Weiand Stealth aluminum intake!

Last time we checked in with Project Power Laggin’, we had just finished modding our stock fuel tank for a return line, as well as installing a new electric fuel pump and fresh fuel lines. With that buttoned up, let’s turn our attention to the intake swap. Since the Atomic 2 throttle body has a squarebore 4-barrel base, we needed to ditch our stock 2-barrel cast iron intake. After looking at both of the Chrysler LA V8 Weiand intakes in their lineup, we chose the Stealth. With a proper squarebore pad, it would work perfectly with our new fancy EFI setup. Let’s take a look at the new intake and things to consider when you make the swap. 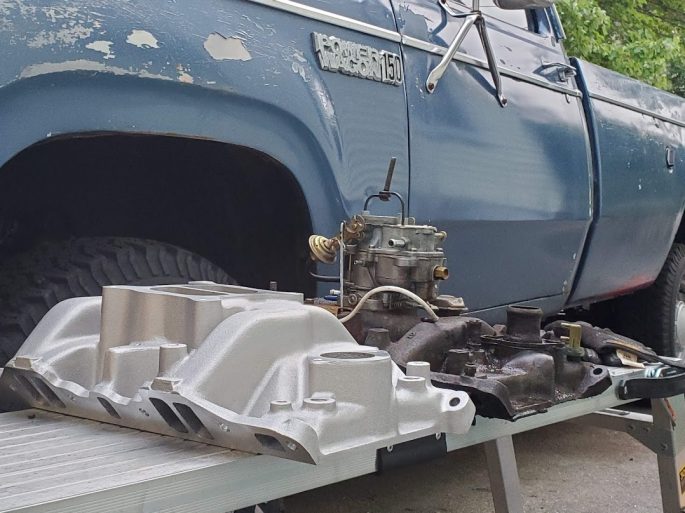 Compared to the stock cast iron 2bbl intake, not only is the aluminum Weiand Stealth intake much taller, it is considerably lighter. There are also no provisions for EGR, but there are plenty of ports for both vacuum and coolant and even the stock heat crossover passages are retained. Our ’79 truck 318 was built at the height of the Malaise Era, so it has smaller ports than the intake, but we decided to just send it. It has to be better than stock, right? 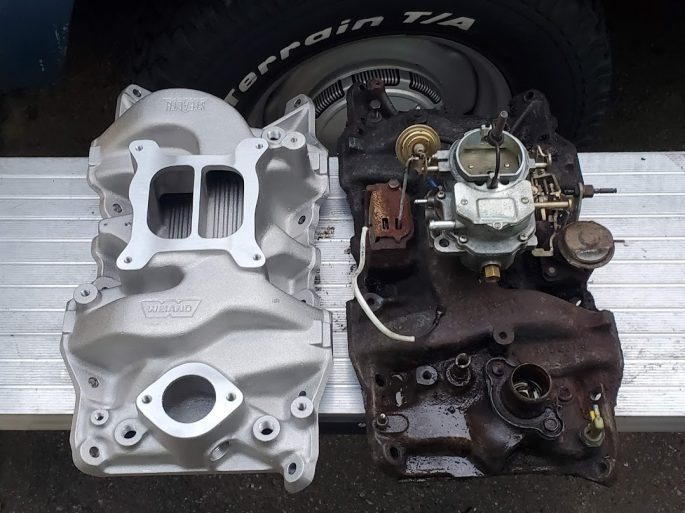 Another look at the intake, this time from the top. One big difference from the stocker is the thermostat housing. LA intakes can use one of two thermostat housings, and the Weiand intakes use the “Early Style” housing, which is slightly different than the “Late Style” on the stock intake. And that’s good, because both of the bolts holding the old housing on were frozen solid! 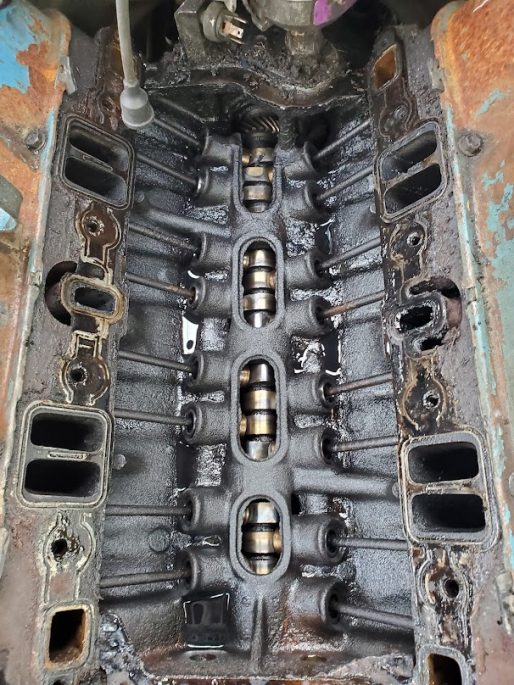 With the intake off, we took a quick look at the lifter valley for any signs of trouble. Aside from some minor sludging, things looked decent enough for a 42 year old engine that has never been opened up before. We cleaned things up, scraped some of the gunk and sludge up, and sucked up any debris with a shop vac. 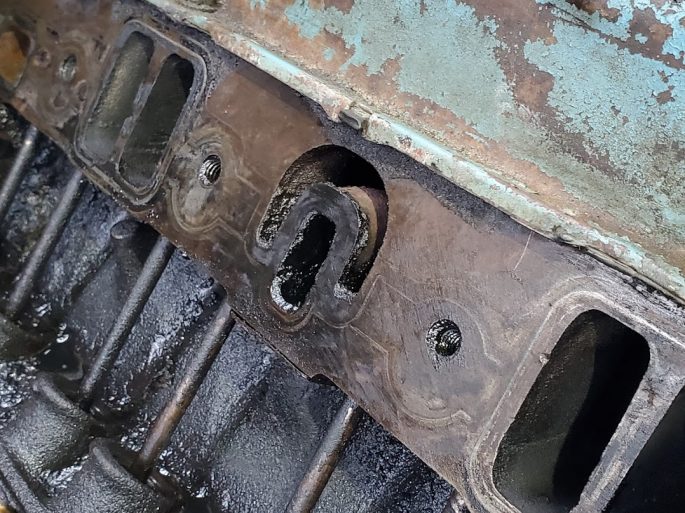 One common mod we wanted to perform was blocking off the heat crossovers in the heads. Heat crossovers are nice to have on a bone stock carbureted vehicle, but considering that we were converting to EFI and looking for better performance, we opted to block off the ports in the heads. 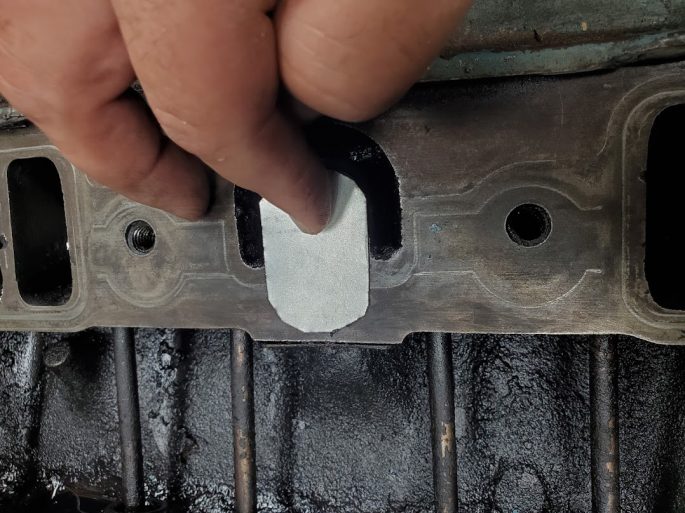 People have used all sorts of methods to do this, from welding them shut to cutting up a beer can. We used some thin galvanized sheet metal sourced from a home improvement store, traced out some block-off plates using the intake gaskets, cut out a pair of block-off plates, and used some gasket shellac to hold them in place while we bolted on the intake. Super simple. 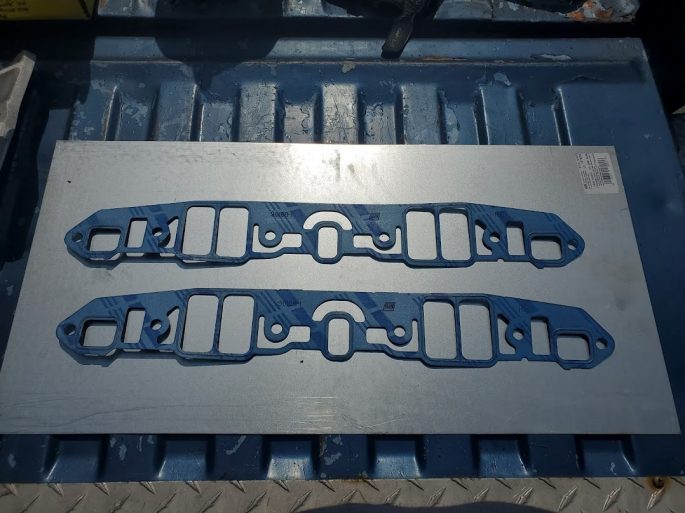 And speaking of those gaskets, you are going to want to use “improved design” gaskets like the Fel-Pro MS90109 and not the stock-style metal ones when swapping on an aftermarket intake on a LA Mopar Small Block. 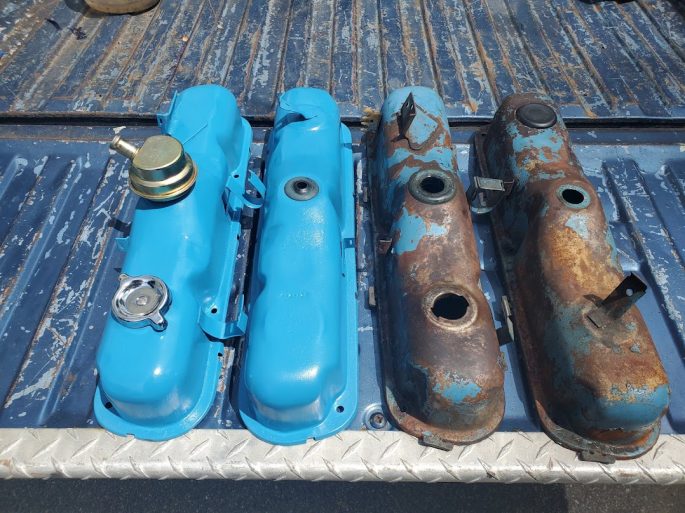 Since we had to pull the valve covers to install the new intake, we figured we might as well swap on some freshly painted ones! We pulled these a while back from an early 80’s D150 at a local boneyard to have as spares, cleaned them up, and slathered on some fresh Chrysler Corporate Blue. They are slightly different (there’s a plastic plug missing that just served to leak oil everywhere), but they will do the job just fine. 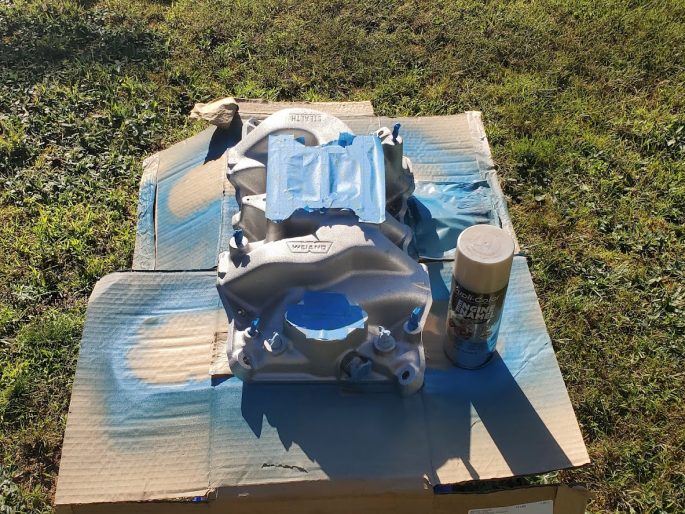 Speaking of painting, before we installed the intake, we gave it a few coats of high temp aluminum cast coat paint. Again, New England would turn raw aluminum into a pitted mess in a few weeks. This will preserve the good looks and protect it for at least a few years. 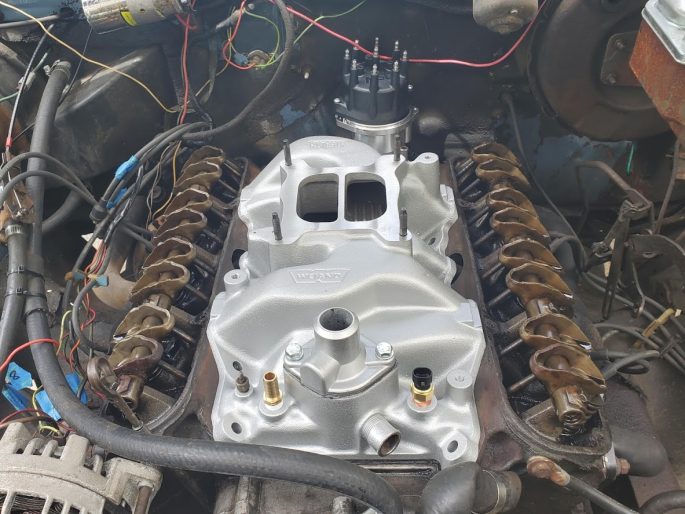 With any intake swap, test fitting for clearance is important, especially when determining what gaskets to use. There are all sorts of opinions on using the cork end seals that come with most older V8 gasket sets, and honestly, it depends on clearances. Some people like to run a thick bead of RTV instead, while others run the end seals. After some test fitting, we found that the end seals would help the intake sit properly, so we used them. Just make absolutely sure to get a good blob of RTV in the corners, as well as run some around the coolant ports. This will help keep fluids from leaking everywhere. 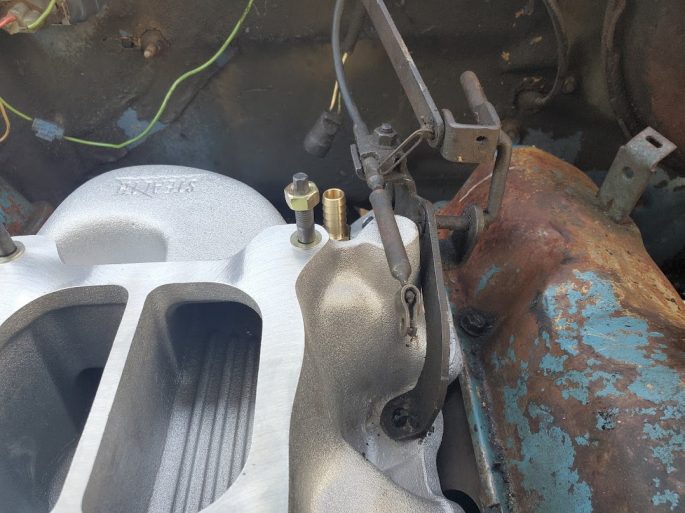 We did run into one unexpected problem with the intake: the stock two barrel throttle and kickdown linkage is not at all compatible with the taller runners and different angles on many aftermarket intakes, including our Weiand. Bummer. 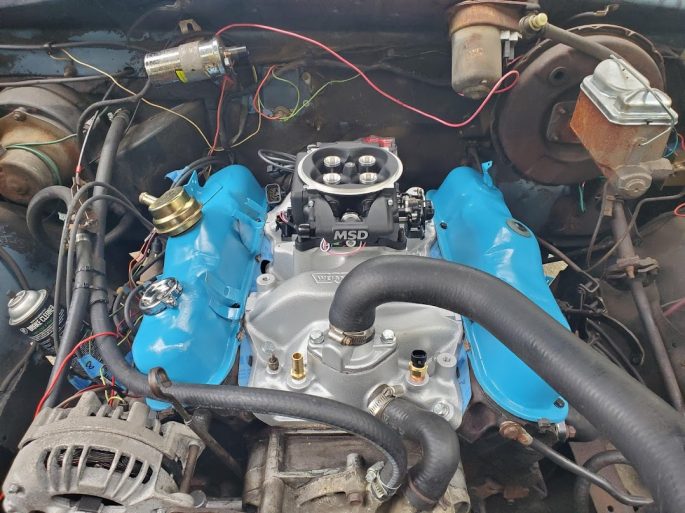 Next, it was time to bolt the throttle body onto the intake. These bolt on just like any squarebore carb, and they have similar linkage and even vacuum ports like you are used to. If you already have a four barrel carb sitting on your intake, you can likely even use all the same components to hook up the throttle and kickdown. Since our 2 barrel carb throttle and kickdown setup wasn’t going to work, we had to find another way to hook those up. 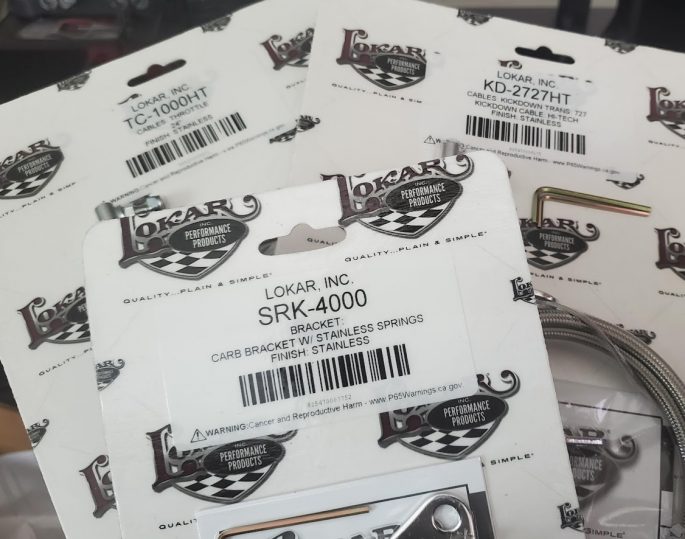 There are a few companies out there that offer solutions and adapter kits for the stock Mopar components, but we ended up springing for a Lokar throttle cable, 727 kickdown cable, and a throttle bracket made to handle both. 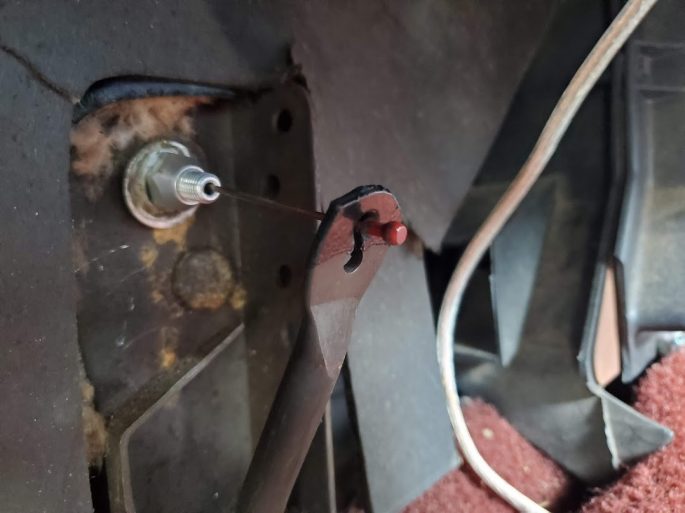 The throttle cable does require a little bit of modification to fit the stock gas pedal. The coated part of the cable right behind the retaining ball is slightly too thick to slip into the pedal, so you’ll need to slightly enlarge the hole in the pedal. And I mean slightly. It still needs to be tight enough to retain the cable, otherwise the pedal will just flop around. But once that’s done, you get all the slack out, make sure you can get full throttle travel, cleanly cut the cable with good snips, and lock it down. It also has a bit of adjustment for fine tuning. 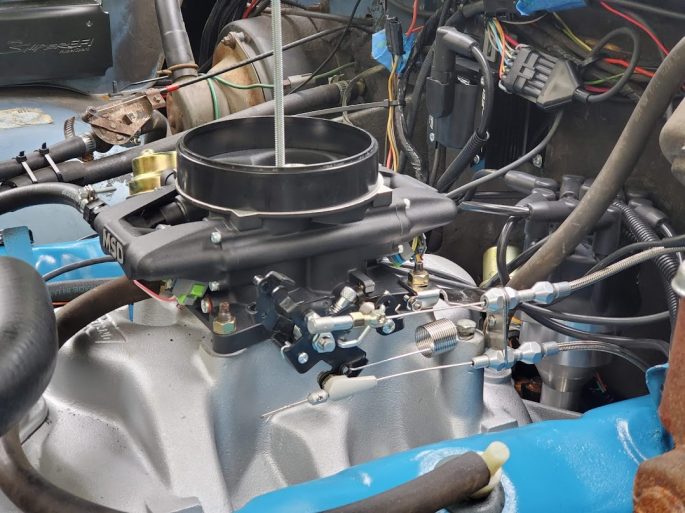 The kickdown cable is a bit more involved. Mopars of this vintage typically use mechanical linkage, and once you change intake height or any of the angles of the linkage, things can get weird. Switching over to a cable allows you to fine tune kickdown parameters while allowing you to use whatever intake/fueling situation you want. Basically, you have to remove the old linkage arm, bolt a supplied bracket to the transmission case as specified, route the cable backwards and then loop it toward the engine, and insert into the throttle bracket. From there, you measure how much cable and housing you need for your vehicle and cut accordingly. After that’s complete, fine adjustments are made by pulling the cable through the sheath and locking it down again. And don’t over-adjust, or else you’ll end up with wonky shifting and possibly worse! 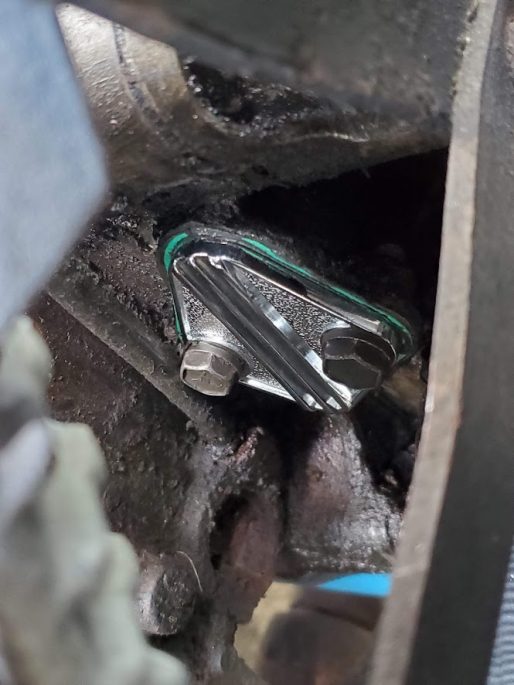 With that out of the way, we moved on to something easier: we removed the dead fuel pump and installed a block-off plate we scored cheap on Ebay. It was under $10 and even came with the gaskets. Can’t beat that!

With the intake installed, we were ready to move onto getting our new ignition system bolted onto the truck. Stay tuned for our next installment, where we go over mounting up the new ignition box, coil and distributor, as well as getting everything wired up. We’re getting close now!

Army Truck Trailer Build: Adding Gnarly Ramps, Deck Mounts, And The Flatbed To The 7 Ton M1083A1 Trailer Edd China's Workshop Diaries: His Custom Mini May Look Like An Orange, But It Handles Like A Lemon!