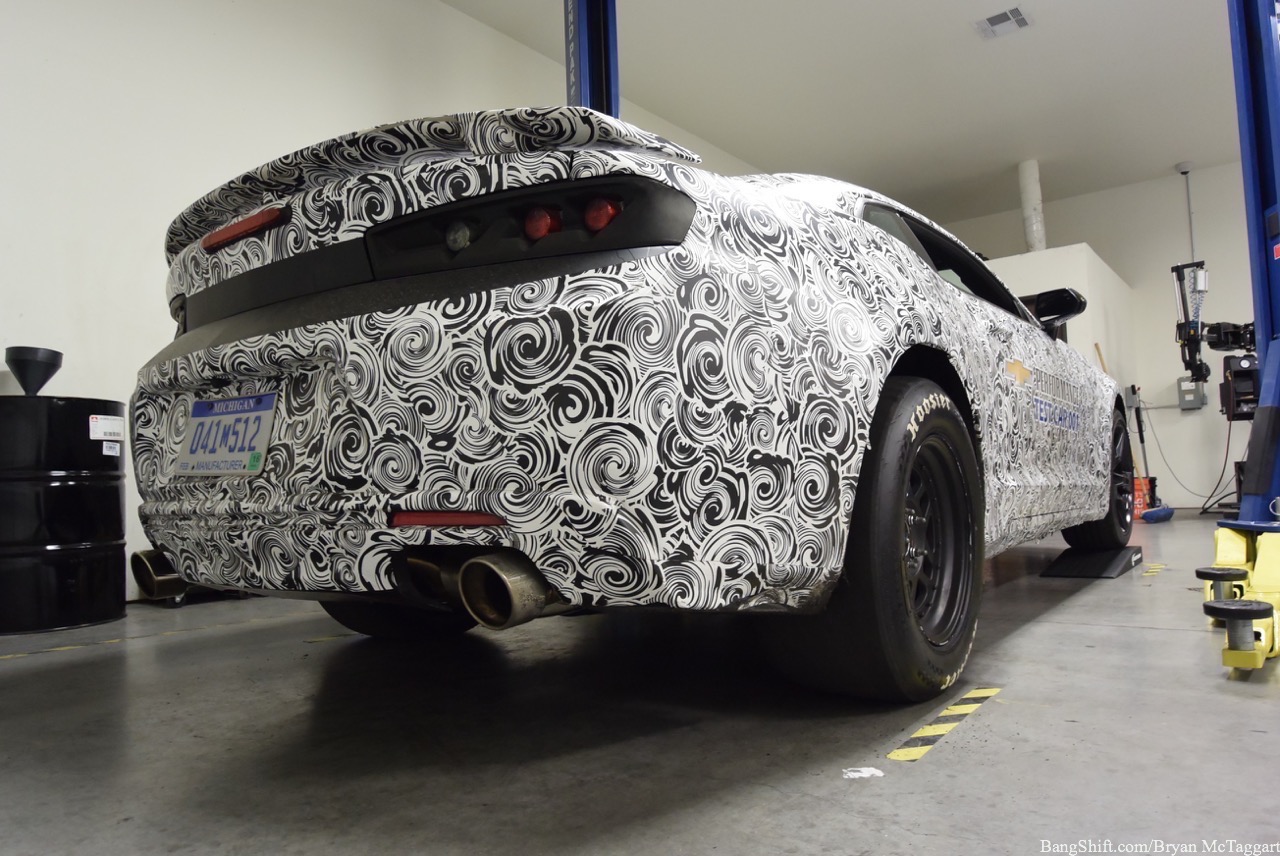 It sat in the center of the building…obviously a sixth-generation Camaro SS, but wearing the kind of swirly camo you see on prototype test mules. Normally, you don’t see Hoosier drag tires sticking out on the back of a factory test mule, and no, this isn’t a COPO Camaro. This is the kind of backdoor, late night build that you would’ve expected circa 1969: factory guys who really wanted to see what the car would do on roads like Telegraph in Detroit. Maybe they’d sneak out a little somethin’ and go hunting some of the Dodge boys. The romance of the 1960s might be gone, but in a way, the Camaro SS Drag Race Development test cars, #001 and #002, bring the right attributes of those days back. 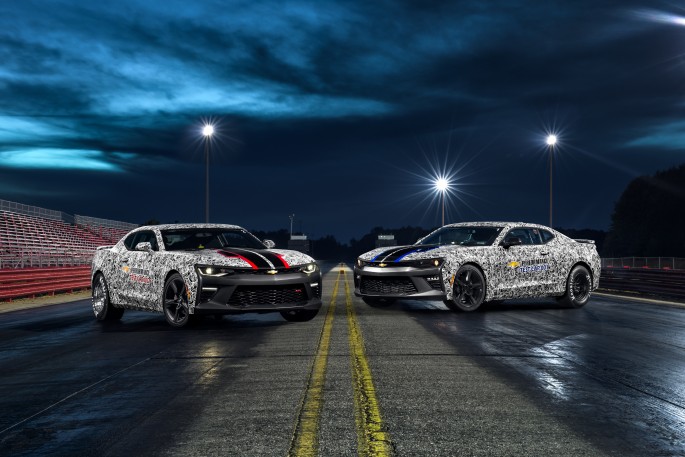 The Camaro team realized that with the fifth and sixth generation Camaros, that a lot of focus had been towards road racing and auto crossing in mind. Certainly, that isn’t in question, especially if you’ve seen footage of Camaros tearing the Nurburgring a new one, or have seen the cars in action racing in SCCA or IMSA. But disconnecting Camaro from drag racing would be a disservice to the fifty years of stoplight runs, Pro Stockers, and sportsmen drivers the world over that have flocked to Chevy’s sport coupe as the go-to drag car. And we weren’t just going to look at it from a distance.

Luckily, we seem trustworthy, so with a little prodding, we found ourselves in a quiet garage at the corner of Spring Mountain Motorsports Ranch with Drag Race Development Camaro #001 on a lift. Here’s what they were willing to talk with us about. We can tell you that it’s an eight-speed automatic car with a 4,200 RPM, but when it comes to the engine, they said they’d draw us a picture of a smiley face and a dead dinosaur feeding it. 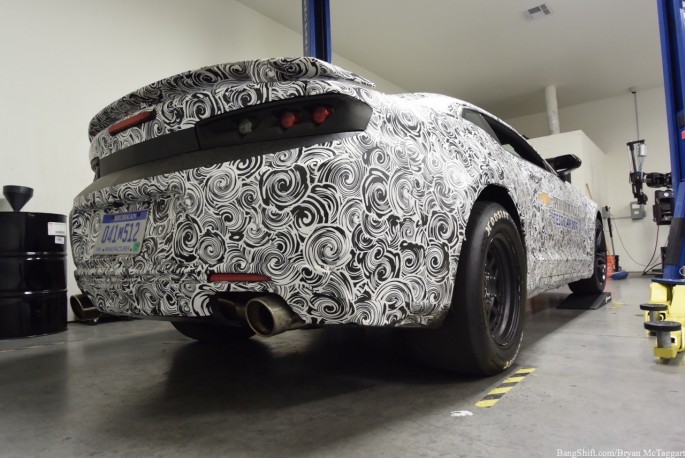 Car #001 was one of the proving mules that had been driven tons, then parked. Perfect fodder for a factory hot-rod. We were digging the pre-production headlights and taillights, but those don’t mean squat. The exhaust you see is a combination of long-tube headers, a cat-less system and Borla pieces…fully illegal for the street, perfect for torture-testing parts. This isn’t a factory lightweight…#001 weighs in at right about 4,000 pounds. 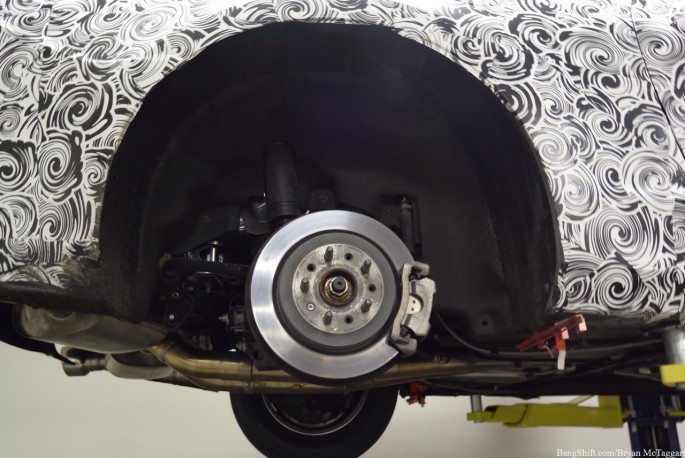 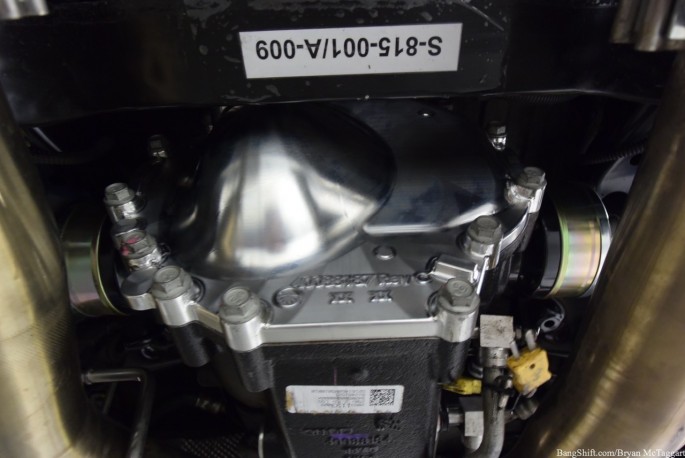 Meet “Gravedigger”. This center section is the unit from a fifth-generation ZL-1 modified to fit in the sixth-generation IRS unit. How stout is “Gravedigger”? They haven’t killed one of these units yet. They’ve snapped driveshafts, axleshafts, and all sorts of issues, but not this monster. No joke, it looks like the pumpkin from a 3/4 ton truck out of the car. The prop shaft is a 6th generation ZL-1 unit. 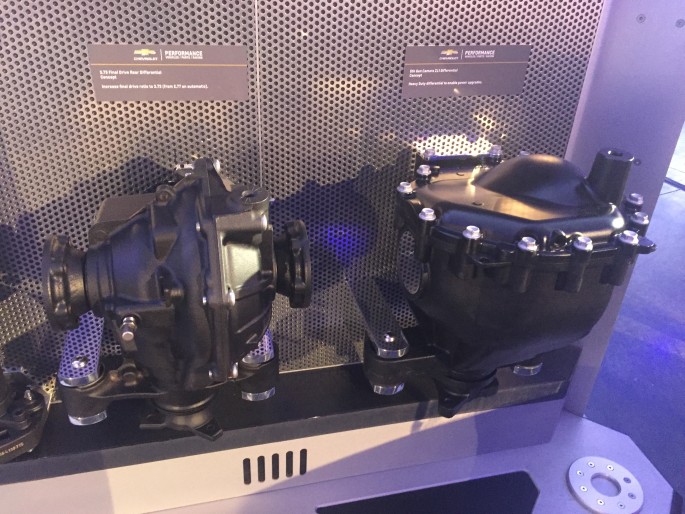 So just how beefy is “Gravedigger” versus the stock unit? It does not get much more dramatic than this when we’re talking about factory parts. 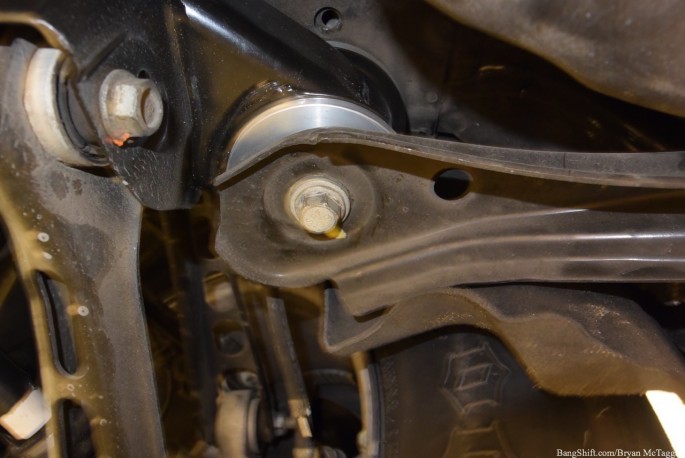 They weren’t up front about it, but the rear cradle was sitting on solid mounts. We asked if they were considering a custom cradle, since the Gravedigger center section requires trimming to fit. That is still a work in progress at the moment. 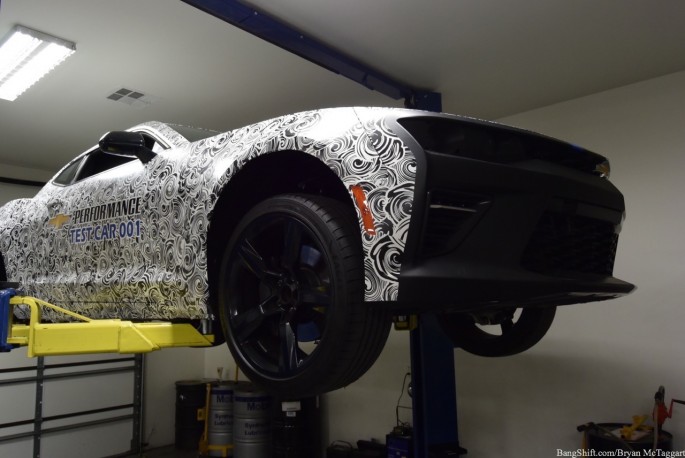 Up front, with exception of the shocks that looked like prototype units, it’s pretty much stock. They’ve tried disconnecting the sway bar and other “old school” tricks and found that overall, there’s little to no benefit with the Camaro. They also haven’t run a skinny front runner wheel setup yet, either. The goal for the program is to create a “weekend warrior” kind of deal that could be used daily, if need be.

Right now, the program is still in the development phase, but they are looking at possibilities like having these parts available through Chevrolet Performance, or even possibly as an option code when ordering the car…for example, you would be able to check a box and order the Small Rear Brake kit and the 16″ wheels, already sized for the car. You’d get the car at the dealership ready for the street, and all you’d need to do is figure out what your Friday night rear shoes would be.

The Camaro SS Drag Race Development Program was created to develop performance parts for 2016+ Camaro models. A test vehicle was built to mimic the typical stair-step enhancements many amateur racers make with their production Camaro SS models, including swapping the differential for a numerically higher ratio and adding horsepower-building components such as a cam-and-heads package to push the SS’s LT1 engine to more than 530 horsepower — and about 600 horsepower with a power adder.

Engineers have made more than 100 passes down the quarter-mile with the development car, including the evaluation of DOT-approved racing and slick tires and a variety of drivetrain combinations.

The engineering team also tested a higher-stall torque converter for greater launch capability, increasing the stall speed to 4,200 rpm with the LT1 engine. That’s approximately 30 percent higher than the stock converter. Along with a custom transmission calibration, the prototype converter allowed the car to launch harder, which improved the 60-foot time significantly and thereby improved the quarter-mile elapsed time.

The best performance to date includes:

“We worked this car just as hard as any serious racer would,” said Dickens. “We made pass after pass, pushing it harder, and were amazed at the capability and durability that came straight off the assembly line.”

To support the greater horsepower and channel it to the ground durably, the engineers borrowed some heavy-duty, proven parts from the Gen 6 Camaro ZL1 including the half-shafts and prop shaft and the beefier Gen 5 ZL1 and Chevrolet Performance driveline upgrade with a 250mm, 3.73-geared rear-axle center section. They nicknamed it “Gravedigger,” because they haven’t been able to break it. The parts might be included in a range of Gen Six Camaro drag-racing parts Chevrolet is evaluating.

Additionally, the test car was fitted with Chevrolet Performance air induction and exhaust systems, as well as a “small” brake system that features small-diameter brake rotors that fit inside the test car’s 16-inch rear racing wheels and slicks.

“The Camaro SS Drag Race Development concept is a work in progress, but Chevrolet is serious about developing parts and packages tailored for drag racers,” said Dickens. “As we continue to develop the car, we’ll be listening intently to customers’ reactions to it and what they believe would help them the most on the drag strip. This is only the beginning.”

Like other Chevrolet development vehicles, the Drag Race Development concept wears a camouflaged exterior. There is, however, no disguising its performance capability when it’s lined up at the Christmas tree.

Mighty Mites: Sometimes It Is Better to Buy Older When It Comes To Yard Tractors And Here's Why! SEMA 2016: We Snuck In During Monday Setup To Show You Neat Stuff!