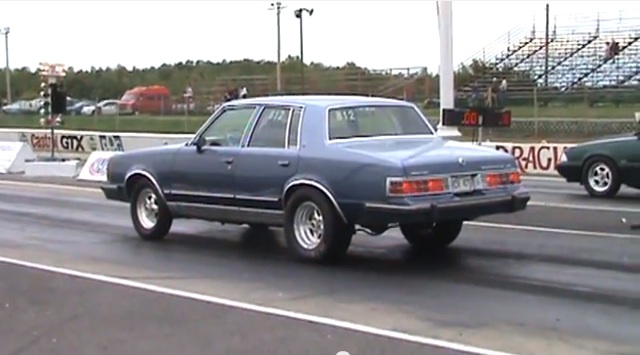 Australian gearheads have been yelling it at us for years: just because it has four doors doesn’t mean that it can’t haul ass and be cool. What could be more fun than hooning your car? How about doing it with a few passengers in the car screaming? Americans haven’t really taken to building up older four-door cars, instead viewing them as valuable parts cars…if it’s the right model. If it’s not, they will move on to whatever is next. Case in point is this 1984 Pontiac Bonneville. It’s an A/G body GM, which means that it’s related to the Chevrolet Malibu and to a slightly lesser degree, the Monte Carlo and all of the associated GM siblings. Those cars have followings, but when even the Pontiac Grand Prix 2+2 Aerocoupe is looked down on as one of the lesser cars of the group, how well do you think the Bonneville sedan, with it’s pillowy interior and “contemporary styling” fared? Not well.

Except, maybe, for this one. Packing a 406 Chevy small block where the yawn-inspiring mill used to sit (whatever it was), the clean Bonnie is a stomper with license plates, running [email protected] in the quarter at Napierville Dragway in Quebec in 2009. The only thing keeping it off of the streets are the missing mufflers…everything else is there, down to the trunk carpeting and the smell of stressed vinyl in the interior. If it weren’t for the wheels, you’d just think that this Pontiac was stashed in a barn for a decade or so. If this Bonneville still exists, it needs to come out cruising on one of the race/drive events!

A Pocket Bio Of Big Oly, One Of The Most Famous Off-Road Racing Trucks Of All Time Watch the Most Violent Dirt Modified Crash We Have Ever Seen - Driver OK, Race Car Obliterated