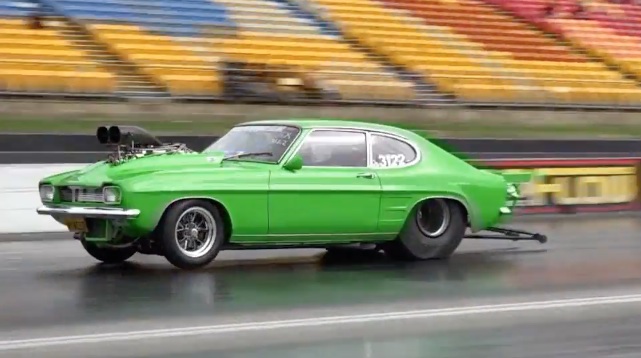 Ford guys, turn away…yes, that’s a lime-green Ford Capri, yes, it’s Australian (the gigantic blower didn’t give it away?) and yes, it’s absolutely, brutally fast. Like “power wheelie at the halfway mark” powerful. But that massive mill under the hood isn’t Ford. Nope…that’s a 2,500 horsepower 510 cubic inch Oldsmobile powerplant! Doc Olds might be scratching his head in disbelief at the choce of car to shove it into, but owner Tristan Ockers knew exactly what he was doing when he made his choice. The Olds mill was in Australia’s fastest front-engine dragster, and when he found it for sale, well…let’s be honest, readers: if you could, you would’ve made the same choice, and for the same reason. Imagine dropping the hammer on this particular monster! As a drag car it’s very impressive, but the fact that it is legitimately licensed and registered as a street car in Australia…legally!…is another feat altogether. We’d love to know just how many cops freak the hell out when they see this thing idling through the center of town!