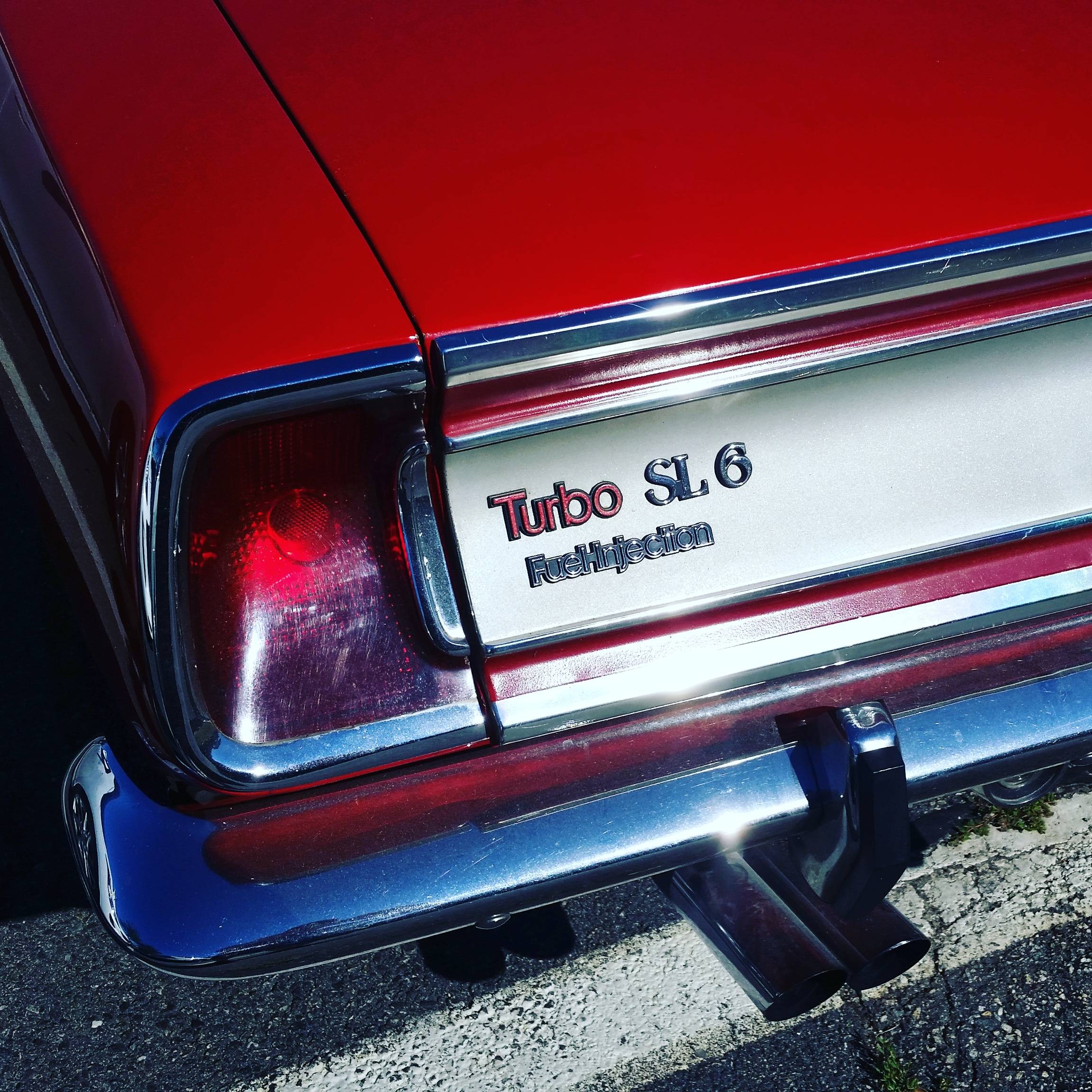 Over the weekend, my wife asked me to run down the local grocery store up the street and grab a few things, a typical husbandly duty that I’m sure more than a few of you are familiar with. I frequent this store a lot, and I usually park my car in an extension of the parking lot that’s further away from the tight spots filled with hulking SUV’s and minivans to avoid my car’s sheet metal from being pocked with dents and scratches. When I parked, I was all by myself in that section of the lot. I went in, grabbed what I needed, and as I’m walking back to the car, I realize something old and very red had parked next to me to presumably avoid the gauntlet of door dents that happens in the main lot. When I walked closer, it turned out to be a 1968-ish Plymouth Barracuda convertible, and it was in great condition! I love this era of the Barracuda, and they are seldom seen around here. I always feel like the later E-Body cars overshadow these earlier examples, so it’s always a nice treat to see one in the wild. 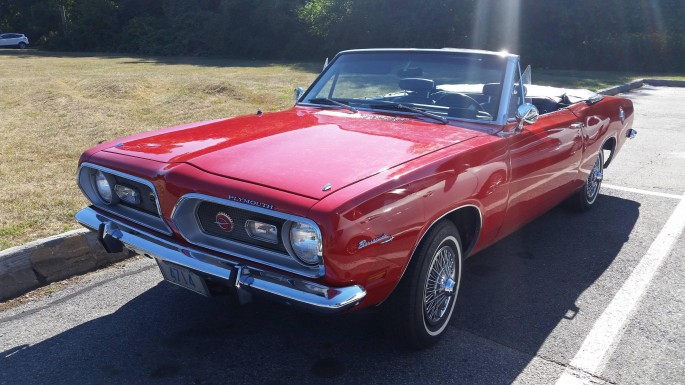 This was a nice example. While I don’t usually like wire wheels and whitewalls on old musclecar-era stuff, it worked here. It looked like a great cruiser, and a nice alternative to the belly button Ford Mustangs you still see everywhere.

I whipped out the ol’ potato…err… cell phone camera, and started snapping pics of this clean example of this alternative pony car, when I saw this little subtle detail: 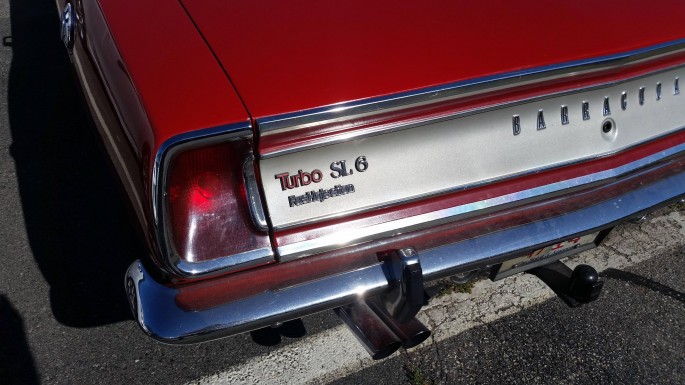 Then, since the top was down anyway, I took a peek inside the car. And I see THIS: 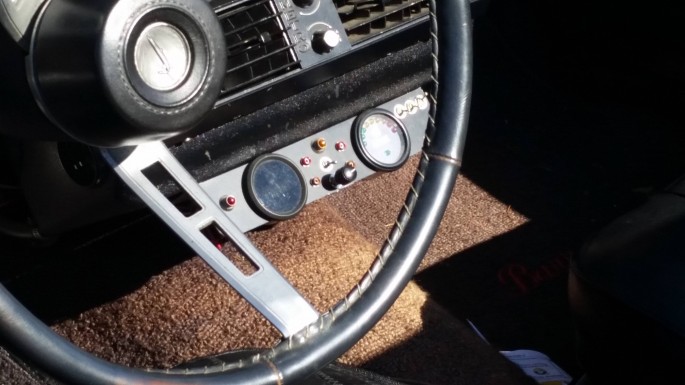 This little gauge panel had all sorts of lights and toggle switches attached to it, and while the gauge on the left was digital, the gauge on the right had the Grand National Turbo 6 logo and was an air/fuel ratio gauge. Could this really be turbocharged and not a badge and sticker joke?

As I loaded up the groceries into my car, the owner and his wife strolled over from the store. Intrigued, I asked, “Sorry to bother you, but I have to know: does this thing really have a turbocharged, fuel injected Slant Six under the hood?”, to which the owner replied, “It would be pretty tacky to put those badges on the back of the car if it didn’t!”.  Then he said, “Wanna see it?” OF COURSE I WANNA SEE IT!!! 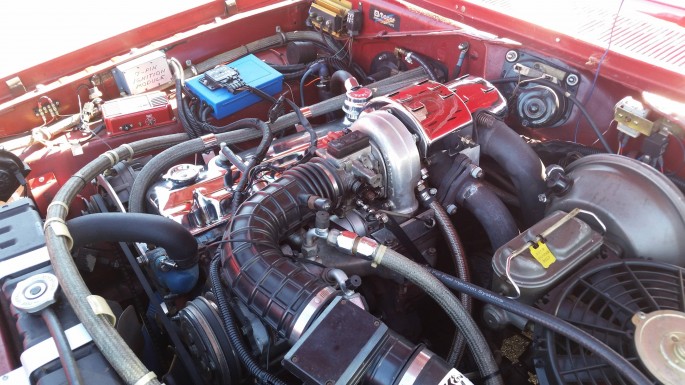 WOW. I was not expecting to see this setup under the hood. I’ve always wanted to turbo and fuel inject a Slant Six, and this one was an amazingly clean install. It even has air conditioning! When taking a closer look, I started noticing some parts I’ve seen on other factory turbocharged cars of the past, like the turbo setup itself. Hmm…

I introduced myself to the owner, and his name was Bob. He bought this car years ago after looking at a bunch of other pony cars, and really liked the looks of it when he saw it.  He also decided that he wanted to convert it to EFI instead of dealing with the wheezy 1bbl carb that presumably came on the car, and started to look into what route to take. This was back in the early 2000’s, and turn-key DIY options were not available, so he started to think about converting a factory setup from something else. He had the 225ci six rebuilt and bored to 232ci, so he thought about what cars were available with roughly the same size engine, and the Buick Grand National came to mind with it’s 231ci V6. Bob even wrote an article way back in 2001 that you can see on SlantSix.org detailing the conversion process and all the parts needed to complete the install. He told me that he wanted to write it all down somewhere so his son who will eventually inherit the car can troubleshoot it if something goes wrong. 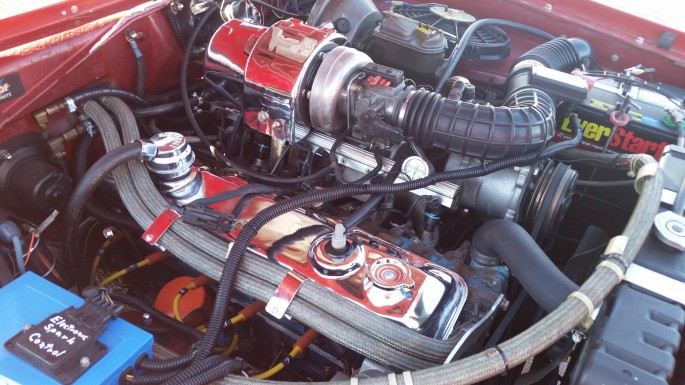 The EFI setup uses an aftermarket fuel rail, but most of the other bits are lifted straight from the GM parts bin. This makes it easy to find replacement parts in case it breaks down in the middle of nowhere. Injectors and turbo were stock-sized Grand National units, and it even uses a stock Grand National ECU tucked neatly under the dash. The intake is an  off-the-shelf aftermarket Offenhauser unit with injector bungs installed.

What I like about the car is how clean the install is. Everything under the hood (aside from maybe the spark control box and the MSD box) has its place and looks like it was built that way from the factory.  No exotic one-off parts, no crazy custom stuff, just great fit, form, and functionality. This car was built to drive, and drive reliably. And the innocuous, sleepy outer appearance of the car just adds to the awesomeness. 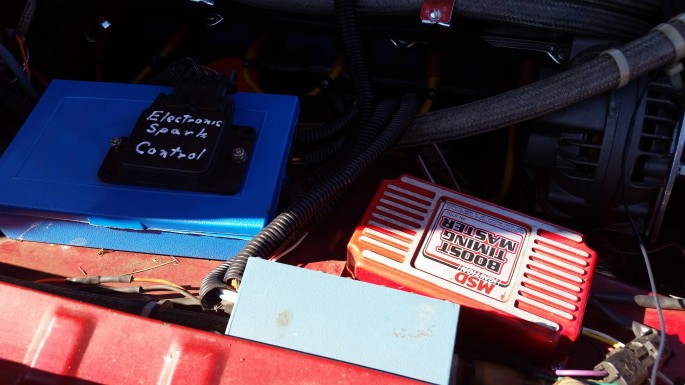 That “Electronic Spark Control” box is actually a plastic crayon box he picked up from a local Walmart. That right there is as exotic as it gets! Functionality always wins over billet and custom milled stuff in my book.

After a few minutes of friendly conversation, we parted ways, as I needed to get that stuff back to my house. We didn’t really have the time to talk power numbers, boost levels, or stuff like that, but that’s ok in my book, because this isn’t a dyno queen. This is a cool everyday driver that was out doing regular car stuff at the grocery store, and if a DIY turbocharged Slant Six drop top Barracuda isn’t Bangshift-Approved, then I don’t know what is!

And Bob, if you are out there reading this, drop us a line, because we would love to hear more about your ride!

This Might Be The Most Perfect Model Of A 1979 Chrysler Cordoba Ever Made, And It Just Sold On Ebay. Guess How Much It Went For! Buy This Ridetech Equipped 1969 Nova For Only $7900!