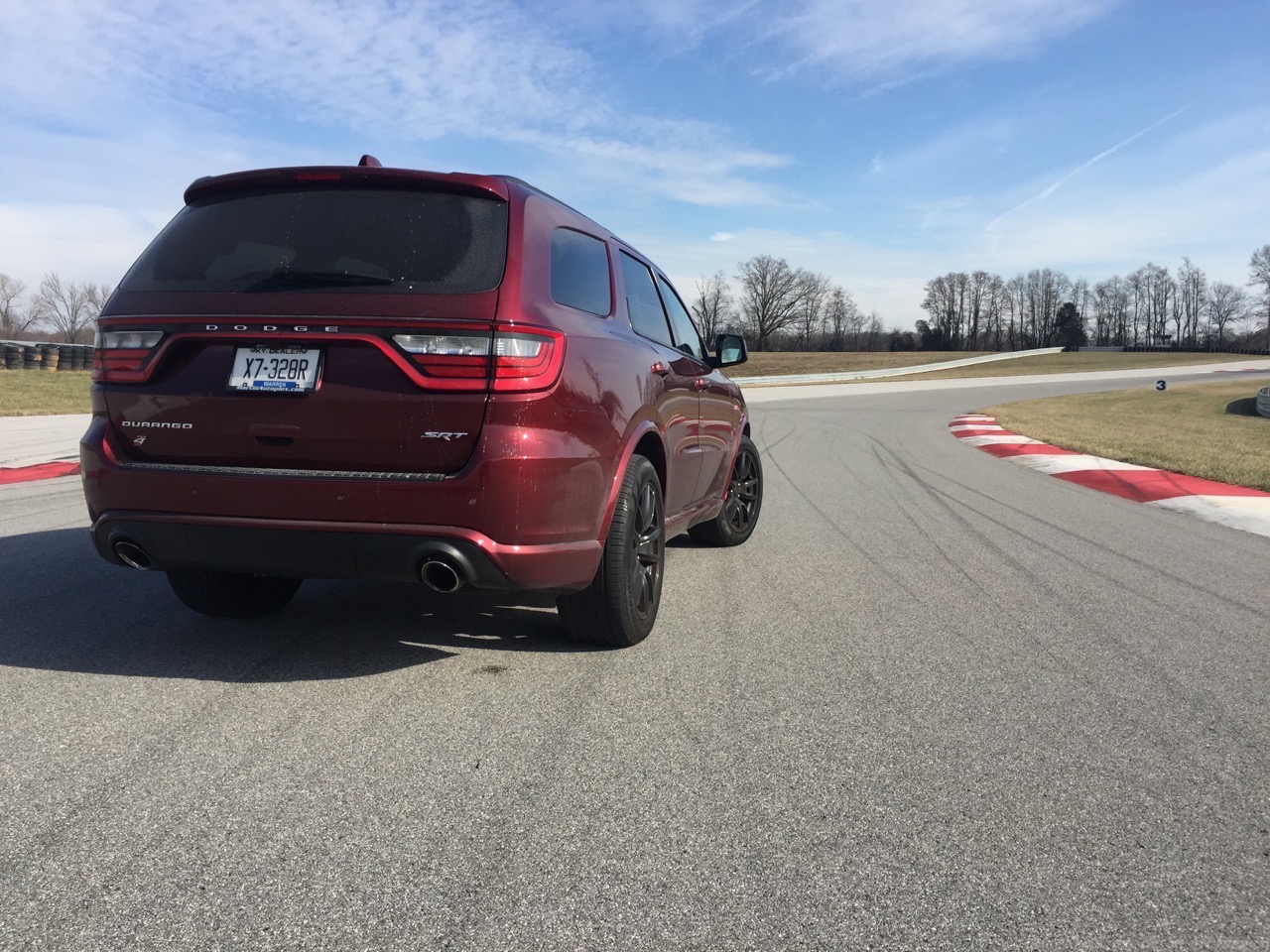 The sports-utility vehicle might have started off as a short pickup with a roof over the bed, but by the time I had become aware of cars, their role as a replacement for the venerable station wagon had been cemented. XJ Cherokees, first-generation Explorers and Grand Cherokees, all usually painted in varying shades of forest green, seemed to be everywhere as families were keen to ditch both the station wagon and the minivan and all of the boring family shuttle connotations that came with them. Which meant that they became the next punchline…the soccer-mom SUV that seated nine and did nothing more exciting that jump a curb while out running errands became the new vehicle to avoid, yet somehow the popularity of the SUV hasn’t crashed like the minivan’s has.

Today, the buyer is spoiled for choice for a sport-utility vehicle…small, medium, large, jumbo, you can get it into your driveway for a price, but what price do you pay for the be-all, do-all vehicle? What is the magical family hauler that doubles as a cargo carrier and, usually, the main V8-powered machine really setting you back? Normally, it’s boredom. Yes, it can tow, yes it can haul items and people, but it isn’t going to stir your soul or anything else, is it? A few try and succeed…the Chevrolet TrailBlazer SS, the GMC Typhoon, and the Jeep Grand Cherokee SRT have earned their places and have proven that the SUV can haul more than groceries. And one of the newest examples of the wonder wagon on the block is the Dodge Durango SRT, a three row unit that has recently gotten the SRT treatment. This means that the 392 Hemi from the Charger/Challenger line has made it under the hood, along with a lot of engineering time spent to make sure that once you drive one, that you don’t walk away thinking “big motor SUV and nothing more”. It’s a comprehensive package that clicks just right…and will leave the gearhead of the family jaw-dropped at what they just drove.

I’ve wanted to drive the Durango SRT since last summer’s Woodward Dream Cruise. We got to look at one there, but we weren’t allowed to even see inside of it. We didn’t even hear it run. I’ve been patient, but I didn’t know when the dealership was going to get one in. The folks at Martin Dodge didn’t wait for me to come into the dealership on the right day. Instead, they shot me a message and told me to move my hide before one got snapped up once it appeared. I guess I have an honest face. Yes, the Octane Red example I got my hands on was dirty…nobody has left this one alone since it arrived! To say this one is something special will require more photos and more words, but understand this: not only were both General Manager Bryan Metzger and Internet Sales Manager Scott Renshaw smiling like Cheshire Cats over having me drive the SRT, they were insistent that I go find somewhere open and have at the throttle at least once…I guess they were making up for my soaked drive in the Hellcat Charger. Read on to learn more… 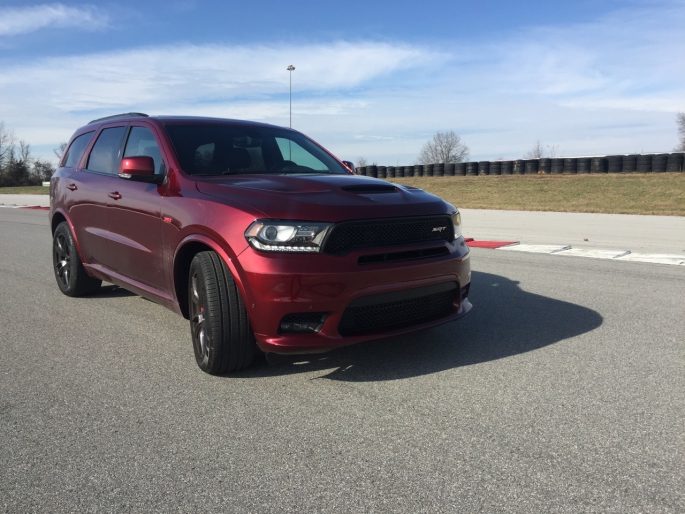 The most obvious difference between the standard variety Durango and the SRT is seen up front: the open grille and the Hellcat-like hood treatment (with functioning heat extractors and intake scoop) give away the intention. A closer look also showcases the subtle fender flares needed to clear the rolling stock. 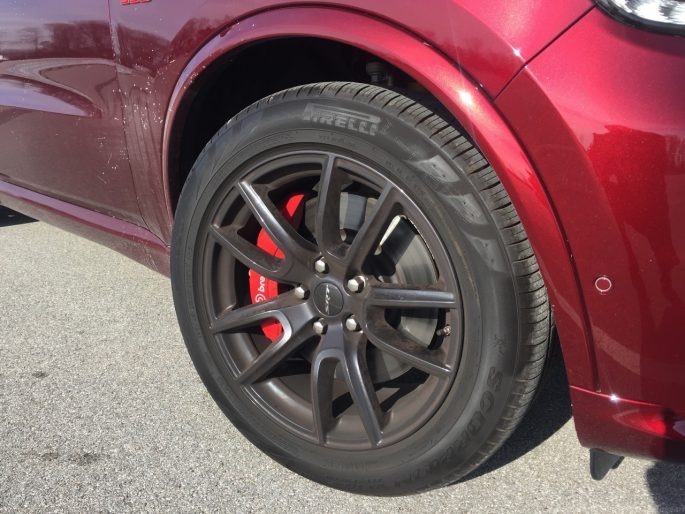 295/45 ZR20 Pirelli Scorpion Verde all-seasons tuck up underneath and offer up a decent ride with minimal tire noise. The brakes are Brembos, 15-inch rotors with six-piston calipers up front, 13.8-inch rotors with four-piston calipers in the rear. When you’re hauling this much ass (both speed and curb weight) having these brakes isn’t just important…it’s a necessity. 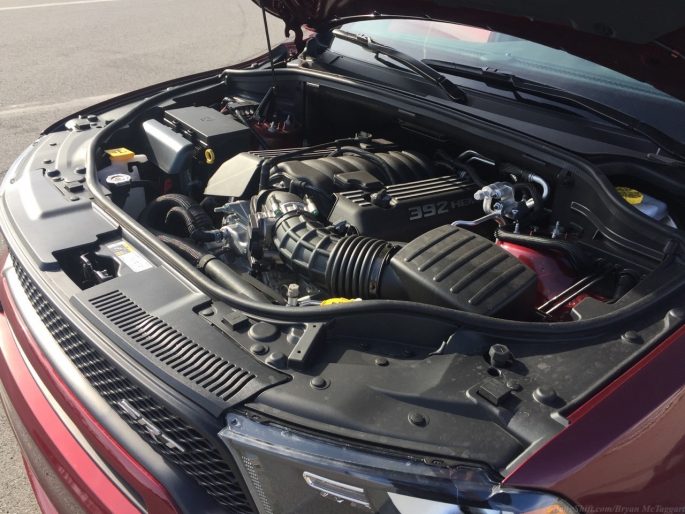 Underhood is a fairly well-known story: the 392 Hemi. 6.4 liters of modern Mopar grunt, cranking out 475 horsepower and 470 ft/lbs of torque. If you’re going to quip “only” 475 horsepower, then go throw your name on the list to buy a Trackhawk and be gone. The Durango SRT can, when equipped with the towing package, cart around 8,700 pounds (that trumps a Chevy Tahoe) and rip a quarter-mile a new one. Dodge claims 12.9 seconds in the quarter, and Car and Driver got [email protected] In a 5,300-plus pound SUV, that’s stout. 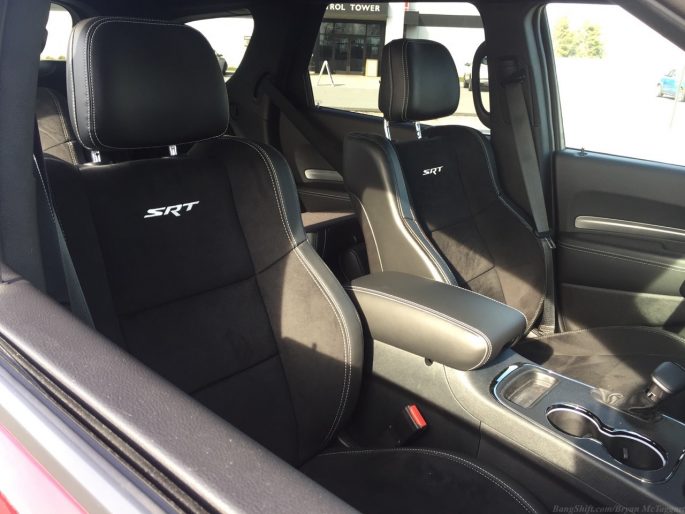 We will make no bones about it…the Durango SRT is going to cost you a pretty penny (think somewhere between $65,000-$72,000). So if you’re going to shell out that kind of money for a hot-rod SUV, it better be damn well worth it, right? The engine doesn’t let you down and the interior puts on it’s best face. The seats in our tester were leather-and-microsuede covered buckets up front, with the foldable second-row captain’s chairs and rear third row skinned the same. I drove this longer than any other vehicle I’ve test-driven, including highway miles, and you will not be lacking for comfort in these chairs. 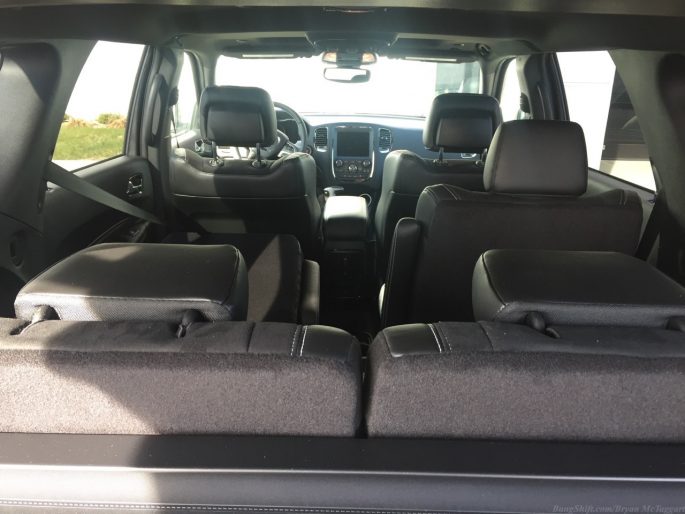 Nor will you be lacking for room. It’s a true three-row SUV, and you might even be able to get adults back in there. Or you could fold down the seats and utilize the cargo space as you need. 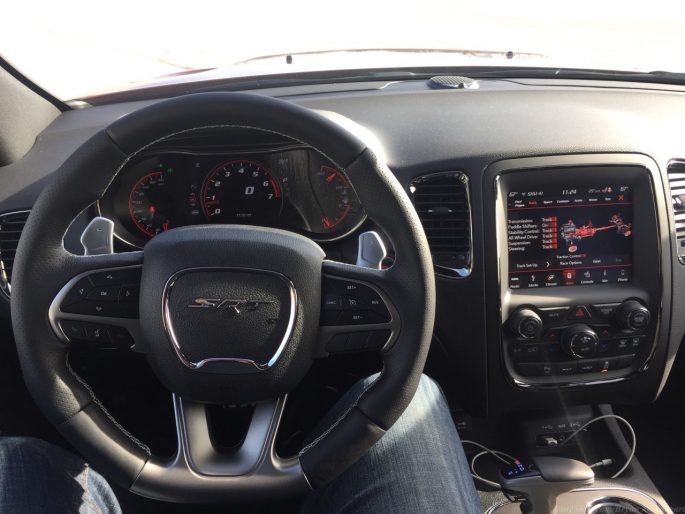 The dash layout is themed along with the rest of Mopar’s modern offerings and functions well. The Uconnect infotainment system still is one of the better ones I’ve dealt with, and the Performance Pages is even easier to work here. The driving modes are no joke…I only operated in two: Track, which causes the Durango SRT to be wound tighter than a watch, and Sport, which got the big SUV to unwind just a touch. The paddle-shifters for the TorqueFlite 8 automatic trans work, but in both Sport and Track the trans does a great job of holding gears and shifting at the right times. 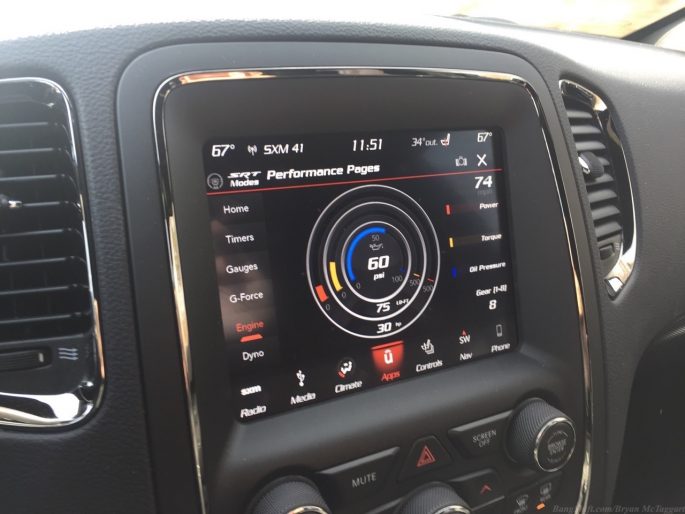 Speaking of the Performance Pages, the Durango SRT has, among other things like auxiliary gauges and the engine monitor (pictured, reminding me that I’m only using thirty horsepower and 75 ft/lbs of torque at speed), an on-board dynomometer that can record up to sixty seconds of information and showcases the shift points for the transmission. Something neat to watch as you’re scaring the hell out of your wife on the next on-ramp of opportunity. 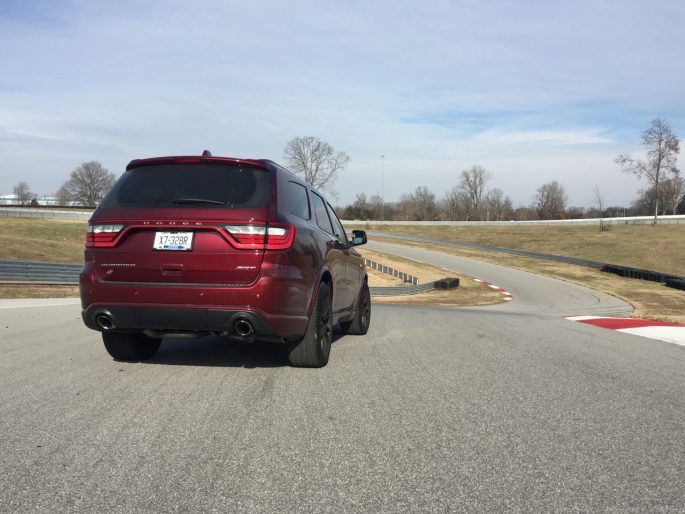 During the key hand-over process, one thing that Metzger suggested that I do was to test out the truck like I meant it. Now, I want you to keep in mind, reader, that what I was encouraged to do with the Durango SRT is basically everything that YOU tell me to do with these test-drives…and they are things that make me nervous because I have no intention of breaking a vehicle or worse, wrecking one. It’s different that the deal that Lohnes has…if something happens while I have the key, it’s on me. That being said, it was a clear, cold day and the sun was out. So… 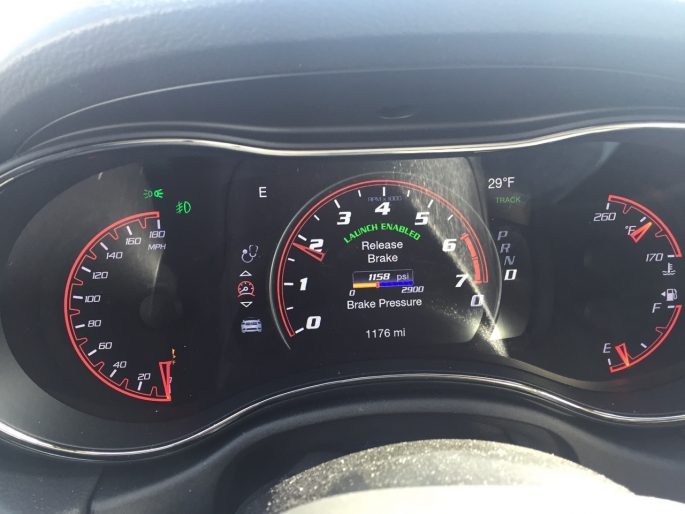 Let’s talk about the Launch Control system. This did get tested out…a couple of times, because the acceleration is wicked. The Durango SRT is AWD and it’s a system that can shove torque rearward as needed. In the Performance Pages, you can configure the RPM limit and the pattern is straightforward: be on level ground, have the steering wheel straight, be in first gear, and be ready for the fun. With one foot on the brake, you bury the throttle and once you get off the brakes, hang the **** on. All four tires dug in and the Durango SRT launched hard enough to remind me that I have nerve damage between my shoulder blades…that’s no joke. 4.4 seconds seems to be the typical 0-60 MPH run, and while I didn’t have enough room to test out the full run on KingSpeed Power and Performance’s concrete apron, there was more than enough room for the two-step rev limiter to kick on and for the Durango to show it’s stuff. 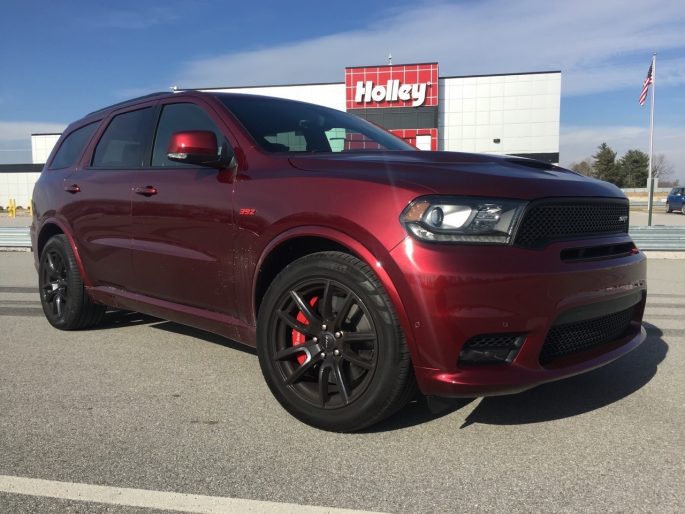 If you have the money to play, the Durango SRT is one hell of an option, but is it a real-deal option for an SUV for every use a family could have? It can haul cargo. It can haul people. It can tow. It can hustle like a modern musclecar. And, the kicker: it drives smaller than it should. What does that mean? A late-model Tahoe feels like a truck. It’s big, it’s roomy, it makes truck-like movements when you work the suspension out. The Durango SRT feels like a tall Charger SRT. The drive is almost car-like…you don’t forget that you’re taller than you would be in the sedan, but every other aspect, from the acceleration to the suspension to the brakes, doesn’t give you the impression that you’re in a hot-rodded truck. It would be easy to just say that the Durango SRT is just a regular Durango with a huge engine, but that isn’t accurate…if it was, the suspension would be playing catchup to the engine’s performance. Not here…we didn’t lap NCM Motorsports Park’s course at full chat (no way I’m doing that in 30-something degree weather) but I did flex the suspension out and trust me…it’s more than capable of embarrassing a lot of cars. It’s a whole-package deal that works very well. Dodge has been trying to build their reputation as a brand of performance…and the Durango SRT is a worthy offering for the SUV market.

Thanks again to Bryan Metzger and Scott Renshaw from Martin Dodge-Jeep-Chrysler-Ram for the opportunity to drive the Durango SRT, to Mike and Chase at KingSpeed Power and Performance for letting me cut loose in the parking lot and to Mitch Wright and Taylor Howard at NCM Motorsports Park in Bowling Green, Kentucky for allowing me onto the track on an off day for the photographs!

Best of 2018: Watch This Steam Tractor Pull A Lowboy Trailer With A Crawler Tractor On It Through An Intersection! Best of 2018: The Lights Out 9 Crash The Whole World Has Been Talking About