Classic YouTube: This Viper Comes Within A Cat’s Whisker Of Slapping The Wall At The Viper Nationals In Texas! 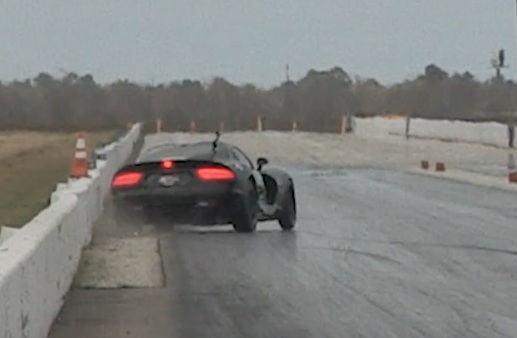 Ma Mopar’s pet snake has been, historically, a car that suffers no fools. From the moment you approach a Dodge Viper, no matter the generation, there isn’t any question that this is not the car for the timid. You want leather and enough safety nannies that you’ll never crash? Stick with something from Germany or Japan, they will treat you with respect. You want a kindler, gentler, safer American? The Corvette will coddle you as you drive from car show to car show. The Viper was meant from the start to be the big, brash, and ready to fight kind of car, and if you didn’t know what you were doing, you were liable to walk away bleeding, crying for your mother. You ALWAYS show the Viper respect, or else. Even as the safety police kept adding in things like airbags, the Viper was always about being stripped-down and as basic as it got. Just you, a V-10 with the temperament of a snarling junkyard dog, and your right foot testing the water between “Nice doggy…” and having your arm bitten off.

This particular late-model example was participating at the Viper Nationals in Houston, Texas. Not once, but twice, does the psychotic coupe hang it’s tail out down the track. While there are suggestions that the differential was playing games, we suspect that a hard third-gear shift might have helped somewhat. But you can see the photo for yourself: that is damn close to that wall. There might be concrete traces on the quarter panel just from the dust that got kicked up as the driver corrected. We imagine that it’s going to take a lot of leather conditioner to get the bite mark out of that seat.

Crispy Fried Ram: Waking Up A Rusty Dodge Truck The Right And "YouTube" Way This Hemi-Powered 1963 Chevrolet Impala Demands Every Ounce Of Respect It Is Owed.

One thought on “Classic YouTube: This Viper Comes Within A Cat’s Whisker Of Slapping The Wall At The Viper Nationals In Texas!”