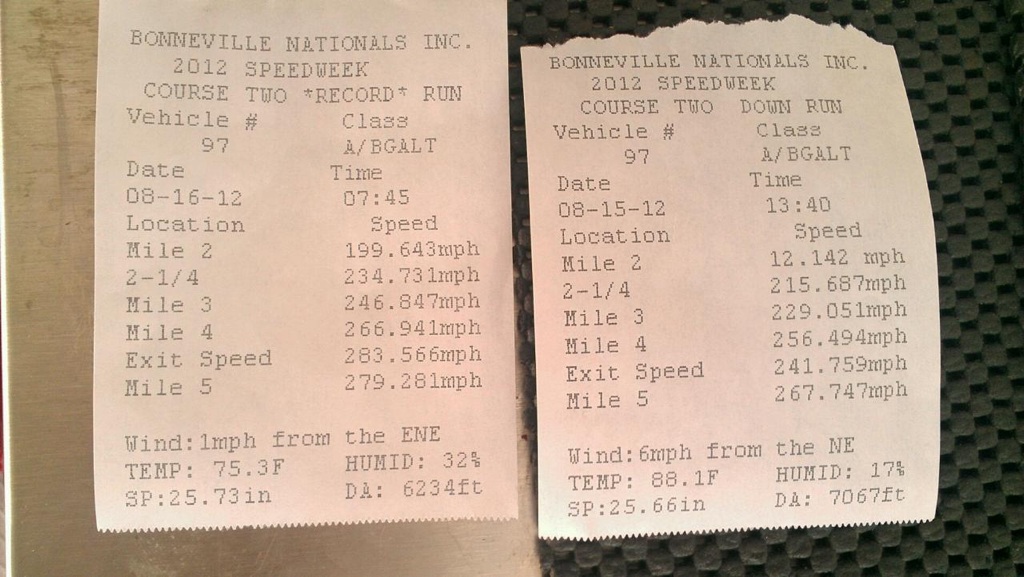 Update Friday: Well it’s all over for Speed Week 2012, and Team Sicilio should be ultra proud of themselves. They came out with a brand new car and in less than a half dozen runs set a record at Bonneville. We know guys that are out there for decades and never get a record. They didn’t get the 300mph run that we were hoping for, but that wasn’t their ultimate goal for this trip anyway. Salt conditions weren’t quite there for a 300 mph run on Thursday afternoon or Friday morning and so they packed up and went home. A second run on Thursday resulted in another 283 mph run with the engine hardly working. This thing has power in spades. The team is planning on going home, doing a full nut and bolt and clean on the car, do a few tweaks, add some more weight, and come back out at the World Finals in October. We’ll keep you posted on details as we get them, but rest assured this car will be back. And I can tell you from first hand exposure to it that 300 will be a doable deal. I’ve never seen a car go as straight as this one. Ryan, Randy, Scott, and Lee should be really proud. We’ll have a full feature on the car coming up on Tuesday (tomorrow) that will show you all the coolness this car exudes.

Update Thursday: Lee Sicilio and his crew put together two strong runs to capture the record in the A/BGALT (451-500 cid engine/ Blown Gas Altered) in their 1969 Charger Daytona. The team ran 267mph yesterday and backed it up with a lap that had an average speed of 279.2 MPH. With that record in hand, the boys are now going to train their guns on the big prize of more than 300mph and potentially the crown of having the fastest door slammer to ever participate in the event. The car is working well and is making enough power to break the tires loose at 160mph but all reports from the cockpit have been good as Sicilio has had no issues driving the car at these heady speeds. The only casualty so far seems to be some paint that is being burned off the by the exhaust head exiting the turbo chargers! We expect the team to make a pass this afternoon and then get after it again tomorrow. If all goes well, they’ll be in impound by the end of the day.

Here are the time slips from the last two runs:

UPDATE – TUESDAY: Once again the crew spent the day tweaking on Lee Sicilio’s ’69 Dodge Daytona and it is working perfectly. Today’s check out pass is their last, and they are now able to run the car however hard they choose. Since it is a new car they will still be working their way up to the records they are after, but the car is working perfectly. In their final checkout pass Lee wheeled the orange winged beast to a 208 mph pass and never exceeded about half throttle, and only with a couple pounds of boost. The team is setting up to run again tomorrow morning and then really go after the records. The coolest thing about following this whole deal was Lee’s comments about how straight the car goes, and how it just doesn’t seem fast since you don’t have to fight it. 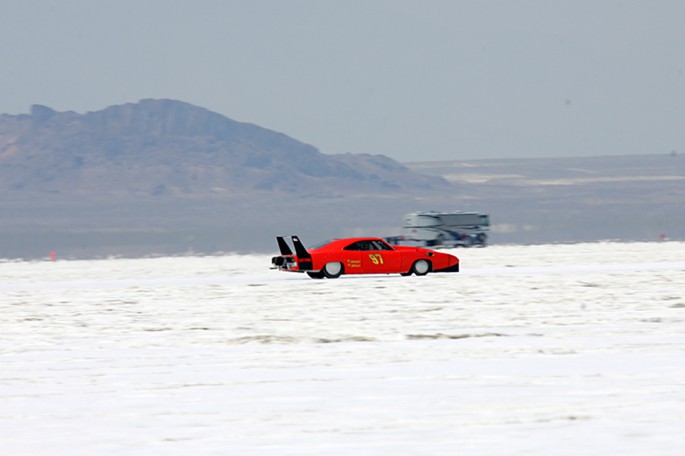 The scary thing is the car ran 208 on what amounts to no boost. With bigger springs in the wastegates, which have been installed, the possibility for running big boost is there. They are still creaping up on it, but have somewhere in the neighborhood of 1500 horsepower still on the table. Oh, and did I mention he hasn't been full throttle yet either?

UPDATE – MONDAY EVENING: Lee and crew made a 178mph pass today. As this is a brand new car the guys wanted a shakedown run to make sure the car would be happy at speeds greater than zero. We’re happy to report that things went well and the big hairy Barton Hemi wasn’t even breathing heavy under low boost and only 4900RPM. Tomorrow the guys plan on stepping on the car softly one last time to make a run at over 200mph before putting on the big boy pants and really letting the big engine sing its song. Chad is hanging out with these guys and will keep us posted as things develop tomorrow, but things are looking good in the Lee Sicilio camp. The real chase for 300mph begins tomorrow. STAY TUNED RIGHT HERE ON BANGSHIFT FOR THE MOST TIMELY NEWS ON THIS, ONE OF SPEED WEEK 2012’s BIGGEST STORIES!

SEE PHOTOS BELOW FROM LEE’S MAIDEN VOYAGE, AND REMEMBER WE’LL HAVE A FULL FEATURE ON THIS CAR SOON. 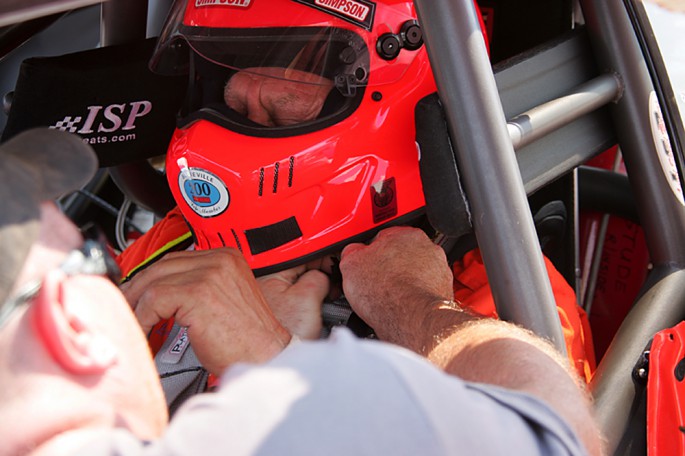 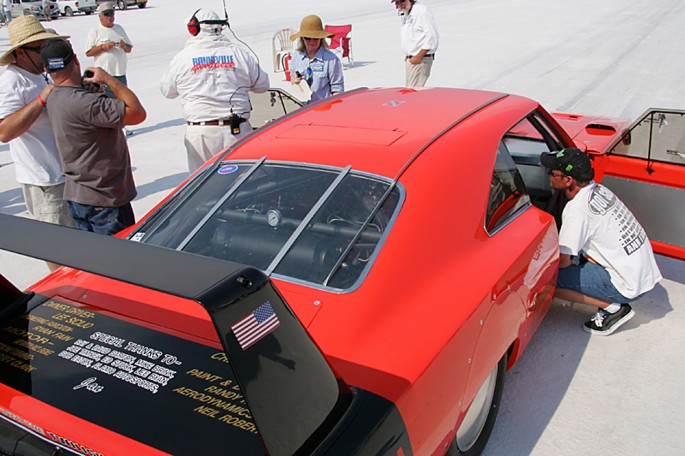 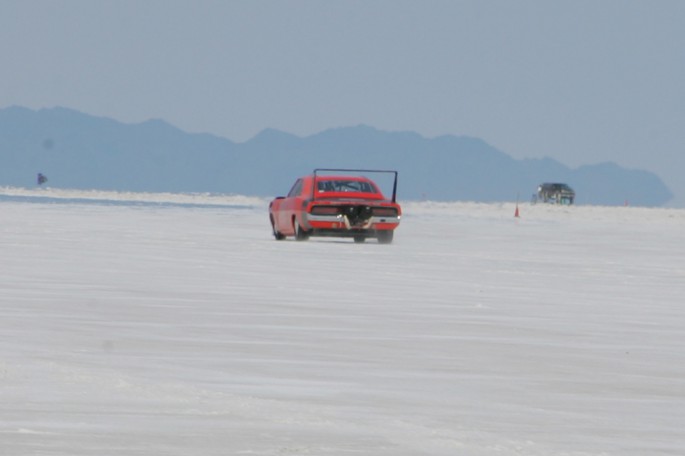 Lee Sicilio has to be one of the nicest Texans ever. And that’s saying something since most folks there are super nice. Lee has been running a 1969 Dodge Daytona out here at Bonneville for several years, and has set a bunch of records. A couple years ago we hooked him up with Scott “Diesel Geek” Clark and not only have they done well, but have also been doing some dreaming. Dreaming about going over 300 mph in a Door Car. And over the past three years, Lee, Scott, Ryan, and Randy with the support of family and friends, have been building what may be the baddest Wing Car ever.

This week they are debuting the car here at Bonneville and will be running on two records A/BGA at 257 and change, and A/BFA at 292 and change, as long as everything goes right,  If all goes real well, they hope to get Lee his Blue 300mph hat which has everyone talking about Blowfish’s 308ish mph ultimate door car record. Blowfish runs in altered as well, which means the top can be chopped and headlights filled and all kinds of other stuff, but who Lee’s car is the production body sans door handles. Ultimately Blowfish has doors, and so does the Daytona so lets see who can be the big dog.

Lee’s Daytona is powered by a Ray Barton built 498 cubic inch Hemi featuring twin Precision 91mm Pro Mod turbos, and the DIY Autotune provided Megasquirt is tuned by Scott Clark. The chassis is all incredibly trick thanks to the skill and time of Ryan Fain who was the builder of the car. Randy Hughes sprayed the paint on it and was pissed that they had to run vinyl decals instead of lettered numbers because he only had a few weeks to paint the car. He insists that will be changed once the car comes home. We think it’s stunning as is. Lee’s wife Jan is the glue that keeps the marbles in Lee’s head from causing too much damage and is amazingly supportive, and is by far the prettiest member of the team. She told us last night that she’s going to have to buy a lot of shoes to keep up with what Lee has put into this project, but it’s all worth it. We agree.

Check out the cool photos below that are a teaser to what we have coming up from our full feature shoot we did here on the salt yesterday. We’ll make updates to this blog item with performance numbers each time they run through the week. 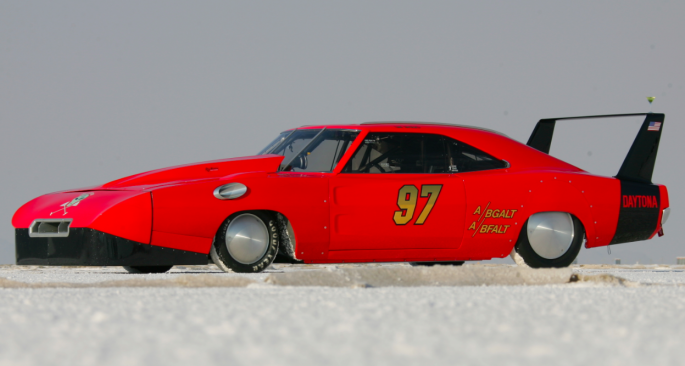 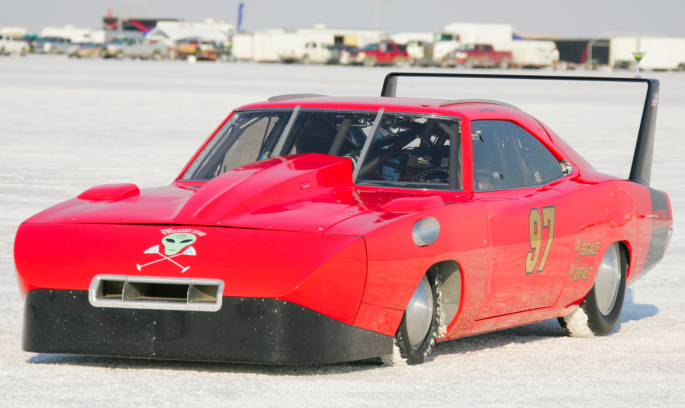 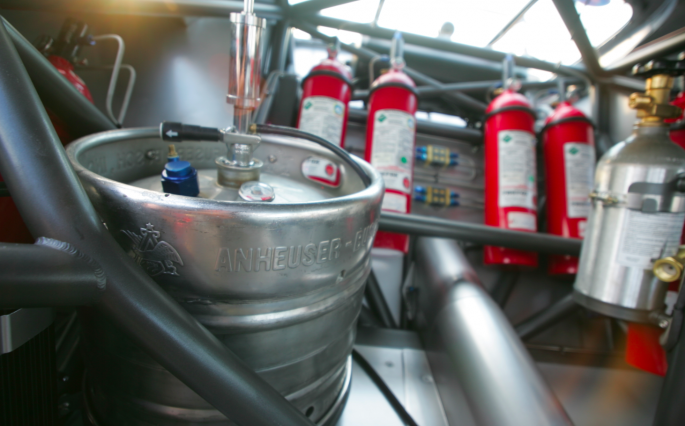 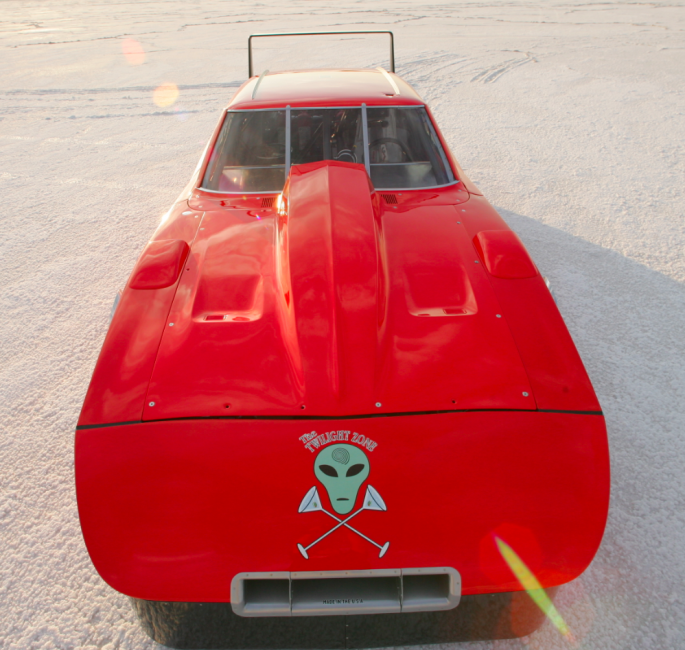