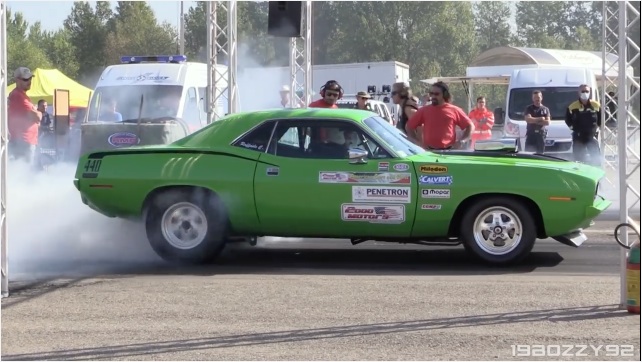 A bright green Plymouth Barracuda isn’t out of the ordinary at the strip. In fact, it should be right at home, tearing tires to bits while running down the quarter mile at full song. We don’t care what’s powering it…small block? Big block? New Hemi? We’ll even take a Slant Six if it’s been built up right. E-body Mopars are some of the most bitchin’ cars to look at and hearing one rocking a 496ci stroker RB big-block that sounds fully pissed off suits us just fine. But there is one thing about this footage: it comes from 19Bozzy92, someone who films at Monza because it’s close by to where they live. That means that this Sassy Grass Green ‘Cuda is living in Italy, home of the Maranello howl. We can’t say that the sound of a Ferrari at full chat is something to avoid…far from it, it’s probably the most Bangshifty part of a Ferrari. But if we have to choose between the two…well, something tells me that I won’t be the only guy picking the Plymouth.

Nightmare For Sale: This 350ci Chevy Powered Kia Could Be Yours For Less Than $3,000 The WTF? Files: Check Out This Flame-Throwing 1984 Mercury Hearse!