eBay Pick of the Week: The F-Troop Gasser

Dec 01, 2008Chad ReynoldsBangShift NewsComments Off on eBay Pick of the Week: The F-Troop Gasser 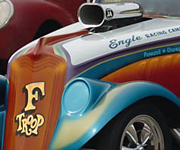 As radical and cool and historic as this is, I don’t think I’d throw down $425,000 for this even if I had Leno kinda money. It’s the F-Troop Willys Gasser, and its story is well told in the auction listing for this week’s eBay Pick. In a nutshell, it was the first Gas-class car on a shortened Funny Car chassis, and while it was quickly outlawed, it struck me that perhaps this very car marked the beginning of the end for the Gas glass. The Prock & Howell car still featured the trad Willys body, though it was a fiberglass flopper, but I think the thoughts behind its construction opened the door for the likes of the Malco Gasser Mustang that, while featuring a rules-required Willys frame, had a different ethic than the Gassers of the ’50s (which were very close to Stockers but with fewer engine limitations) and the ’60s (which are the straight-axle, radiused-wheelwell cars so many are cloning today).

In fact, now that I’m thinking about it, I’m conflicted about the later Gassers, since they reflect an era all of their own. And the F-Troop car exhibits the free thinking that we all admire so much about drag racing of the past. So perhaps I would spend that $425,000 if I had it. But if I did, you could forget the Cacklefests…cuz I’d be out running the thng.