Dec 01, 2008Chad ReynoldsNew ProductsComments Off on The New Weld Wheels 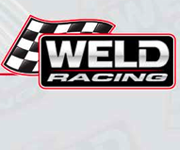 This is kind of old news after the buzz got around at the SEMA show, but we were just copied on the official press release so we thought we’d share with you that Weld Racing has been purchased by a management buyout that includes our friend Kyle Fickler, formerly of Aeromotive. (Both companies are in Kansas City, Missouri.)

Weld will continue to make the P.R.O. Race, and Sportsforged series of wheels (the company also manufactures the American Racing professional wheels), and at the PRI Show next week will introduce the company’s first street/strip wheel series in many years, the Weld RT Series. That seems like a good move to us, as Weld seemed to have lost touch with the average consumer while focusing on race products. The press release says, “The RT Series also solves fitment issues common to many late-model performance applications.” We’re curious to see what that’s all about, and will bring you the news when it hits.

Moran: Quickest and Fastest in the World With Turbos! eBay Pick of the Week: The F-Troop Gasser