Edelbrock Isn’t Dead!!! WTF People?! Their Move From Torrance Headquarters Is No Surprise. Their Foundries Are Staying In California! 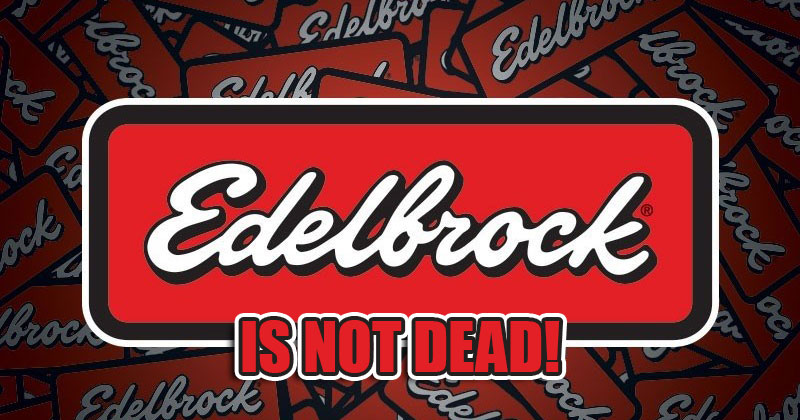 I’m sorry, but the rampant misinformation, ignorance, and flagrant absurdities that have been flying since Edelbrock informed the Employment Development Department of their plans to layoff 270 employees in their Torrance California headquarters facility makes me want to scream. Reporting to the EDD in instances like this is required by California Law, and even if it wasn’t, a responsible employer should. The layoffs come as no surprise, as Edelbrock’s owner, Industrial Opportunity Partners, purchased Comp Performance Group in early 2020 and announced the two performance powerhouses would be joining forces. Throughout the year there have been changes going on at both companies, with the streamlining of resources, operations, and departments to be as efficient as possible in designing, building, and selling high quality performance parts. The point is, Edelbrock isn’t going out of business!

Online publications who are spouting this crap should know better, as they get the press releases on the subject just like the rest of us. This then fuels social media posts by people bitching and moaning about California and blaming the fall of Edelbrock on their location in California. You do understand that Edlebrock is one of the oldest performance brands in the known universe, and has been very VERY successful for the past 80 plus years, all of which have had them manufacturing and selling parts from California. They also cast parts for lots of other performance brands in their California based foundries. Brands that some of you think get all their stuff from somewhere in the mid-west!

Several social media posts, and comments on stories written on other digital media platforms, have uninformed readers claiming that they no longer make anything anyone wants because nobody is building hot rods anymore. WHAT THE F*&K? Here is one of the good ones. “I mean there isn’t really any market for their biggest products anymore – the automotive industry has long changed away from those kinds of things. Sure there’s the people fixing up and hot-rodding older vehicles but even those aren’t nearly as common anymore due to rust and such things.”

Somehow we have become a country where stupid is okay. Someone should change that. I was nominated for the SEMA Board of Directors a couple years ago and when asked what I thought was the most important thing we could do for our industry, with regards to several topics, I said Education. We need to educate the public on what hot rodding, racing, and the automotive aftermarket really encompass so that they know that thinking old cars are cool doesn’t make them bad people. We need to educate enthusiasts on what SEMA really does for them, and what power we all have together, so that we can support the efforts to improve the industry. We need to educate the world on how we can all be good stewards for a clean world, even while owning and enjoying hot rods, so that the public doesn’t look at us as the problem. We need to educate people so that we can all work together to keep our freedoms, and preserve history.

Apparently the last few years have changed things enough that I also need to add that we need to educate people on how to open their eyes, pay attention, and just for one second shut their mouths if they don’t have something worth adding to the conversation. Of course Edelbrock and Comp are going to be reducing overlapping departments, using resources as wisely as possible, and trimming the fat, but that doesn’t mean that last rights should be performed. In fact, this move doesn’t even mean there are any issues at all. Are there challenges with owning a company like this in California? Sure, but Edelbrock has managed to build one of the finest foundry facilities in the country there and that is NOT the part that is leaving. Will it as some point? Maybe. But you can rest assured that if it does, it will only do so when a suitable replacement location, with employees who have the right skills and expertise can be found. I’ll remind you that the majority of the layoffs are positions that do not pose any significant challenge in California. If Edelbrock were located in any other area of the country, their relocation would not be a topic in this conversation. But because they are, it is the ONLY thing that must be causing it.

I’ve spent the last couple of days watching a few of my fellow journalists, some of whom have names and storied histories that command some serious respect, try to inform people that this is not a surprise and that Edelbrock is just evolving now that the company is part of a larger group. Despite having some clue as to the situation, they are being told they are wrong and don’t know what they are talking about.

Edlebrock still has multiple facilities in California, and will likely continue with those operations for years to come. After all, they make some of the finest castings in the country, and relocating foundries isn’t very easy. They also have two North Carolina facilities, and another in Mississippi where Comp Cams has some operations. So don’t you think it makes sense to maybe combine some overlapping business and operations units? Hmmmm. Again, this would not be so dramatic were California not involved.

The truth is that Comp and Edelbrock are moving in together, at their location in Olive Branch, Mississippi, where the headquarters for Edelbrock, Comp Cams, FAST, TCI, and Russell will now be located. This is smart business. And considering that the Edelbrock Comp owners at Industrial Opportunity Partners are actively looking for more companies to add to the Edelbrock Comp group, I’d say business is doing just fine.

Founded in 1938, Torrance-based Edelbrock, LLC is recognized as one of the nation’s premier designers, manufacturers and distributors of performance replacement parts for the automotive aftermarket. Edelbrock produces their core products in the United States of America using state-of-the-art equipment in their world-class manufacturing facilities. Edelbrock, LLC now encompasses six locations including three in California, two in North Carolina and one in Mississippi.

Finnegan And Newbern Spray Nitrous Through A LUV Truck For MINUTES, Melting The Exhaust, And The Tires! The 20-Mile Journey From Shipyard To Sea At This German Shipyard Is The Most Incredible Thing You'll See Today

43 thoughts on “Edelbrock Isn’t Dead!!! WTF People?! Their Move From Torrance Headquarters Is No Surprise. Their Foundries Are Staying In California!”