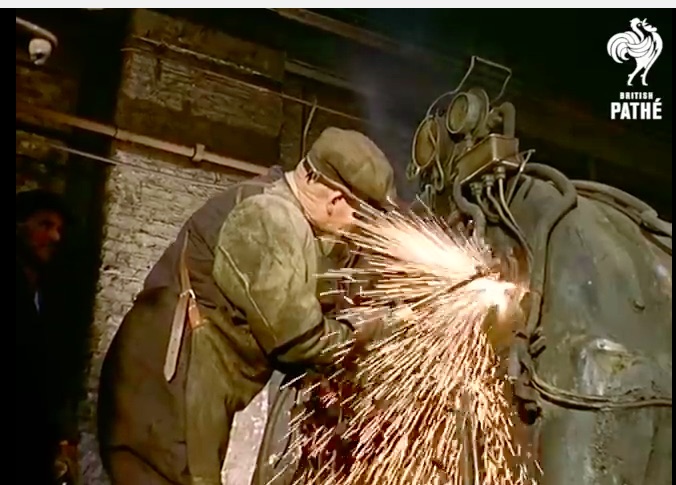 This is a cool hunk of video. Not just because it has old trains in it, not just because it has guys cutting stuff up with torches but because of what it represents. You are going to see locomotives getting scrapped in the 1930s, the 1950s, and the 1960s and they were all being scrapped for different reasons. The locomotives in the late 1930s were being scrapped because newer, better ones were needed and because there was an impending world war on the horizon every was girding for.

The tank engines, steam trains, or however you want to describe them were transformative machines for humanity. It would be interesting (and perhaps someone already has) to look at the direct effect on the world that the steam locomotive have versus the automobile. It would be a sensible argument (to us) to say that the steam engine had a more significant impact on human life than the car. Think of how cultures and people spread, how continents were populated, and how communication changed with the rail.

There’s a line in here where the narrator talks about how sentimentality cannot come ahead of progress or something of that nature. Obviously the guy is right but that doesn’t mean we can’t celebrate the past, right? This summer I am taking my boys to Steamtown USA so we can be among a huge array of these awesome machines. I hope they climb on them and enjoy the now quiet iron horses that transformed the world.

The nature of this work seems to be about as tough and dangerous as the work done to built them in the first place. They did not go together easy and as you will see, they put up just as much of a fight coming apart. This video is 100% BangShift approved.

Classic Video: This 1973 AMC Jeep Dealer Video Is Full Of Jumps and Neat Old Jeeps "We Are QA1", The Video That Shows You Who The Folks Are Behind The Cool Stuff At QA1