Question Of The Day: Sheetmetal Engraving – Is This The Next Big Style Trend? 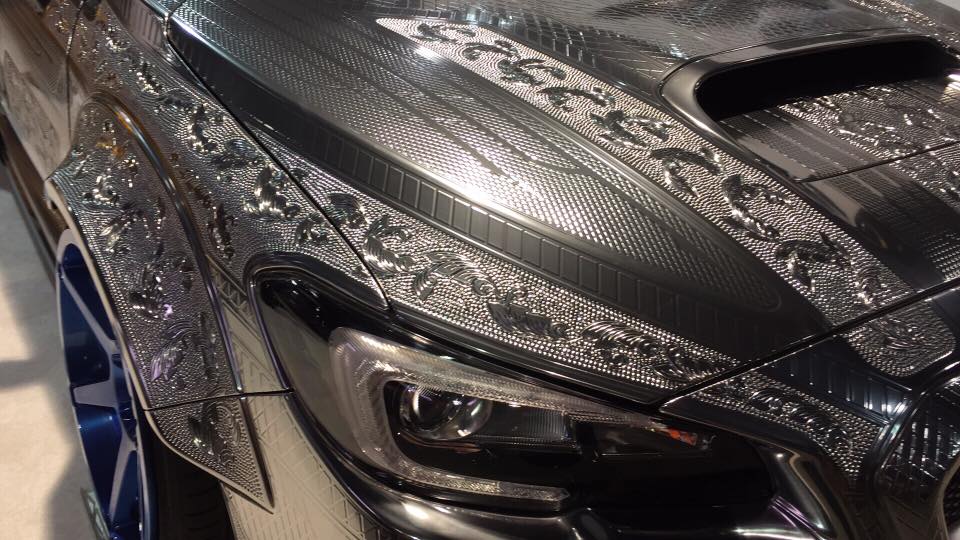 Every year, I walk away from SEMA noting a particular style trend that seems to grab everybody’s attention. Last year, it was using copper accents in place of chrome, brushed aluminum, or whatever have you. This year, as I entered the halls, I wondered to myself what would I see that I would not be able to look away from. I found my answer in the South Hall, in between the entrance and the Mopar exhibit, in the form of a gold Nissan GT-R and a silver Subaru WRX STI: body engraving. 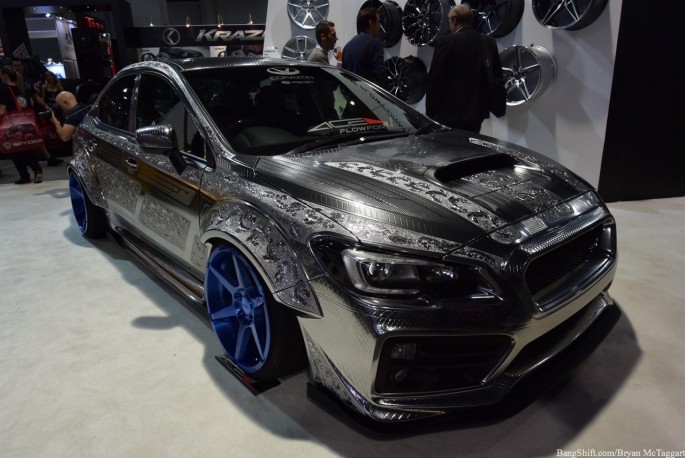 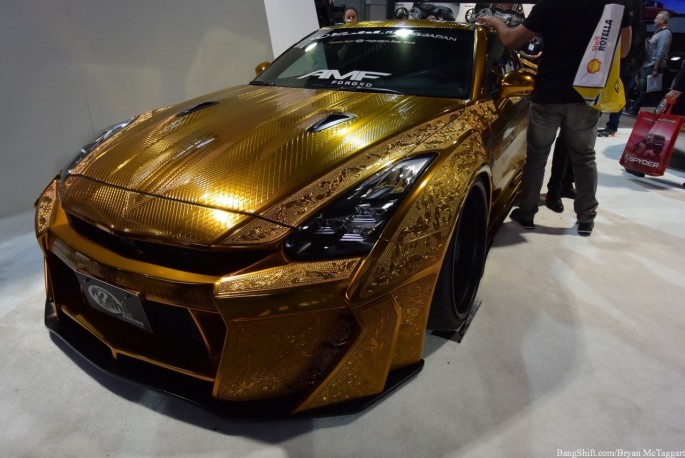 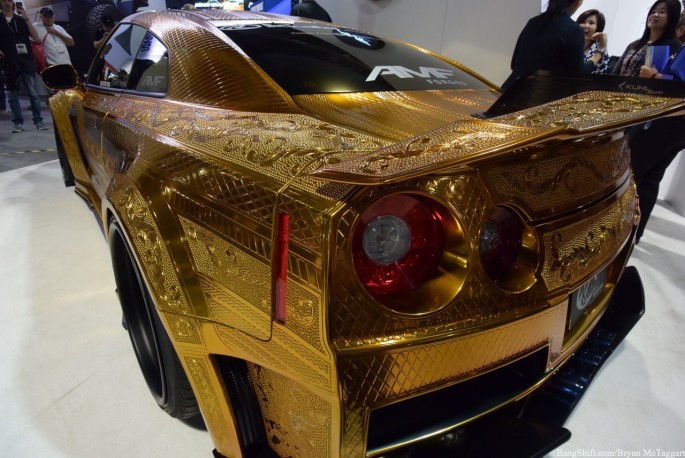 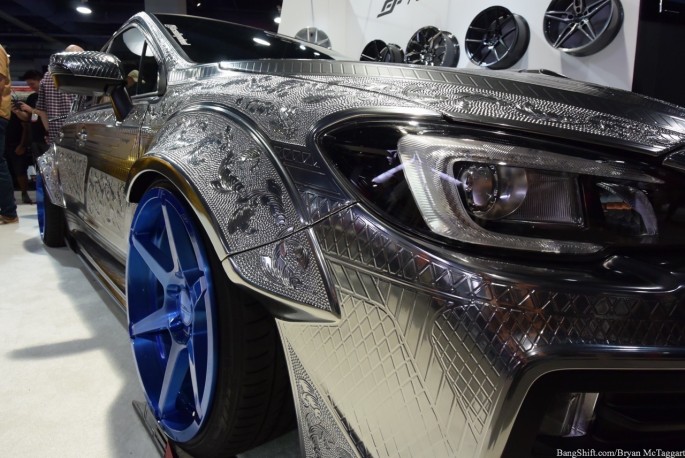 This isn’t a three-dimensional wrap. This is the work of someone with a Dremel tool and the patience of a saint, working countless hours etching these designs into the body of the car. We can’t even scratch our own initials onto our tools without the result looking like we sneezed halfway through the process, yet the results speak for themselves here. And it wasn’t just these two cars, either. 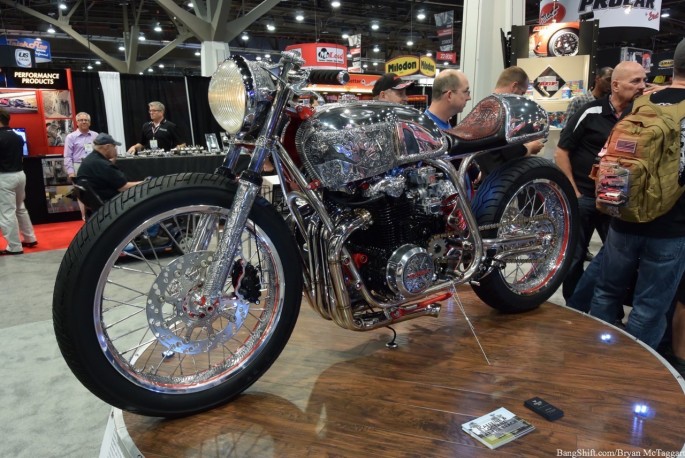 While we believe that the full-body engraving pretty much renders the car, truck or bike down to a rolling sculpture, we wonder if there is merit to detail engraving as part of a design, such as part of a graphic. For example: picture a 1970 Dodge Challenger with the T/A stripe along it’s flank. Now picture that stripe outlined in black against any color you wish, and inside you have engraving that shows silver details. Or even if you look at the silver STI…imagine sections of blue body panels in-between the heavily-worked sections above the headlight, around the fender flares, and near the hoodscoop.

Even if it isn’t your cup of tea, you have to admit that the amount of craftsmanship that goes into engraving a project the size of a vehicle deserves some accolades. At American Force’s outside display, a Ford was getting engraved with a very detailed layout of American soldiers along the entire length of the truck. We’d need the world’s quietest garage to hope to come close to what this guy was able to accomplish with crowds flowing around him, while answering tons of questions. 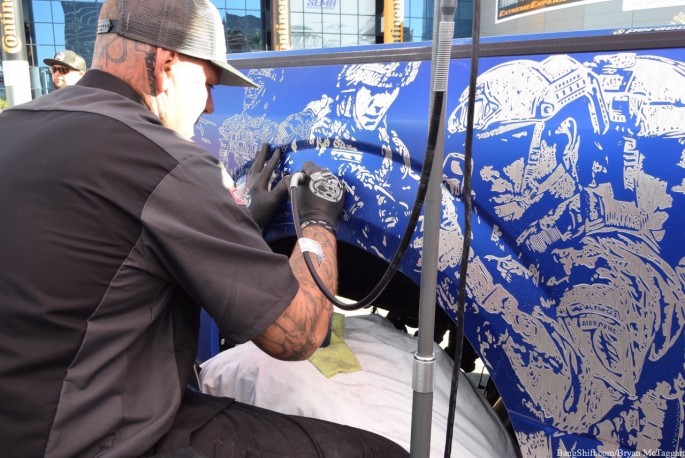 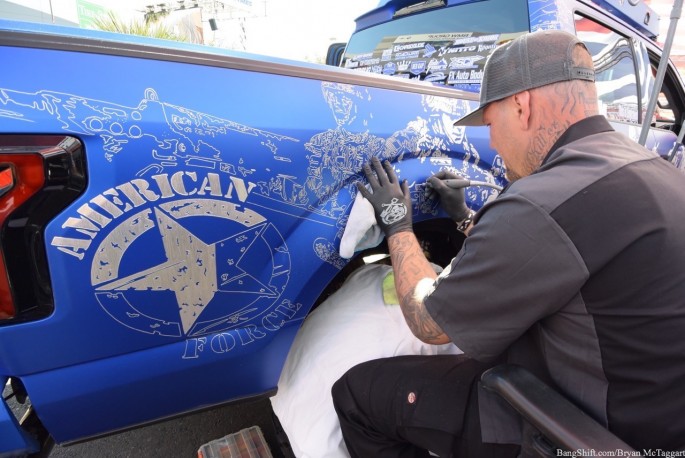 What do you think, readers? Is body engraving a random thing that appeared out of the air this year, or do you see merit in the metal work?

10 thoughts on “Question Of The Day: Sheetmetal Engraving – Is This The Next Big Style Trend?”